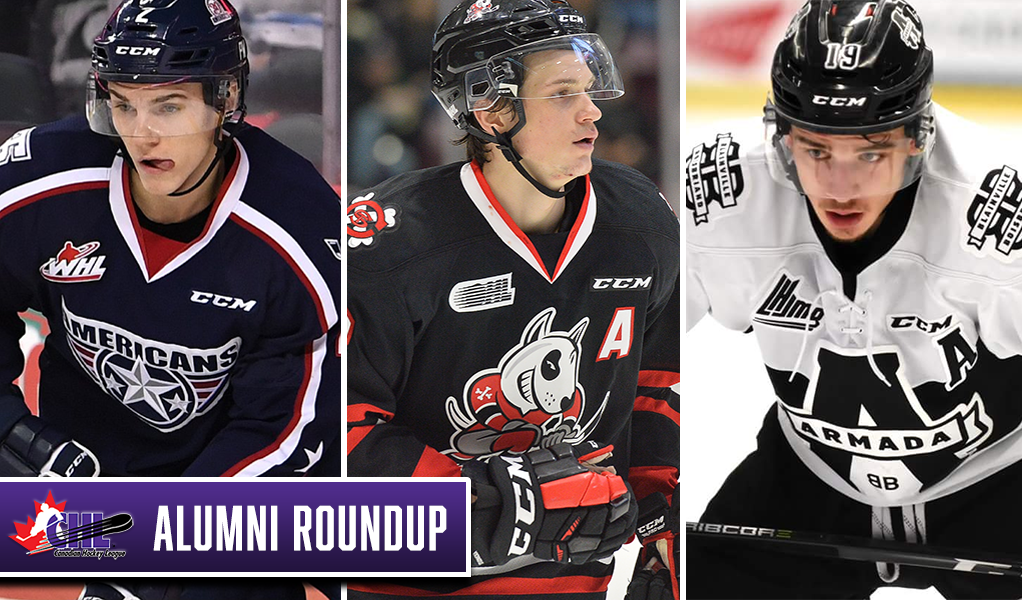 May sure didn’t have been the same on ice excitement we’re used to enjoying this time of year but better days are most definitely ahead.

As we make our way into the summer months, here’s a look at how Canadian Hockey League graduates have been in the news.

The National Hockey League is coming back! Return to play plans were unveiled indicating training camps are hopeful to begin in July which will bring many of the league’s stars back on the ice where they belong. Edmonton Oilers captain Connor McDavid (Erie Otters) was part of the NHL’s Return To Play Committee that helped move things forward and shared his thoughts for NHL.com.

Connor McDavid adopted a bigger-picture vision as a member of the NHL's Return To Play Committee. @TimNHL has the story:https://t.co/gUNnjRRXE4

The league’s announcement to move forward with playoff action upon return brings an official end to the 2019-20 regular season. As such, Leon Draisaitl (Kelowna Rockets) of the Edmonton Oilers is the top scorer and winner of the Art Ross Trophy with 110 points in 71 games.

Another regular season award made official was the William M. Jennings Trophy for the fewest goals against to the Boston Bruins goaltending tandem that includes Tuukka Rask and Jaroslav Halak (Lewiston MAINEiacs).

A stellar season by both @tuukkarask and Jaroslav Halak earns them the William M. Jennings Trophy! #AwardWorthy presented by @Bridgestone ➡️ https://t.co/U8sDDxx4JZ pic.twitter.com/wS9GmouHe5

In light of recent events and the demonstrations that have transpired in cities across North America, it remains clear that the topic of race, inequity, and discrimination in our society is something we all need to address. Athletes around the world are speaking up and using their platform to advocate change. Among the leaders are CHL graduates from the black community like Kevin Weekes (Ottawa 67’s), Evander Kane (Vancouver Giants), Mathieu Joseph (Saint John Sea Dogs), Seth Jones (Portland Winterhawks), P.K Subban (Belleville Bulls), and Anthony Duclair (Quebec Remparts) who have shared their voice on social media.

Today.
Tomorrow.
Every other day. pic.twitter.com/aLnml6hZ0Q

Was on with @FirstTake this morning https://t.co/g58zmNd5kI

WE all have a voice, use it. Help create an environment where WE can all be treated equally. No matter what your race, religion or belief you may have, you should not stay silent about social inequality. Please spread the word. #JusticeForAll https://t.co/dxfkUwn7E9

The fight against COVID-19 continues and wouldn’t be possible without the brave efforts of our healthcare professionals. As part of a widespread social media campaign, graduates like Adam Henrique (Windsor Spitfires) and Doug Gilmour (Cornwall Royals) displayed their jerseys in honour of the real heroes.

This is now a fan account for @stefannoesen’s dogs 😍🐾 pic.twitter.com/Qnaf4ZVP6T

Getting creative with these workouts, eh Erik Gudbranson (@Guddy44)? #HockeyAtHome

Mikhail Sergachev (@sergachev31) is just ITCHING to get back on the ice. 🏒

After a career that included 845 NHL games in which he recorded 174 goals and 398 assists for 572 points, Ales Hemsky has officially retired from hockey. Prior to his NHL tenure the Czech native played two CHL seasons with the Hull Olympiques from 2000-02 producing 197 points in 121 games.

Ales Hemsky has officially announced his retirement after recording 174 goals and 398 assists in 845 regular-season games. Congratulations on an outstanding career Ales and welcome to the #NHLAlumni Association! 👏 pic.twitter.com/sgEyZCYR4E

Last month the American Hockey League officially cancelled all remaining regular season games and the 2019-20 Calder Cup Playoffs. Despite the disappointing news, a number of CHL alumni were honoured for the seasons they had.

Defenceman of the Year honours went to Jake Bean (Tri-City Americans) of the Charlotte Checkers following just his second pro season. The 21-year-old from Calgary and first round selection of the Carolina Hurricanes in the 2016 NHL Draft led his team and all league rearguards in scoring with 48 points in 59 games.

Jake Bean of the @CheckersHockey is the winner of the Eddie Shore Award as the AHL’s outstanding defenseman for the 2019-20 season.

Coach of the Year was awarded to Karl Taylor (London Knights) of the Milwaukee Admirals after finishing first in the regular season standings with a 41-14-5-3 record. The second year bench boss had previously served as an assistant for the Texas Stars for four years after one season with the Portland Winterhawks in 2013-14.

.@mkeadmirals head coach Karl Taylor is the winner of the Louis A.R. Pieri Memorial Award as the AHL’s outstanding coach for the 2019-20 season.

The Admirals also allowed the fewest goals against during the regular season and were the recipients of the Harry ‘Hap’ Holmes Memorial Award. Part of the tandem was Connor Ingram (Kamloops Blazers) who won 21 of his 33 appearances while posting the league’s third best goals-against-average at 1.92 along with a .933 save percentage.

Six of the 12 players named across the First and Second AHL All-Star teams are also CHL graduates. The first team includes Bean on defence alongside Brennan Menell (Lethbridge Hurricanes), plus Reid Boucher (Sarnia Sting) at left wing. Menell, who signed a free agent contract with the Minnesota Wild in 2017, scored a career high 47 points in 57 games in Iowa which was second among league blue liners behind Bean. Boucher also set a career high with 67 points in just 53 games for the Utica Comets to finish second in league scoring but first with a 1.26 points-per-game average. Since joining the Vancouver Canucks organization he’s appeared in 48 games with the parent club.

Ingram is the backbone of the second team that also includes a pair of Blainville-Boisbriand Armada grads like Alex Barre-Boulet at centre and Drake Batherson at right wing. Barre-Boulet followed his rookie of the year campaign with the Syracuse Crunch by finishing fifth in AHL scoring with 56 points in 60 games. He signed with the Tampa Bay Lightning as a free agent in 2018 before winning CHL Player of the Year honours. Batherson also just wrapped up his second pro season for the Belleville Senators scoring 54 points in just 44 games. He was a fourth round pick by Ottawa in the 2017 NHL Draft and played in 23 games with the parent club this season.

A trio of recent CHL grads were also named to the AHL’s All-Rookie Team including defenceman Joey Keane (London Knights), plus forwards Alex Formenton (London Knights) and Jack Studnicka (Niagara IceDogs). Keane totaled 37 points in 58 games between the Hartford Wolf Pack and Charlotte Checkers after the New York Rangers third round pick in 2018 was acquired by the Carolina Hurricanes in February. Formenton, a second round pick by the Ottawa Senators in 2017, produced 53 points in 61 games for Belleville who led the league in offence. Studnicka, a second round pick by the Boston Bruins in 2017, led the Atlantic Division champion Providence in goals (23), assists (26) and points (49) over 60 games while tying an AHL rookie record with seven shorthanded goals.

Also making AHL headlines were a trio of Soo Greyhounds grads who were integral members of the club’s record breaking 2017-18 season and are now developing into sound pros. Get the latest updates on Syracuse’s Boris Katchouk, Lehigh-Valley’s Morgan Frost, and Ontario’s Matt Villalta.

After spending two seasons with the @SyracuseCrunch, prospect Boris Katchouk is confident that he's close to making the @TBLightning.

“He’s the most skilled player I’ve had in @LVPhantoms since I’ve been here, for sure."

Morgan Frost is well on his way to a permanent spot in the @NHL.

.@ontarioreign netminder Matt Villalta showed that he could compete at the pro level this season.

Moving on to U SPORTS, the accolades continue to pour in for former Seattle Thunderbirds goaltender Taran Kozun who has been nominated for the Lieutenant Governor Athletic Award presented to the U SPORTS Male Athlete of the Year. Currently competing with the Canada West playoff champion University of Saskatchewan Huskies, Kozun concluded the 2019-20 campaign in earning recognition as both the U SPORTS Player and Goaltender of the Year.

CHL graduate and 1989 Memorial Cup champion Sheldon Kennedy (Swift Current Broncos) has been named part of Canada’s Sports Hall of Fame Class of 2020-21 and presented with the Order of Sport Award which is Canada’s highest sporting honour. A co-founder of the Respect Group Inc. with Wayne McNeil, Kennedy has been instrumental in the establishment of national programming to educate and empower athletes and sports leaders on the importance of respect. He’ll be inducted as a Builder for Ice Hockey.

Congratulations to our co-founder @ShelKenn on receiving the Order of Sport award 2020! 👏

We are forever proud of Sheldon’s tireless crusade to prevent maltreatment in sport. This award is a great acknowledgement of that incredible contribution!https://t.co/iR8FtOrllV pic.twitter.com/kQVZhNgz3a