May ushers in Championship action across the CHL 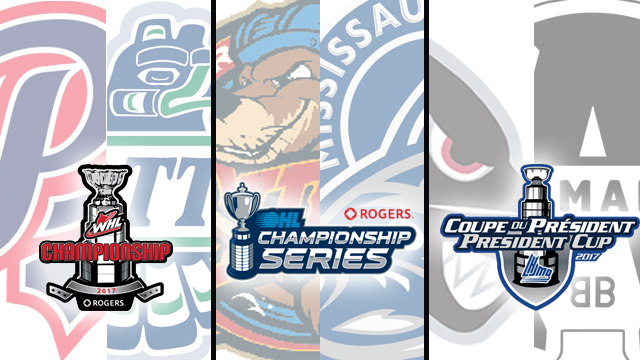 With the month of May comes Championship action across the Canadian Hockey League as seven teams are all that remain on the road to the 2017 Mastercard Memorial Cup.

In addition to the host Windsor Spitfires, the WHL’s Regina Pats and Seattle Thunderbirds, the OHL’s Erie Otters and Mississauga Steelheads and the QMJHL’s Saint John Sea Dogs and Blainville-Boisbriand Armada remain on the road to the 2017 Mastercard Memorial Cup that begins on Friday May 19th.

The top seed from each of the three leagues has successfully emerged to reach their respective championship, but the CHL Playoffs hasn’t gone without its surprises along the way.

Beginning in the Western Hockey League, the first place Regina Pats took an adventurous path to the Rogers WHL Championship Series, overcoming a 3-1 series deficit to eliminate the Swift Current Broncos in seven games before going down 2-1 against the Lethbridge Hurricanes only to win four straight in the Eastern Conference Final.

Regina fell behind Lethbridge 3-0 in Game 6 before roaring back on the road to win 7-4 and advance to their first WHL Final since 1984.

“(Winning the East) obviously means a lot,” Pats head coach and general manager John Paddock told Greg Harder of the Regina Leader-Post. “It shows the commitment from the owners down through (the coaches) and we have a really committed group of players. When you’re committed and you have good players, then you have a chance to do something (special). To date our regular season and playoffs have been fantastic … but there’s another series to go.”

With the Pats on the heels of 11 consecutive playoff sellouts at the Brandt Centre, fifth-year veteran Adam Brooks and his club prepare to face a Seattle Thunderbirds squad that recently eliminated the ever-competitive Kelowna Rockets 4-2 in the Western Conference Final thanks to great goaltending from 17-year-old rookie Carl Stankowski.

The first goaltender taken in the 2015 WHL Bantam Draft, Stankowski saw just seven regular season games before bursting onto the scene in the playoffs after veteran Rylan Toth went down with an injury. The Calgary, AB native has played to a 12-1-1 postseason record with a 2.48 goals-against average and a .913 save percentage, earning WHL Goaltender of the Week honours this past week.

The Thunderbirds got by the Rockets without the services of star defenceman Ethan Bear in the final three games of the series. New York Islanders prospect Mathew Barzal flashed his dynamic offensive skill with a goal and nine assists in the series while steady penalty killer and unheralded presence Donovan Neuls was one of Seattle’s best, recording a goal and four assists.

Seattle returns to the Rogers WHL Championship Series after being swept by the champion Brandon Wheat Kings last spring.

The Otters knocked off the defending Mastercard Memorial Cup champion London Knights on Warren Foegele’s overtime winner in Game 7 of the second round. They then proceeded to get the better of an up-and-coming Owen Sound Attack club in six games thanks to big contributions from another mid-season addition in Tampa Bay Lightning prospect Anthony Cirelli.

Cirelli earned CHL Player of the Week honours with nine points including four goals and five assists in four contests last week. That award was joined by a pair of honours handed to fifth-year veteran Darren Raddysh who has been named both the OHL’s Overage Player of the Year and Defenceman of the Year, becoming the first player in league history to capture both in the same season.

“Our main goal is to win a Memorial Cup,” Raddysh told media following Erie’s Game 6 victory in Owen Sound on Sunday. “This is just another step in what we’re trying to accomplish here.”

Dylan Strome, Alex DeBrincat and the Otters are up against one of the hottest teams in the country in the Eastern Conference champion Mississauga Steelheads.

The Trout enter the series on an eight-game winning streak following a series sweep of the Peterborough Petes in which they outscored their opponent 17-4.

Mississauga goaltender Matthew Mancina is a back-to-back Vaughn CHL Goaltender of the Week recipient, going 4-0-0-0 with a 0.89 goals-against average and a .963 save percentage with two shutouts in the Peterborough series.

Having finished with 22 less points than the high-powered Otters in the regular season, the Central Division champion Steelheads know they’re underdogs on paper, but James Richmond’s club is playing its best hockey right now.

The worst team in the OHL on December 4th, the Steelheads put together a great second half and have hit their stride at the right time.

“Going back to December 4th, we’ve been playing some very good hockey since then,” Richmond said following Game 4 of the Peterborough series. “The guys are really believing in each other. It shows on the ice, it shows off the ice and I’m really happy to be coaching them right now.”

Moving eastward, the Quebec Major Junior Hockey League Finals are set as the top-seeded Saint John Sea Dogs prepare to battle the fifth place Blainville-Boisbriand Armada. Games 2 and 4 of the series will be a featured on Sportsnet 360.

A fixture in the weekly CHL Top-10 throughout much of the season, the Sea Dogs have continued their upward trajectory into the playoffs, rolling past the Rimouski Oceanic, Val-d’Or Foreurs and Chicoutimi Sagueneens while going 12-2 in the process.

The Sea Dogs won one of their two regular season encounters against Blainville-Boisbriand, a club that has overcome the Drummondville Voltigeurs, Acadie-Bathurst Titan in seven games and the Charlottetown Islanders in the semis to reach their first ever President Cup Final.

The Armada lost their opening matchup against Charlottetown before proceeding to rattle off four straight wins and dispose of the Islanders in five games. The Isles are ousted following a 46-win season, their highest total since the franchise moved to Charlottetown to begin the 2013-14 season.

Blainville-Boisbriand’s power play has been lethal throughout the postseason, going 20-for-61, a 32.8 percent efficiency rate.

Veteran forward Alex Barré-Boulet leads the QMJHL Playoffs in scoring with 29 points (14-15–29) over 16 games. He and Columbus Blue Jackets prospect Pierre-Luc Dubois (8-13–21) have steered the Armada’s offensive ship through the postseason while Florida Panthers prospect Samuel Montembeault has held down the fort in goal with a 1.95 goals-against average and .923 save percentage.

The OHL Final gets underway on Thursday in Erie before the WHL and QMJHL Finals open in Regina and Saint John respectively on Friday night. The winner of each series will advance to the 99th Mastercard Memorial Cup, joining the host Windsor Spitfires when the puck drops on Friday May 19th.