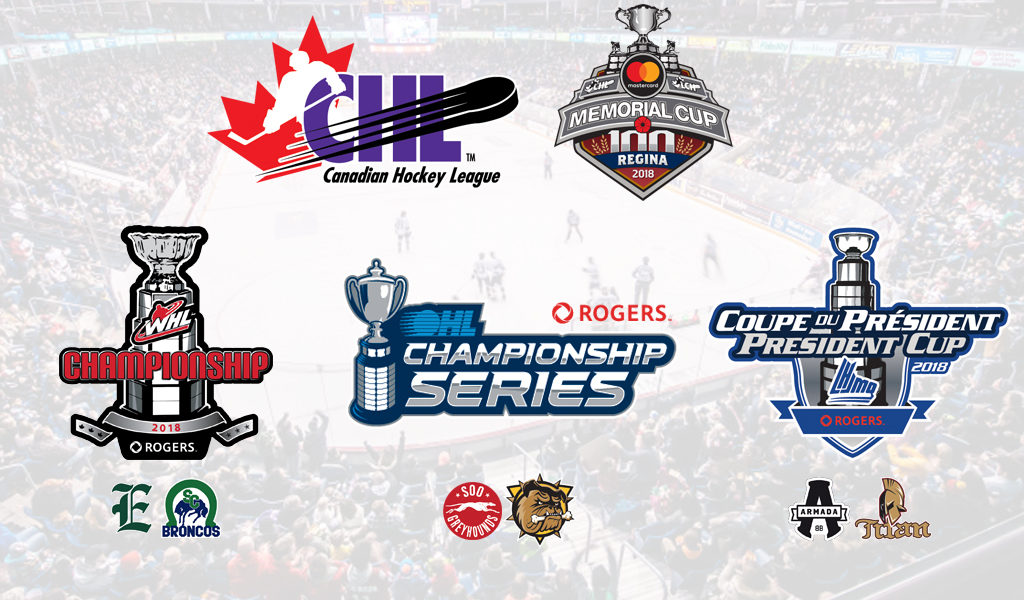 The Ed Chynoweth Cup, J. Ross Robertson Cup and President Cup are all on the line this week as Championship play gets underway from coast-to-coast.

While hoisting these prestigious trophies is the immediate goal, a championship crown also opens a gateway to Regina for the 100th Mastercard Memorial Cup Showcase where four teams will battle for national supremacy and the coveted Memorial Cup trophy.

The matchups are set as the Everett Silvertips, Swift Current Broncos, Sault Ste. Marie Greyhounds, Hamilton Bulldogs, Blainville-Boisbriand Armada and Acadie-Bathurst Titan are left standing, fighting for a chance to join the host Regina Pats in the Queen City starting on May 17th.

Here’s an overview of the three league championship matchups that get underway beginning in Sault Ste. Marie on Thursday night.

The cream has risen to the top in the Ontario Hockey League as both first-place clubs from the Western and Eastern Conferences have emerged as league finalists.

The Hounds are the first West Division team to reach the Final since the 2010 Windsor Spitfires went on to win their second of back-to-back Mastercard Memorial Cup titles.

It’s been a long time coming for the Greyhounds, who have returned to their early 90’s dominance that saw them win back-to-back OHL Championships in 1991 and 1992 before hoisting the Memorial Cup on home ice in 1993.

Powered by Tampa Bay Lightning prospects Boris Katchouk (15-13–28) and defending OHL champion Taylor Raddysh (12-15–27) up front, the Hounds come off their best season in franchise history, finishing the campaign as the CHL’s top-ranked club with a 55-7-3-3 record.

The Bulldogs have cruised to three-straight five game series wins over Ottawa, Niagara and Kingston, getting contributions from up and down the lineup. St. Louis Blues first round pick Robert Thomas (8-17–25) and mid-season acquisitions in Ryan Moore (7-14–21) and Nicholas Caamano (6-12–18) have been prominent producers while fourth-year centreman Brandon Saigeon (12-4–16) leads the team in playoff goal-scoring.

The City of Hamilton’s OHL history includes a 1978 finals appearance by the Fincups which was preceded by a 1976 title, while the 1962 Hamilton Red Wings were also Robertson Cup champions.

The two clubs split their two meetings during the season series, with Hamilton winning 5-2 on February 11th before Sault Ste. Marie struck back in a big way, defeating the Bulldogs 10-0 at home on February 16th.

The Swift Current Broncos have emerged from a highly competitive Eastern Conference to face an Everett Silvertips club that boasts the CHL’s stingiest defence after surrendering just 167 goals over 72 games.

An intriguing matchup between two clubs that met just once during the regular season, the Broncos open the series on home ice with Games 1 and 2 on Friday and Saturday at the Credit Union I-Plex.

Swift Current has had quite a ride through the WHL Playoffs, requiring back-to-back Game 7 finishes to oust provincial rivals in the Regina Pats and Moose Jaw Warriors in the opening two rounds. A six game series triumph over the Lethbridge Hurricanes crowned them Eastern Conference champs for the first time since 1993.

In goal, long-time WHL veteran Stuart Skinner has been one of Swift Current’s biggest difference-makers throughout the playoffs, posting a 2.32 goals-against average, .927 save percentage, 12-6-2 record and four shutouts. The Edmonton Oilers prospect squares off against back-to-back WHL Goaltender of the Year Carter Hart who has backstopped the Silvertips to their first Western Conference title since 2004.

While he has received high praise throughout the season, it’s hard to overlook the contributions of the Canadian World Junior gold medalist between the pipes in Everett. The Philadelphia Flyers prospect posted a minuscule 1.60 goals-against average and .947 save percentage in 41 games this season, tying the CHL’s all-time shutouts record with 26 in his regular season career.

Everett took a path through the U.S. Division to reach the WHL Final, eliminating the Seattle Thunderbirds and Portland Winterhawks in five games before fifth-year blueliner Kevin Davis (3-11–14) stepped up with the Game 6 overtime winner to oust the Tri-City Americans on Monday.

Everett defeated Swift Current 4-1 in their lone meeting back on January 21st.

The QMJHL’s top-two teams clash for the President Cup beginning Friday night in Blainville as the host Armada take on the Acadie-Bathurst Titan.

The QMJHL’s only 100-point team, Blainville-Boisbriand sat wire-to-wire atop the standings before eliminating the Val-d’Or Foreurs and Moncton Wildcats in short order. The Armada required seven games to dispatch the Charlottetown Islanders, taking a 6-1 win at home on Tuesday as star veteran Alexandre Alain had three goals and two assists.

The Armada return to the President Cup Final after falling to Saint John last year, but face a new challenge in Acadie-Bathurst, a team they defeated by one-goal margins in each of their two encounters this season.

In goal, St. Louis Blues prospect Evan Fitzpatrick leads the QMJHL Playoffs with a 1.99 goals-against average to go with a .927 save percentage and 12-2 record over 14 games.

The Titan won their first Maritimes Division title since 2002 this past season and have their sights set on the franchise’s first President Cup since its inaugural season back in 1999.