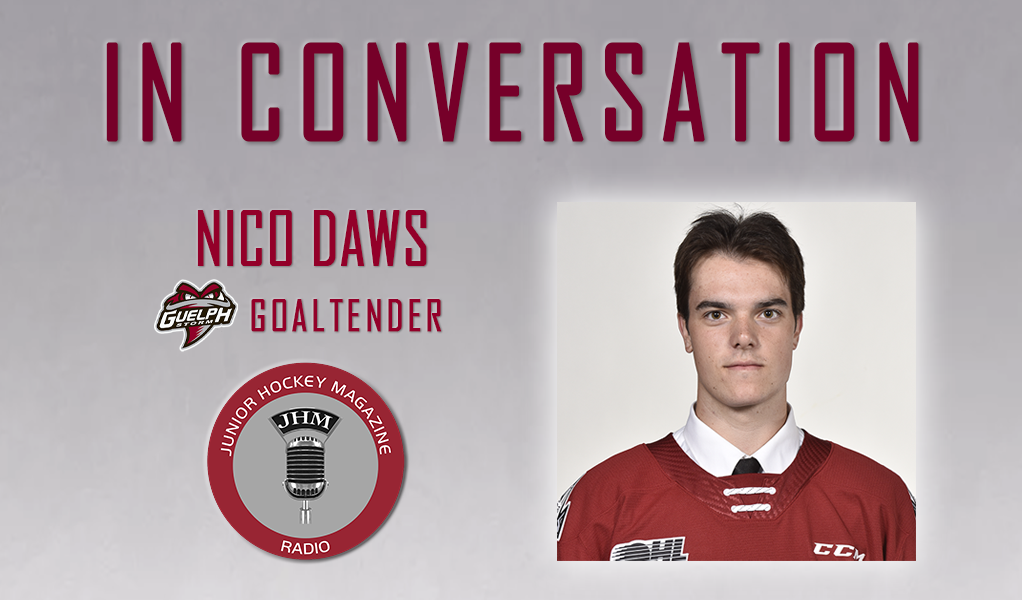 It’s been a season of renewal for Nico Daws.

After going unselected in last year’s NHL Draft, a determined Daws took the offseason to reinvent his game, returning to training camp with a slimmer look, helping him lock down the starter’s role for the first-time as a third-year junior.

That success continued between the pipes, earning Daws invites to marquee events including the 2020 IIHF World Junior Championship where he was one of five draft eligibles to help Canada capture its 18th gold medal at the acclaimed international showdown. With the Storm, Daws has been a force in the blue paint as he leads the OHL in both the goals-against average (2.36) and save percentage (.927) columns, solid showings that now see him rank first among all North American netminders ahead of the 2020 NHL Draft.

Daws recently chatted with Junior Hockey Magazine about his offseason efforts, his experiences on the international stage, as well as his thoughts ahead of the 2020 NHL Draft in Montreal:

Junior Hockey Magazine: I know you weren’t the starter for the latter part of the World Juniors, but overall how special was it to win gold with Team Canada?

Nico Daws: It’s something that you dream of. You grow up watching the World Juniors. I remember at young ages going into my parents’ bedroom and turning on the TV for those early morning games and waking everybody up. It’s something you dream of as a kid and to bring home the gold is a real special feeling.

JHM: What was your relationship like with Joel Hofer and how close did you guys get?

ND: All three of us – me, Hofer, and Olivier Rodrigue – we all got really close over the tournament. Goalies have that special bond. Goalies are different than the players, and we all had a really good relationship. We still keep in touch every once in a while and I am happy that I got to share that experience with those other two guys.

JHM: What was the reaction like from friends and family when you got back home on Canadian soil from the World Juniors?

ND: It was really nice to be home and to be able to share that with all my friends and family. It really feels real when you come home where all your friends and family are there waiting for you. It made that moment so much more special.

JHM: What was the adjustment like playing on a bigger ice surface?

ND: It was definitely a little bit different, especially as a goalie there are different reads you have to make and you have a lot more time when the shots are coming. It took probably a week, a week-and-a-half to get used to it completely, but by the end, you just kind of get used to it. It was definitely a learning curve and one of those things I wasn’t really thinking about going into camp and the tournament, and then when you finally make the team you have to really focus on that. It was different but it wasn’t as bad as I thought it was going to be.

JHM: Another adjustment you made was the gear you were wearing. I understand you took five hours or so to design the red pads you wore. Take us through the process – what was that like for you?

ND: I’m just a big gear nerd. I love when my pads look good. It’s one of my favourite parts about being a goalie. I got the customizer pretty early on and spent so much time, even when I was bored, just playing around with it with different colours and different ways to look at it. I love that kind of stuff like designing new pads so it was definitely a lot of fun for me.

JHM: How special was it for you to see your name as the top-rated North American goalie for the upcoming NHL Draft?

ND: It was definitely cool. It’s not something that I try to focus on too much in season. Obviously we’re more focused on winning here in Guelph. I think it was my Mom who noticed it before I did. She called me and was excited. I hadn’t seen it yet. It’s cool to get the recognition because it’s something I haven’t gotten a lot of in the past few years, obviously with getting overlooked in the draft last year, so to be a part of that would be really cool.

JHM: You went through quite a transformation in the offseason in losing 25 pounds. What were some of the keys for you to shed all of that weight?

ND: I think just getting into that pro mindset of eating healthy, doing the right things every day, and really taking care of your body. In past years, I have been an overweight kid. I definitely like to eat out, and that’s always been a problem of mine, snacking and things like that. I did a couple diets in the first few weeks after I got home, like the Keto diet. Then after that, it was more just meeting up with my nutritionist and really setting up a plan so I know what to eat every day and when to eat it, and not really going outside of that.

JHM: Did anything change mentally for you to have this unbelievable turnaround?

ND: Coming into the season, I knew I wanted to be a starting goalie. Where I was going to start, I wasn’t sure. Obviously we had (Anthony) Popovich coming back and (Owen) Bennett coming in as a young goalie, so I didn’t know if it was me going to be going somewhere or Popovich. I just wanted to set myself up so I was in a good position so I could be ready for the starting role. I didn’t want to be the backup again for my third year, as a 19-year-old, so I had to make a name for myself before it was too late. I definitely knew that going into the summer, so I really just wanted to dial it in and show people what I can do.

JHM: Given everything you have been through, from going undrafted last season then winning gold at the World Juniors to now potentially going in the first round this June, if I told you this one year ago that all of this was happening, what would you think?

ND: I wouldn’t believe you. It’s been such a roller coaster for the past six or seven months after winning the championship last year. Being a part of that team was really special to me, and then turning around this year and playing in the CIBC Canada Russia Series, and then being able to play in the World Juniors, and then the Kubota CHL/NHL Top Prospects Game, although I didn’t play (due to injury), just to be a part of all these things and get all of these opportunities to meet new guys and really see what it is like to be a highly touted player like that, it is a really good feeling and they are things I will never forget for the rest of my life.