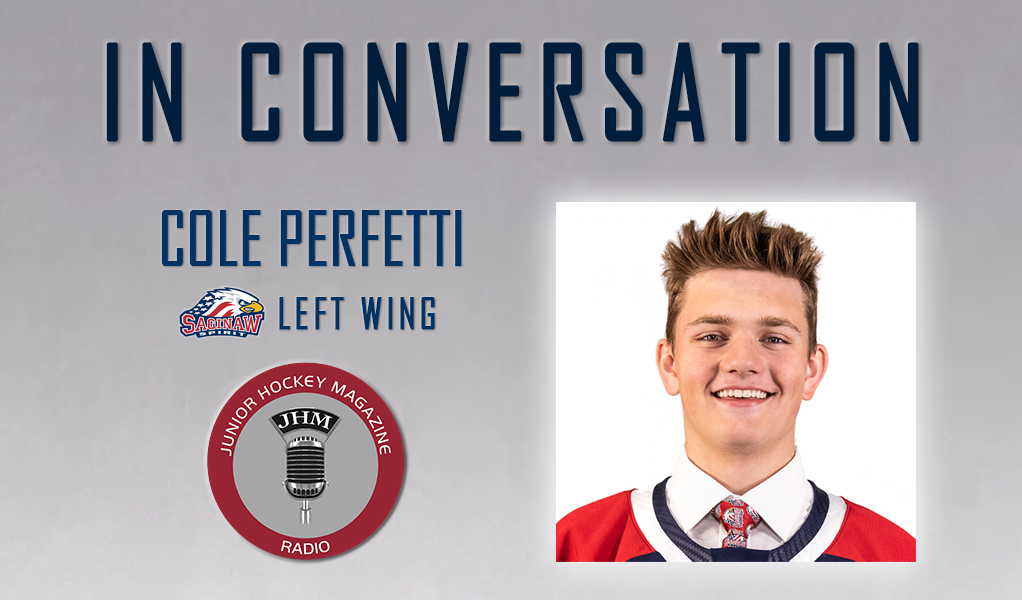 There is plenty of intrigue around Cole Perfetti as the 2020 NHL Draft nears.

After leading all OHL freshmen in goals and points last season, the second-year Saginaw Spirit forward has continued to build his draft day stock thanks to his jaw-dropping abilities with the puck. Clocking in at No. 4 among North American skaters in NHL Central Scouting’s midterm assessment, the Whitby, Ont., native is one of just six players across the circuit to crack the 100-point plateau this season, amassing 37 goals and 74 assists through 61 appearances.

Perfetti recently chatted with Junior Hockey Magazine about his play this season with the Spirit, his incredible showing on the international stage, as well as a charitable effort that is near and dear to his heart:

Junior Hockey Magazine: What’s life on the bus like because you guys spend a lot of hours travelling?

Cole Perfetti: It’s awesome being on the bus with the guys. It’s a lot of team bonding and a lot of spending time together, having good times, and making memories. The bus trips are some of the best times of being in hockey. It’s a lot of fun.

JHM: You recent set the Saginaw Spirit all-time single season points record and now have 111 points in your first 61 games this season. Talk to me about the way things have gone for you this year.

CP: It’s been good. At the beginning of the year, things were a little slow. The puck wasn’t going in and the points weren’t coming as much through the first 10 games but I just started to elevate my game, playing a little bit better and a little bit stronger, and things just started to go in my favour where the puck has started to go in. We’re on a great team here, one of the best in the CHL, so it definitely helps with the individual success. It’s been a great year so far and I am looking forward to more.

JHM: I heard someone was keeping track of the number of posts and crossbars you hit through your first seven games. Who was keeping count or was that you?

CP: That was me just in my head, hitting a lot of posts and I was a little frustrated. That was me keeping track. No one was doing it but me and my dad, and we were kind of laughing at it thinking about how many I could have had if those went in. It’s worked itself out now and it’s all good now so that is in the past and it’s funny to just look back on.

JHM: I understand you have been involved in some charity work at a hospital with Fett’s Friends. What’s all that about?

CP: It’s important to me just because I have always wanted to be involved with kids that are going through a tough time. I have been blessed with good health so far in my life and unfortunately it is not like that for other kids so I just want to make their lives a little bit better and put a smile on their face, give them something to look forward to, and keep their mind away from the hospital while they are there. It touches me and hits home and that’s the reason why I decided to do that.

JHM: You led all scorers with 12 points in five games with Team Canada and won a silver medal at the Hlinka Gretzky Cup before the season. What was that experience like for you there?

CP: It was unbelievable. Any time you can pull on the Canadian sweater and represent your country, it is a great honour and it is every kid’s dream to be able to do that. To go over there and experience my first best-on-best international play, it was an honour and something I will never forget. Obviously it was sobering losing to Russia, that was a tough loss, but I learned a lot from how to win on the international stage and how hard it can be. There are a lot of takeaways there. Individually, the tournament went pretty well. I was playing some of my best hockey and the puck was going in the net. Things were kind of going my way that week and I was really happy with the way I played. It was my first big tournament in my draft year so I was pretty pleased to make a name for myself and make a statement going into my draft year.

JHM: You developed the nickname ‘Goal Perfetti’ thanks in large part because you scored three shootout goals against Sweden in the semifinals at the Hlinka Gretzky Cup. What was that experience like for you and to be sent back out there and keep going?

CP: That was pretty cool. It kind of gave me feelings of Jonathan Toews on a smaller scale. Obviously his was the World Juniors but it kind of reminded me of that. I wanted to go for the first one, obviously I wanted to go all three, but I was egging on to go for the first one then they scored and I had to go again. I got a little nervous on the second one but ended up scoring and once I had the chance to win it I just looked at the coach and he just nodded at me. I knew that I was going to go out and I was feeling pretty good with my shootout abilities and breakaways that day. It ended up going in, I kind of blacked out, but that was a moment I will never forget and probably one of the best moments I have experienced in my life, especially in hockey. It was definitely the coolest thing.