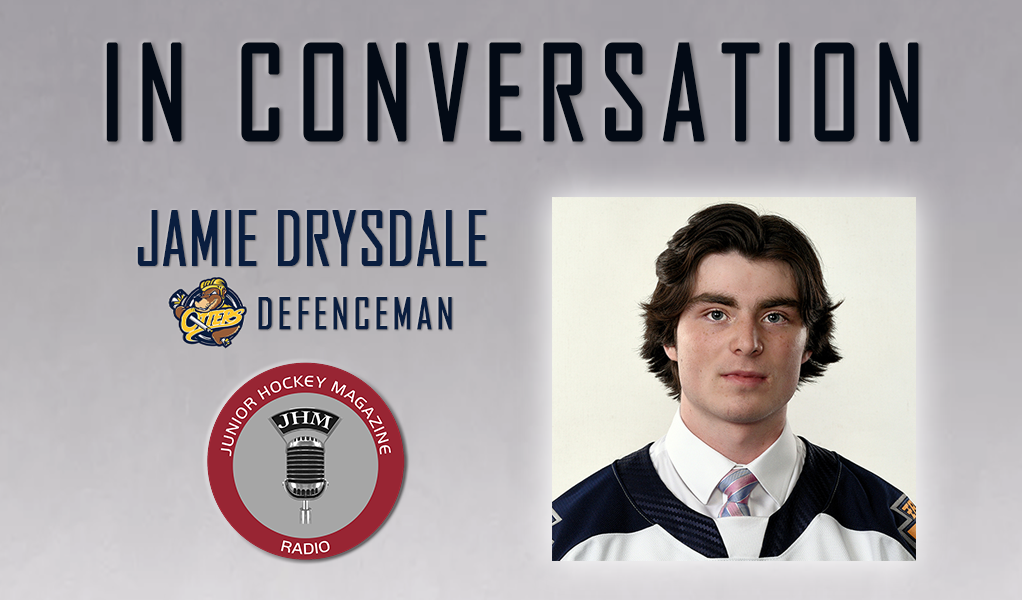 It’s a been a whirlwind year for Jamie Drysdale.

After captaining Team Canada at the 2019 Hlinka Gretzky Cup, the second-year Erie Otters blue-liner has played through a jam-packed season that has included showings at the 2019 CIBC Canada Russia Series and the 2020 Kubota CHL/NHL Top Prospects Game, topped off with a gold-medal finish with the Great White North at the 2020 IIHF World Junior Hockey Championship.

An effortless skater, Drysdale is a modern-day defenceman with a keen ability to generate offense from the back end, always a valuable commodity to NHL franchises. After leading all OHL freshmen rearguards with 40 points a year ago, Drysdale has raised his game to another level in 2019-20 as through 38 appearances he is scoring above a point-per-game pace with seven goals and 32 assists on the season, a performance which has helped him earn the third-overall spot and first among defencemen in NHL Central Scouting’s Midterm Rankings.

Drysdale recently sat down with Junior Hockey Magazine to discuss the upcoming 2020 NHL Draft, his play at the World Juniors, as well as the key element of his game that makes him stand out from the pack:

Junior Hockey Magazine: How does it sound to be introduced as the top-ranked North American blue-liner going into the draft?

Jamie Drysdale: I think it’s pretty cool. To be recognized like that is something that I have worked toward and something that I wanted growing up. In saying that, there is still a lot of work to be done, a lot of games to be played, and anything can happen, so I’m just trying to keep doing what I’m doing come draft day.

JHM: When you got home (from the World Juniors), what was the reaction you got from your family and friends when you had that gold medal draped around your neck?

JD: It was almost a shock in a sense that ‘Holy cow, it’s real’. As a 17-year-old, it’s not something that a lot of people get to go through, so I was really appreciative of that. It was just a really exciting time.

JHM: You also had a special moment against the Finns when you scored your goal. Walk us through that experience.

JD: I just got the puck at the blue line, got my head up, there were a lot of bodies in front of the net so I figured the goalie wouldn’t be able to see much, so I just tried to get across the ice as quick as I could. I got my head up and I saw a spot and I was lucky enough for that puck to go in. It was an unbelievable feeling.

JHM: You’re just the seventh 17-year-old defenceman to play for Team Canada, with guys ahead of you like Aaron Ekblad, Ryan Ellis, Jay Bouwmeester, Chris Phillips, Wade Redden, and Scott Niedermayer. What’s it feel like to have your name thrown out amongst those kinds of guys who went on to have the kinds of careers they did in the NHL?

JD: That’s pretty surreal just to have my name in that category. In saying that, there is still a long road ahead and a lot of work to be done, so I’m just going to put my head down and get to it.

JHM: You started as the seventh defenceman (at the World Juniors) and got more ice time as the tournament went on. What changed for you during the tournament?

JD: I think a lot of it is confidence. Going in, my mindset was just to not mess up, and as the tournament went on, the coaches and the other players were giving me the confidence to do what I do. I think they trusted me to go out there and do my thing, and that trust allowed me to have more confidence in my game.

JHM: When you start to look ahead to the draft, how difficult is it for you to focus on what you are doing right not versus everything that comes with the projections of where you are going to go in the draft?

JD: I think it’s definitely something that is in your mind, but in saying that, there is still a long way to go, a lot of games to be played. At the end of the day, you can only do what you can do, so I am just going to try to develop and improve as I can come the draft, and whatever happens, happens. Everyone is looking forward to their draft year and it should be really exciting.

JHM: Who keeps you grounded and helps you focus along the way?

JD: I think there are a lot of people. Obviously first and foremost, my parents are really supportive of me. They are not the type to put any pressure on me. I think they are all encouragement and about having fun with it and enjoying the experience. That helps me a lot, as well as just my teammates here in Erie and my coaching, it is a good environment that I am in right now and a mindset where we are all on the same page, so it’s just about taking it step by step and trying to develop everything that I can.

JHM: You tested as one of the best skaters ahead of the Kubota CHL/NHL Top Prospects Game. Talk to me about your skating ability, where you are at with that, and where you want to be ultimately.

JD: I think skating has been one of my strong suits for the majority of my hockey career up until now. It’s something that I like to use to my advantage and I’d like to continue that. I work with a skating coach all the time in the summer. I think it’s something that is a strength of mine but I want to continue to be like that, so anything I can do to put me over the edge or keep me ahead of the game a little, that’s what I am trying to do.

JHM: You weren’t always a defenceman. You spent a lot of your minor-hockey career playing up front as a forward. How did you end up making that switch?

JD: I wouldn’t say I played a lot at forward. I was a forward up until I was about nine or maybe 10 years old, where all the way up until minor midget I’d still play forward every now and then where in the middle of a game I’d still get a few shifts at centre. I think to have that opportunity was pretty cool and something that I really enjoyed and just had fun with.

JHM: You described the World Juniors experience as surreal. Is that a word you would use to describe this entire year with the Top Prospects Game, the World Juniors, and everything that is happening with Erie? What goes through your head when you think ‘Wow, this is all really happening’?

JD: I think if you were to tell me about the opportunities I have had and of where I am today, I don’t know if I would have believed you, especially for the World Juniors aspect of it. I wasn’t even thinking about getting an invite to the Canada Russia Series, and I think the ability that I had to play on the team and the opportunity, I am truly grateful for that.