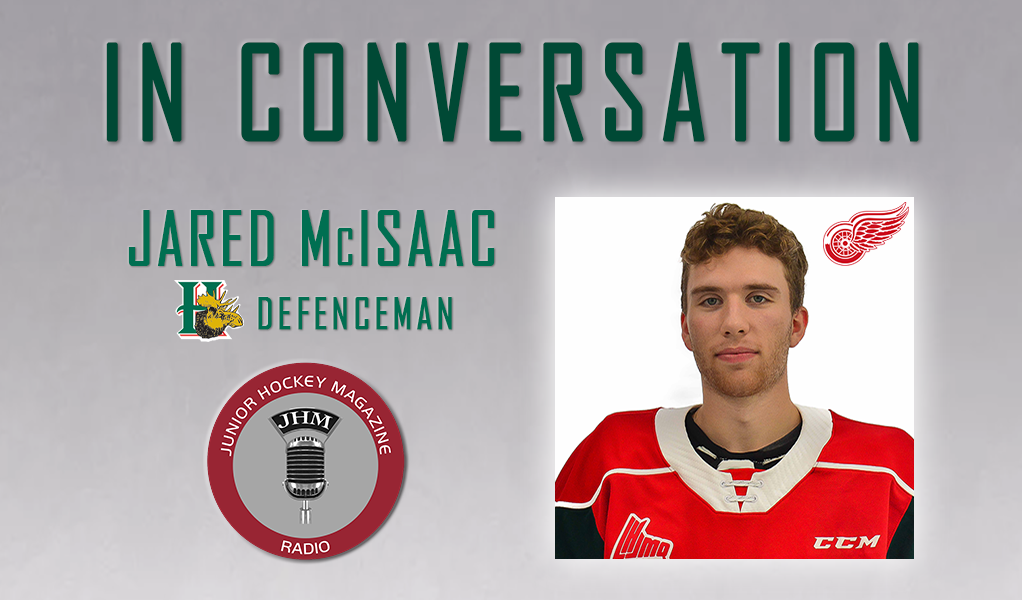 Jared McIsaac made his return to game action in the nick of time.

Following a run to last year’s Memorial Cup Final, the Halifax Mooseheads blue-liner and Detroit Red Wings prospect underwent offseason shoulder surgery that kept him sidelined until November 30 when he made his season debut against the Blainville-Boisbriand Armada. Getting in three games with the Mooseheads – a stretch which saw him record two assists – before shifting to the national stage with Team Canada, McIsaac is one of five returnees from last year’s squad that aims to finish in the winner’s circle after ending a disappointing sixth place a year ago.

McIsaac recently chatted with Junior Hockey Magazine about the opportunity to once again represent the Great White North, in addition to how he sees his role on the team and his motivation to help guide Canada to its 18th gold medal at the World Juniors:

Junior Hockey Magazine: What’s it like to be one of the returning players on Team Canada?

Jared McIsaac: It’s awesome. It was really fun last year in Victoria and Vancouver. You can definitely see the excitement in the guys in the dressing room and on the ice so it’s nice to get it started.

JHM: How have you felt since returning from shoulder surgery?

JM: My first game back was definitely a bit of a test, and then back-to-back Friday and Saturday against Cape Breton. They were pretty high speed games and I felt good in those. I think it’s going to take a little bit for me to get back to complete 100% game shape. It’s part of the process.

JHM: How motivating was the chance to play for Team Canada again?

JM: After surgery, we had the 30th of November marked down as the first game back that we thought would be a good point to hit. I wanted to make sure I would be ready for camp. This will be really good and I can’t wait to get started.

JHM: What did you learn from the veterans on last year’s team that you can apply this year?

JM: It’s a tough tournament to win. I watched the older guys play, guys like (Evan) Bouchard and (Markus) Phillips, how they played the game – simple on the back end. I think I take a lot away from that.

JHM: What’s your reaction to Joe Veleno being loaned to Team Canada?

JM: He’s a great player. He was a really good player last year at the World Juniors and now he is having a good year in Grand Rapids. I think everyone is excited to see him back.

JHM: As a returning player do you see yourself playing a leadership role?

JM: I think so. I think all of us have been captains or leaders with Hockey Canada throughout the years. I know Ty Smith and Joe (Veleno) have worn the ‘C’ here and there. I think we’re ready for that and if that is called upon us then we will take it in stride.

JHM: How much does last year’s result motivate you this year?

JM: Any time you wear the Canada jersey and end up coming up short, it’s tough. It definitely took a little while to swallow that one. I think Hockey Canada is definitely motivated to put that to rest in this tournament. We’re going to have a good group of players, a good team, and we’re all looking forward to it.