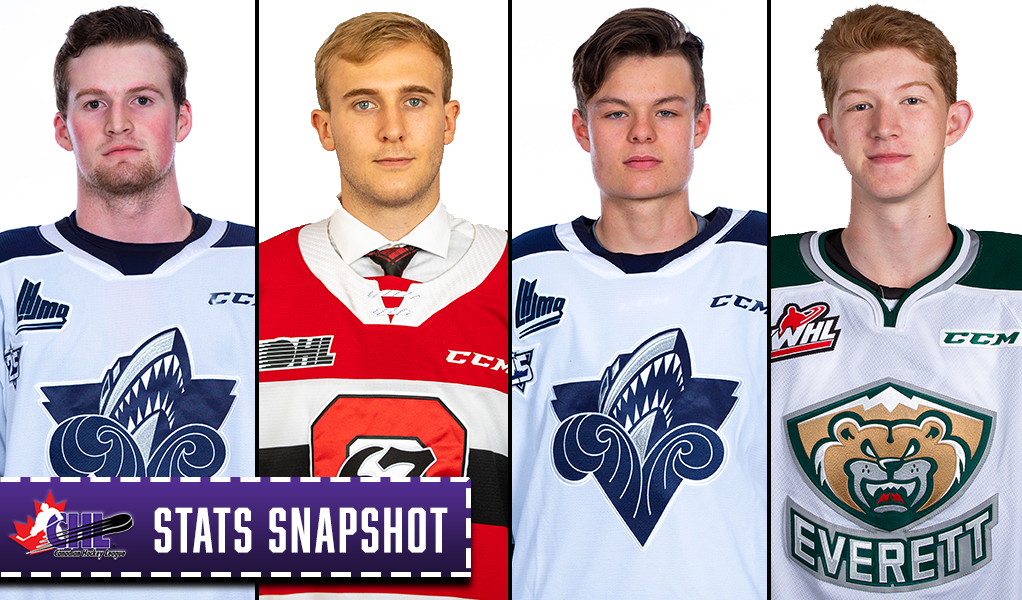 As the Canadian Hockey League season reaches the holiday break, four different players from across the circuit decorate the top of the leaderboard:

The best offensive showing as the season reaches the holiday shutdown belongs to Rimouski Oceanic captain and 2020 NHL Draft favourite Alexis Lafreniere who has recorded a CHL-best 70 points counting 23 goals and 47 assists in 32 outings.

In all, Lafreniere holds an eight-point lead on the next highest scorer in the circuit with that label belonging to Hamilton Bulldogs forward and Los Angeles Kings prospect Arthur Kaliyev who stands at 31 goals and 31 assists for 62 points across 33 appearances. That total is evened by the QMJHL’s next highest scorer in Lafreniere’s linemate Cedric Pare who has collected 31 goals and 31 assists in 34 games, while top scorer recognition from the WHL belongs to Spokane Chiefs forward and Minnesota Wild draft pick Adam Beckman who has registered 52 points counting 23 goals and 29 assists in 32 games. 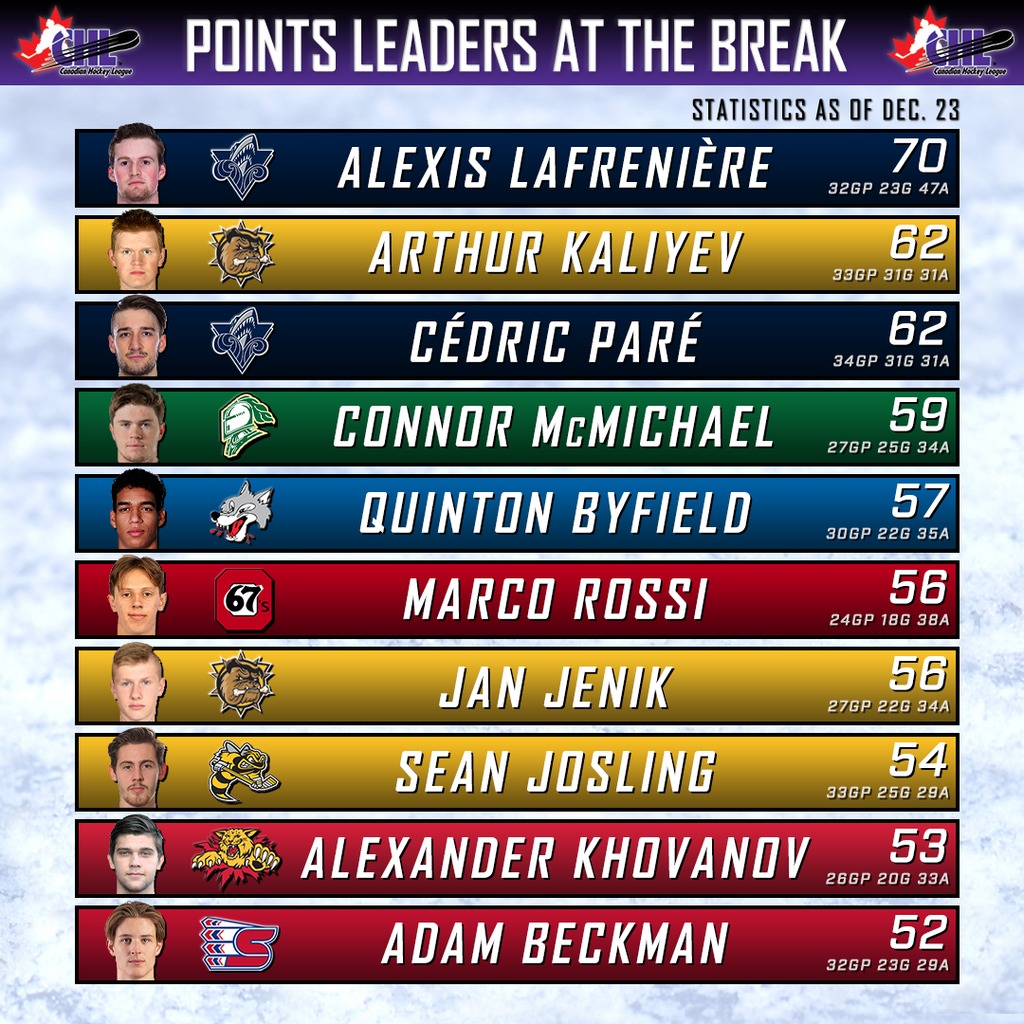 Hoefenmayer brings it from the back end

No defenceman has tallied up the points more this season than Ottawa 67’s blue-liner Noel Hoefenmayer who tops the charts with 44 points on the season counting 14 goals and 30 assists through 30 contests.

That total is good for a four-point margin on the next highest defensive scorer in Peterborough Petes rearguard and Winnipeg Jets prospect Declan Chisholm who comes in at 40 points counting seven goals and 33 assists through 32 appearances. Meanwhile, the top scoring defenceman from the QMJHL is Oceanic first-year blue-liner Isaac Belliveau who has notched seven goals and 32 assists for 39 points in 32 games, while the same distinction from the WHL is held by Lethbridge Hurricanes defender Alex Cotton who has amassed 37 points counting 10 goals and 27 assists in 35 outings. 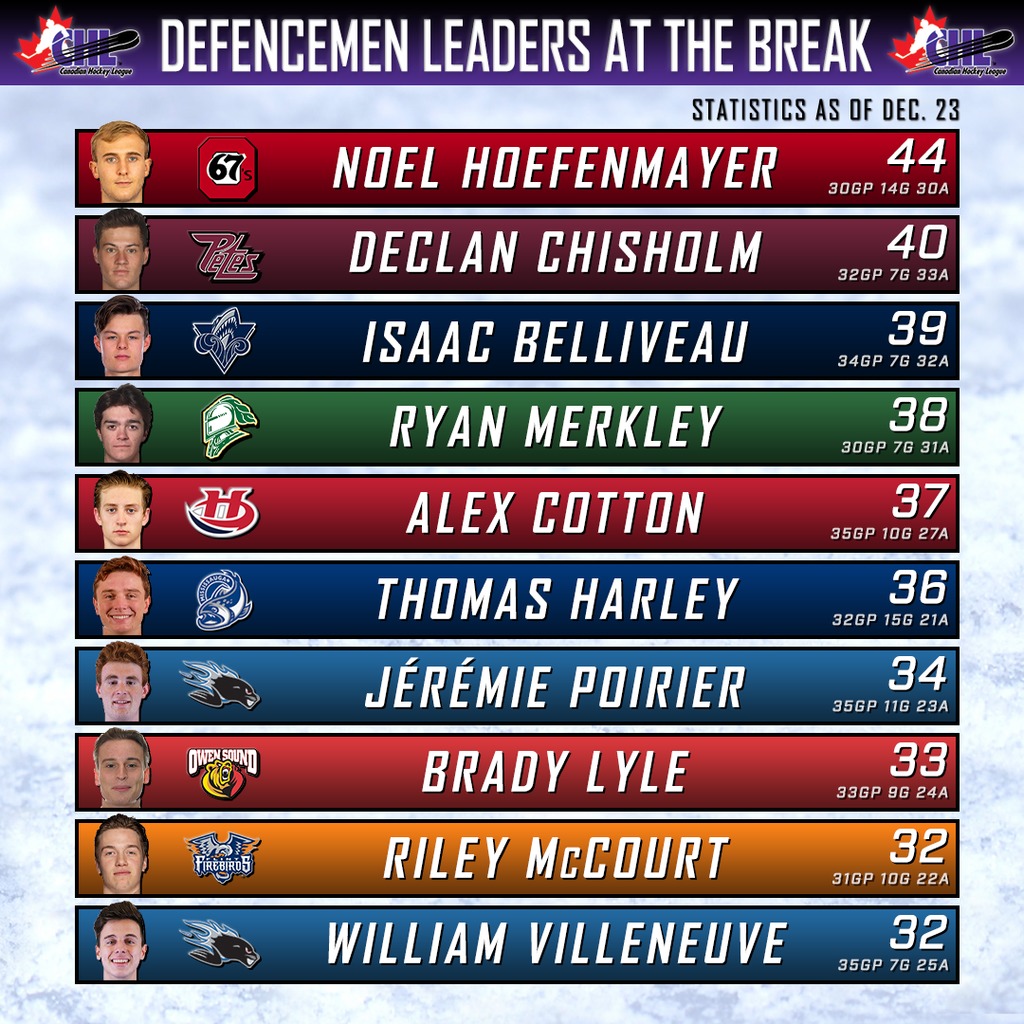 Not only is Belliveau the top scoring defenseman from the QMJHL but his 39 points also lead all rookies across the CHL.

Belliveau also has a four-point cushion on the next highest scoring fresh face in Medicine Hat Tigers first-year forward Cole Sillinger whose 35 points count 12 goals and 23 assists through 28 appearances. Back in the QMJHL, Belliveau also stands eight points north of Moncton Wildcats forward Zachary L’Heureux who through 25 games has totaled 12 goals and 19 assists for 31 points, while top scoring rookie distinction in the OHL belongs to Kingston Frontenacs exceptional forward Shane Wright who has collected 16 goals and 13 assists for 29 points in 28 games. 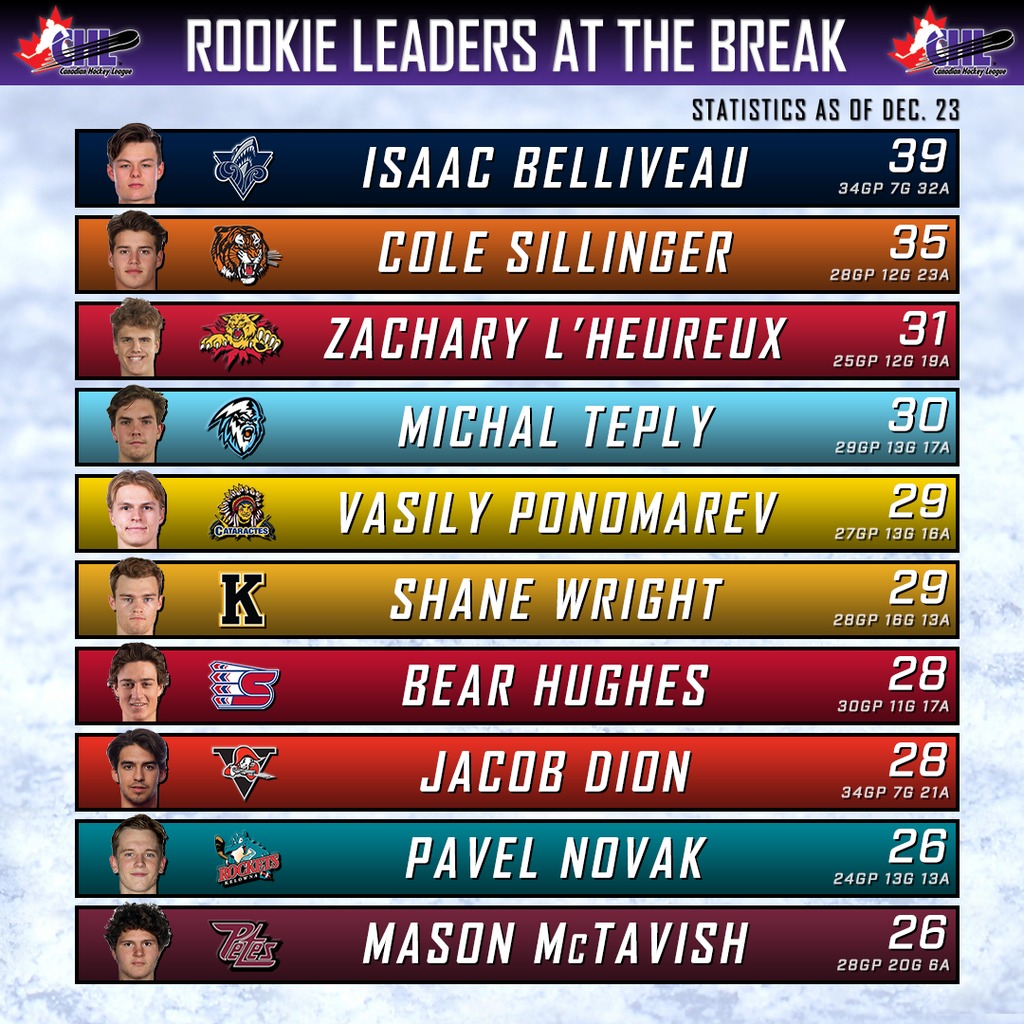 Wolf dominant between the pipes

No netminder has put up a better showing through a minimum of 12 appearances this season than Everett Silvertips goaltender and Calgary Flames prospect Dustin Wolf as he leads the entire CHL with an incredible .941 save percentage across 24 games.

Wolf has the edge over Guelph Storm third-year netminder Nico Daws who holds down a .939 save rate across 20 showings this season, while the next best performance is another WHL talent in St. Louis Blues prospect Joel Hofer of the Portland Winterhawks who has built up a .937 save percentage through 27 games. In the QMJHL, leading all netminders is Samuel Hlavaj of the Sherbrooke Phoenix who has shined with a .925 save rate through 22 appearances. 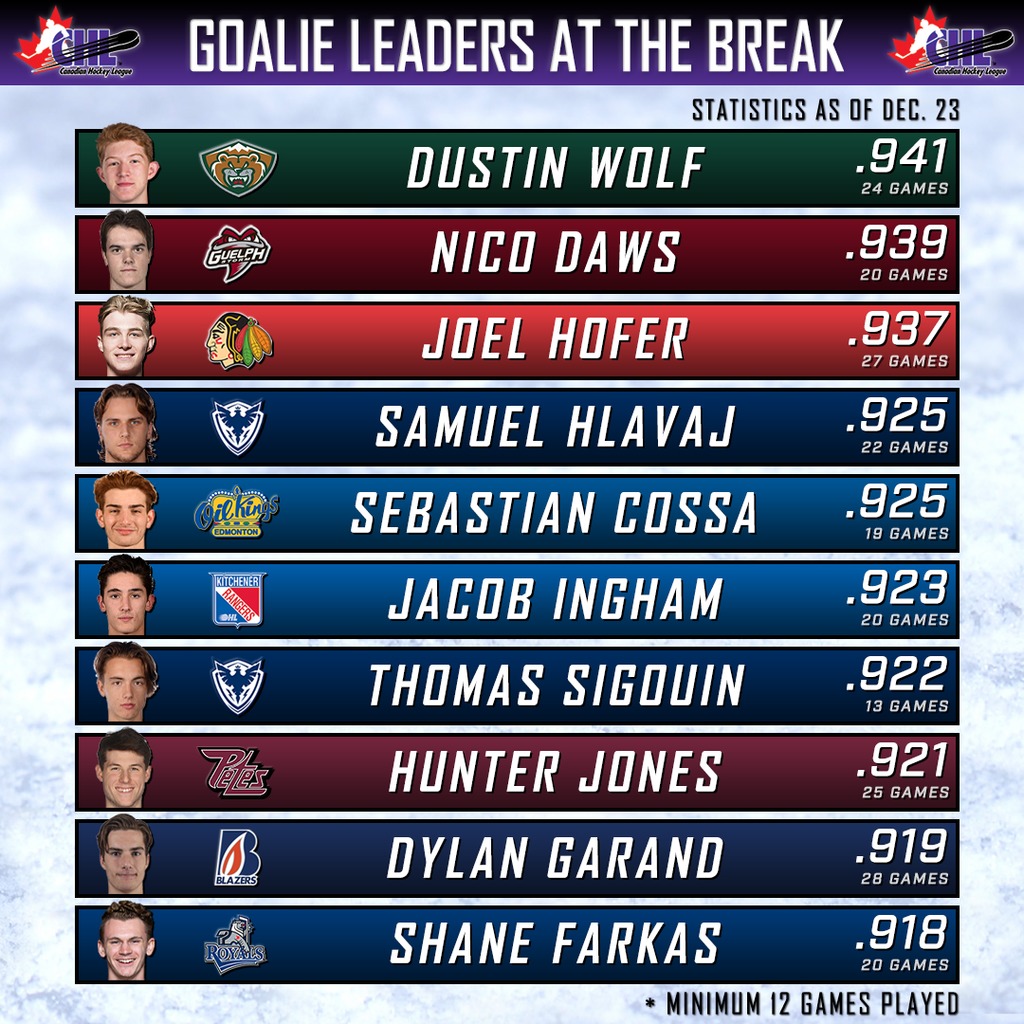 On the team end, no squad has scored more often this season than the OHL’s Sarnia Sting as the club has racked up 152 goals in 33 games, good for just over 4.6 goals per game.

The Sting hold a slight edge on the next best OHL squad in the Soo Greyhounds who have matched Sarnia’s 152-goal total but doing so in 35 outings to average about 4.34 goals a night. In the QMJHL, the top scoring squad is the first-place Sherbrooke Phoenix with 146 goals in 34 games, good for about 4.29 goals each game. In the WHL, the Tigers lead the way with 142 markers on the season, doing so in 33 games to average 4.3 goals per game. 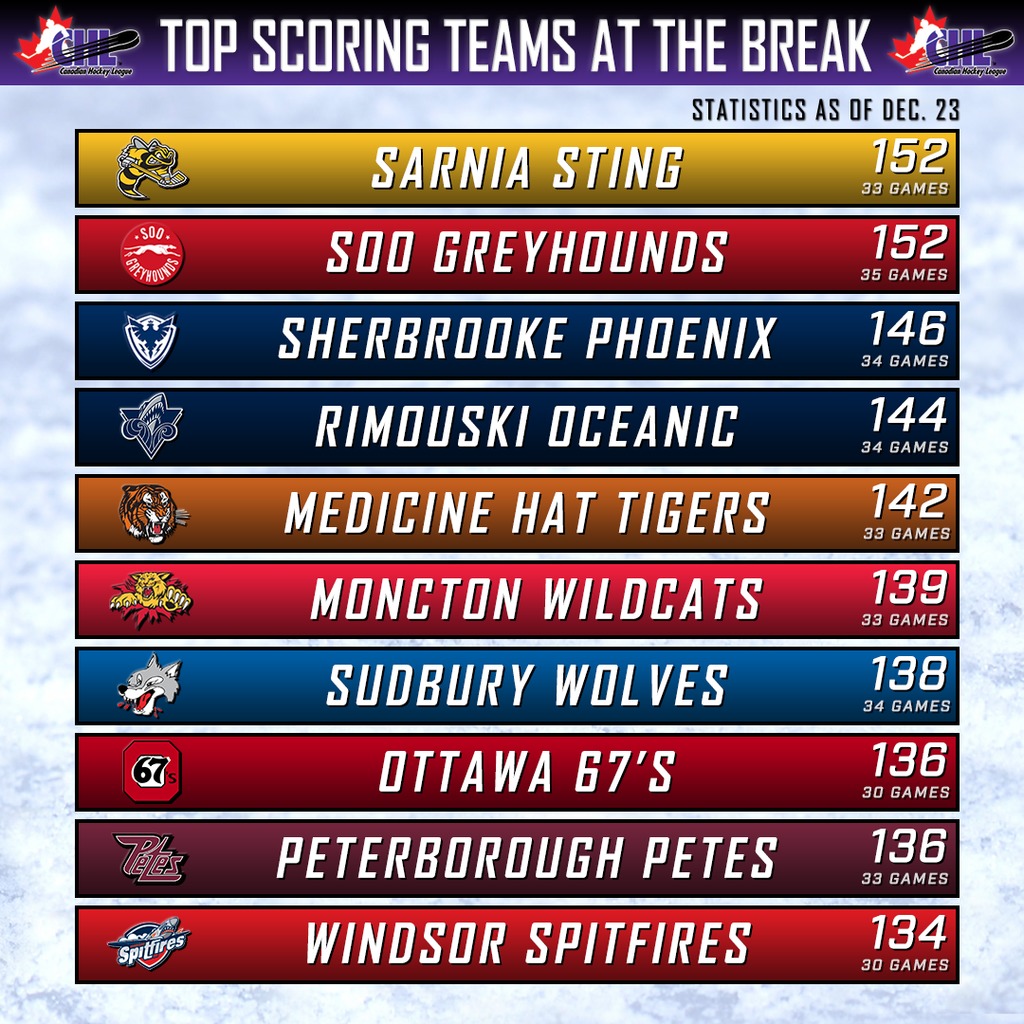