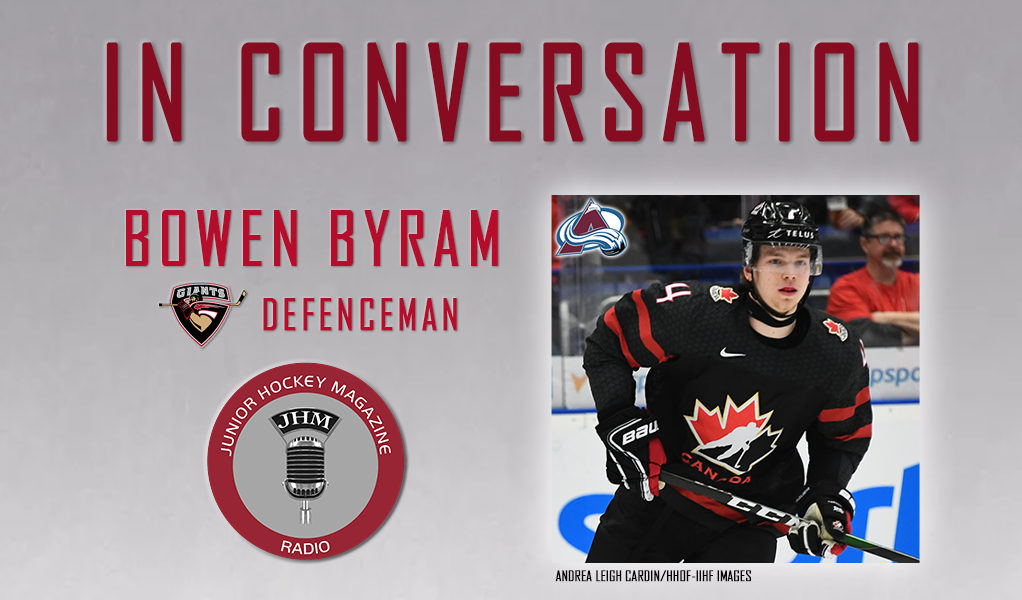 What separates the truly great players is a keen ability to raise their game in the moments that matter most.

There is no denying that Colorado Avalanche first-round pick Bowen Byram of the Vancouver Giants has that characteristic. That much was evident during last year’s postseason when the budding blue-liner guided the Giants to the deciding game of the Ed Chynoweth Cup Final thanks to his chart-topping playoff performance in which he amassed 26 points counting eight goals and 18 assists through 22 appearances.

That sort of dominant play and the high-level skill to take control of a game will undoubtedly be an invaluable tool as Byram suits up for Team Canada at the 2020 IIHF World Junior Hockey Championship in what marks his latest chance to represent Hockey Canada’s Program of Excellence.

Through the early stages of tournament action, Byram shared his thoughts with Junior Hockey Magazine about this year’s Canadian rendition, the opportunity to once again play under the national spotlight, and what it means to compete in the World Juniors after years of taking in the annual favourite:

Junior Hockey Magazine: Give me a sense of what Canada looks like this year and the overall character of this team.

Bowen Byram: I think we have a big team but we also have a lot of skill and speed so we just have to combine those and find the best way to figure out how to win a gold medal here.

JHM: You have been skating a lot right now with Calen Addison of the Lethbridge Hurricanes who you play against in the WHL. What’s it like to play with a guy like this and his style of game and how it works with you?

BB: He is a super smart player. Playing with him is really easy. He always seems to get me the puck when I am at full speed. The transition has been pretty easy and I have played against Calen a lot so I know what kind of player he is. I do my best to contribute to his attributes.

JHM: You have a couple of returnees on the back end with Jared McIsaac and Ty Smith. How much of a leadership role have those two taken?

JHM: You won a gold medal at the 2018 Hlinka Gretzky Cup where you also played with a number of players on this World Junior team. How much did that experience help you with developing chemistry a lot more quickly this time around?

JHM: One of your teammates is Alexis Lafreniere who is the projected first-overall pick in the NHL Draft in June. How impressed are you as a defenceman who regularly has to face him now in practice? What are your thoughts of watching him play?

BB: He is super good. I was on the same team as him at the U17, the Hlinka, and then the U18, so I have seen him play quite a bit. It’s pretty impressive what he can do with the puck. He’s also good away from the puck. He is good defensively. He is physical. It’s really fun to play with him but definitely not great when you have to go against him in practice.

JHM: Your World Junior coach Dale Hunter said you are a great skater but your hockey sense is a big part of it. You move the puck, you work the net, make the right plays, power play, you are very deceptive. What’s it like to hear Coach Hunter say those kinds of things about you?

BB: It’s pretty cool. He is a guy who played in the NHL for a long time and has been around the game forever, so to have him say those things is pretty cool but I definitely have to prove myself at the next stage which is the World Juniors. I am really excited to work with him throughout the tournament. We have one goal in mind so hopefully we can bring home the gold.

JHM: The Colorado Avalanche drafted you fourth overall last June. They have gotten off to an unbelievable start as one of the best teams in the Western Conference. What has your experience with them been like so far and how closely are they in contact with you?

BB: We’re pretty much in contact once a week or so. I talk to the skating coach and the head of development quite a bit. They have been very active which is good. I like hearing feedback and what they think. Like you said, they have had a great start and it’s exciting seeing them doing well.

JHM: What was the tradition like in your house watching the World Juniors as a kid and what does it mean to now have the chance to play in it?

BB: It’s pretty crazy. I remember a lot of big moments from the World Juniors, watching from the couch with my family. To be on the TV now is going to be pretty crazy, and also to have my family with me, it’s going to be very special. It’s a long road to go yet but we’re excited and ready for the first game.