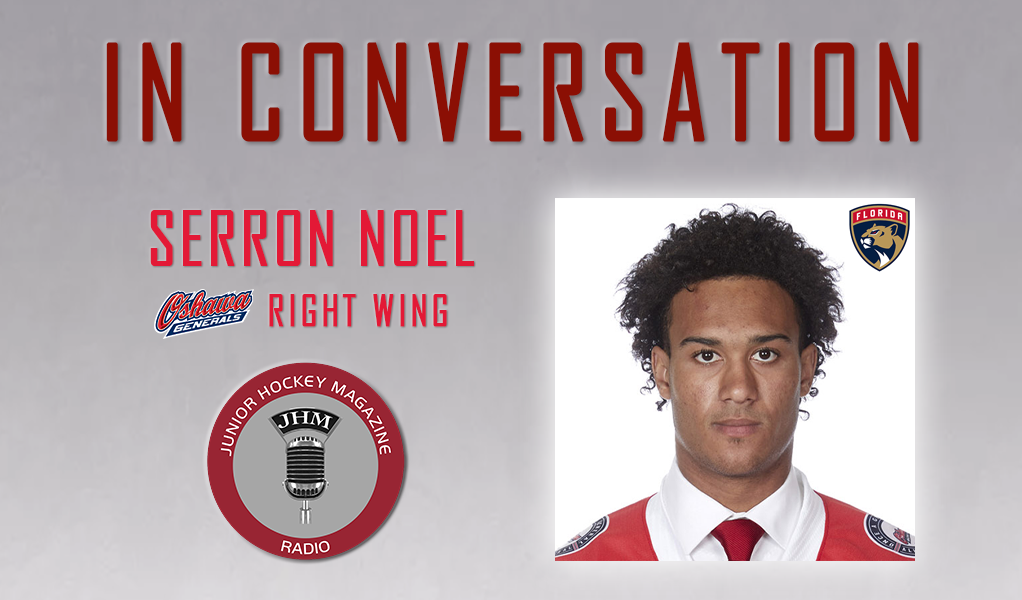 Serron Noel offers it all.

From size on the wing to tantalizing puck skills, the Oshawa Generals forward brings a unique combination that is difficult to find in the hockey rink nowadays. The Florida Panthers prospect, who will make a bid to compete with Team Canada at the World Juniors in the coming weeks, recently spoke with Junior Hockey Magazine about his recent experiences including the 2019 CIBC Canada Russia Series, NHL training camp, and his play with the Generals so far this season:

Junior Hockey Magazine: You had a goal and five shots on net in two games at the 2019 CIBC Canada Russia Series. How would you assess how you did in that series?

Serron Noel: I thought I did pretty good. I just wanted to go out there and show what I am capable of doing. I thought I played heavy, held on to pucks, and did a good job.

JHM: How do you feel you did at the event and have you had the opportunity to speak with Team Canada head coach Dale Hunter after the series?

SN: I thought I played pretty good. I obviously didn’t get off to the hottest start this season, but I think I definitely showcased well in these two games, and that I played that style that Dale is looking for and that Team Canada wants me to play. I didn’t actually get to talk to (Hockey Canada) after the game but I feel that I played well and showcased well.

JHM: Give us a sense of your style of game. Are you a 6-foot-6 guy who likes to play big and as a rugged power forward, or do you happen to be 6-foot-6 and still a speedy, skill-type guy?

JHM: I’ve got to ask you about your dad, Dean, who was a running back for five seasons in the CFL with Ottawa and Hamilton. At what point did you get to the point where maybe he thought you were going to play football because you’re a big guy, but then you decided to play hockey – what was the conversation like with your dad?

SN: He never really forced me to play football at all. It was never really something that I was interested in. When I grew up there were always a bunch of kids out on the street playing hockey and one day I just decided to join them and had a lot of fun, and was like, ‘Dad, please sign me up for hockey,’ and it just took off from there. From the beginning, it was pretty much hockey just from all the exposure I got to it at a young age.

JHM: You got into some preseason action with the Florida Panthers back in September. What was that experience like for you?

SN: It was unbelievable. I was lucky enough to get two games in against Nashville and Montreal. It was just a great experience. I actually got to spend a couple of days at Keith Yandle’s house. I was lucky enough he let me in. I got to go out to dinners and breakfasts with some of the guys. It was just an unbelievable experience the whole time there. I had a lot of fun and definitely learned a lot too, so it was great.

JHM: What does that experience do as far as inspiring you and driving you to make that a full-time gig and not just something in the preseason?

SN: I remember when I played in Montreal, just seeing the atmosphere there, I was like, ‘Wow, this is what I want to do for sure’. It definitely gives you an extra drive to work harder in the offseason in the gym, putting away having fun with friends and going out during the summer and just focusing on what you need to do to get better and giving yourself the best shot of being an NHL player.

JHM: You missed the first five games of the season with a suspension. Tell us what you learned from that experience moving forward.

SN: Like you said, as a bigger guy sometimes you are noticed a lot more on the ice by the referees, so it’s something when you’re making checks that you’re making sure you have your hands down and that you’re putting your shoulder into him because sometimes you’ll get called for a head check when it’s just you being a lot taller than the other person. It’s something I have kind of picked up over my years of playing in the OHL in that being a bigger guy you can’t always run around with your hands up because you’re going to get called for a penalty.