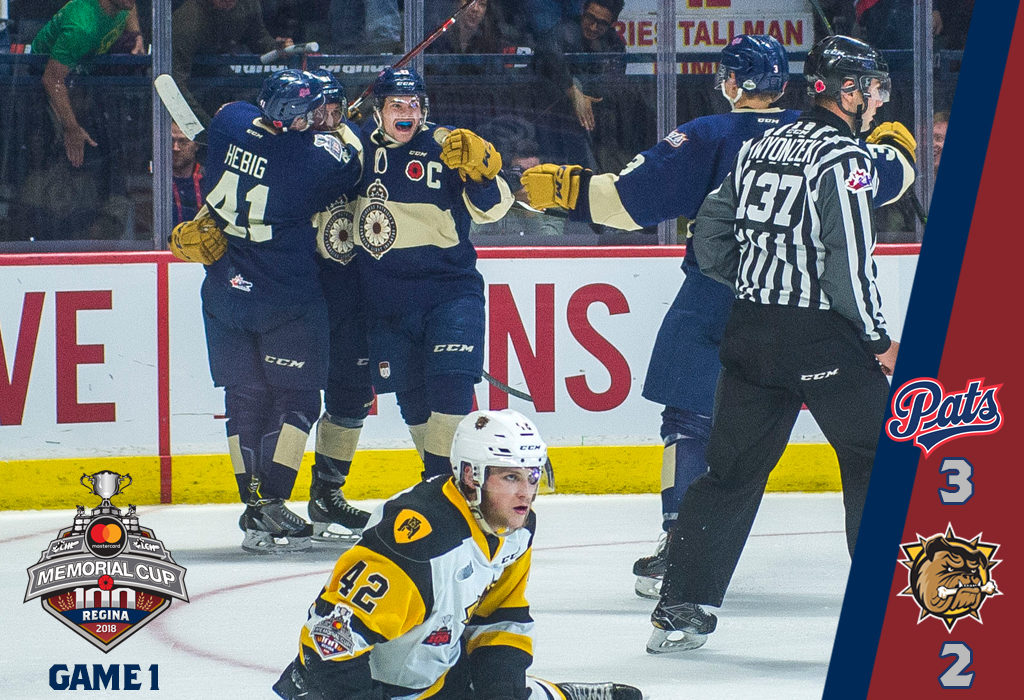 Colorado Avalanche prospect Nick Henry finished off a rebound in the slot with 33 seconds left on the clock to lift the Regina Pats to a thrilling 3-2 to victory on opening night at the 2018 Mastercard Memorial Cup.

Henry’s go-ahead goal brought the 5,678 at the Brandt Centre out of their seats as the Pats kicked-off the centennial celebration of the annual national championship with a hard-earned victory.

Rookie netminder Max Paddock was a difference-maker, turning aside 31 shots on the night to earn the praise of his coach.

A last minute game winner from @nhenry19 gives the host @WHLPats a 3-2 victory to launch the 100th #MCMemorialCup on home ice! #MMC100

“Considering the stage and the importance of the game, he was obviously very good,” said John Paddock, who is also the young goaltender’s uncle. “It’s a strength of his, besides being a really good athlete is his poise and that demeanor. I think that rubs off on the rest of the team. This was certainly his biggest stage yet.”

Among the young Paddock’s finest moments included a point-blank second period denial of Hamilton’s Brandon Saigeon coming down the middle as well as a third period save off Bulldogs rookie Arthur Kaliyev to keep the score knotted at two.

The Pats battled hard from start to finish, taking away shooting lanes, blocking shots and winning the 50/50 battles to gain the edge on the scoreboard.

“We tried to take a page from the team just west of us here as far as blocking shots,” said head coach Paddock, referring to the WHL champion Swift Current Broncos. “We got our sticks in lanes and Brady Pouteau came up with a big block in the last minute there.

“Our guys played a desperate game out there tonight.”

After both clubs registered quality chances in the opening minutes, Hamilton struck first on a deflection from OHL Playoff MVP Robert Thomas. Blueliner Justin Lemcke collected a loose puck just inside the offensive blue line, sending a puck goalward before it was tipped enroute by the stick of Thomas at 7:49.

Trailing despite a strong first period, the Pats drew even in the opening minute of the second as captain Sam Steel wired a power play one-timer past Kaden Fulcher from the top of the right circle. Josh Mahura set Steel up with a perfect pass and the Anaheim Ducks prospect made no mistake, bringing the Brandt Centre crowd to its feet for the first time.

After Paddock provided a pair of quick lateral saves to keep the score tied, Hamilton regained the lead on a well-placed shot from Marian Studenic. The New Jersey Devils pick took a feed from defenceman Riley Stillman and waited out Paddock, going upstairs to put the Bulldogs ahead 2-1 at 13:14.

Regina responded just over two minutes later on a long wrister from Mahura. The swift-skating defenceman moved through the neutral zone, gaining the blue line to use a Hamilton defenceman as a screen to beat Fulcher past the glove at 15:30.

The Pats had three of the game’s first four power play opportunities but trailed on the shot clock 19-18 after two periods in a 2-2 game.

Both goaltenders were kept busy in the third as Regina’s Brady Pouteau was robbed in the early stages by the pad of Fulcher before Hamilton’s MacKenzie Entwistle struck iron midway through the frame.

Henry’s winner would come off an initial point shot from Libor Hajek, inspiring a rebound off the pad of Fulcher as Henry made no mistake on a quick release.

“We’ve been waiting for this moment for a long time and now that it’s here and we came up with a big victory it’s huge for us,” said first star Josh Mahura after the win. “It almost felt surreal to get back out there and see our hard work pay off.”

Hamilton outshot Regina 33-31, going 0-for-2 on the power play to Regina’s 1-for-4 mark. The Bulldogs entered action 10-1 when leading after one period in the 2018 OHL Playoffs, but that trend didn’t continue on Friday as the host Pats started their record 16th Mastercard Memorial Cup appearance on a winning note.