Murphy makes the difference as Titan top Broncos in OT 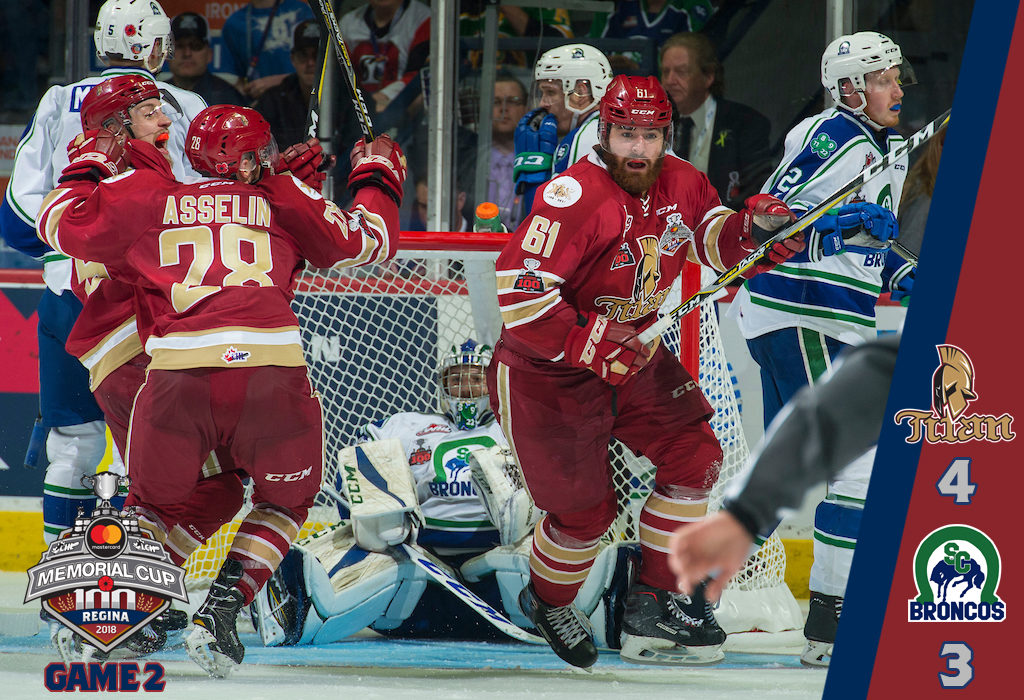 Liam Murphy muscled his way into the slot and made good on the doorstep, tapping a shot past the outstretched pad of Stuart Skinner 2:58 into the extra frame to give the Acadie-Bathurst Titan a 4-3 decision to open their Mastercard Memorial Cup schedule.

Acadie-Bathurst’s first-ever Mastercard Memorial Cup win saw the club come on strong late in the game, pushing past the WHL champion Broncos who had lost the services of injured star forward Tyler Steenbergen in the second period. The Titan triumph included a pair of shorthanded goals as they outshot Swift Current 39-27.

“It’s a huge win for us right at the start of the tournament and especially when we were trailing 3-2,” said Titan head coach Mario Pouliot. “Our two shorthanded goals made a huge difference for us. I was really happy with the way we competed and battled all game long and found a way to score the big goal in the overtime.”

Samuel Asselin opened the scoring 8:02 into the first period, silencing the many Broncos fans who made the 2.5-hour trek from Swift Current. After Jeffrey Truchon-Viel came in heavy on the forecheck, Asselin got the puck back to Olivier Galipeau on the blue line who sent a low release on goal where Asselin was waiting to tip the puck past Skinner.

The CHL’s top power play got to work and provided an immediate response less than four minutes later as Swift Current’s Steenbergen backhanded a bouncing puck past Evan Fitzpatrick through traffic at 12:18.

After Aleksi Heponiemi struck iron, overage veteran Giorgio Estephan gave the Broncos their first lead with 1:01 left on the first period clock. Estephan snuck in behind the Acadie-Bathurst defence entering the zone, getting open for a clean pass from Colby Sissons to one-time a hard shot past Fitzpatrick.

Bathurst wasn’t shy with shooting opportunities in the second, taking every opportunity to send pucks toward Skinner. Their persistence paid off with 1:53 left in the frame as Asselin picked up his second of the afternoon, racing in alone to fake out Skinner and beat him through the five-hole.

The Broncos weren’t about to head to the intermission down a goal though as Estephan struck again, taking advantage of a hard forecheck from linemate Tanner Nagel who created an opportunity in the slot. Estephan emerged on the backhand, following up on his own rebound to give his club a 3-2 edge after 40 minutes.

Fitzpatrick did his part early in the third, stopping Broncos leading scorer Glenn Gawdin on a breakaway with the ice still drying to keep his club within one.

Between timely saves from Fitzpatrick and a goal-post, the Broncos weren’t able to find any insurance and the Titan climbed back into the game.

Overage defenceman Adam Holwell tapped in a rebound as the trailer off the rush 5:51 into the third. Acadie-Bathurst’s second shorthanded goal of the game featured assists from German Rubtsov and Jeffrey Truchon-Viel as the Titan knotted the score at three.

With the momentum behind them, the Titan pressed hard late in the third but weren’t able to beat Skinner as the game spilled into overtime where Murphy was in the right spot at the right time to give his team the win.

“It was a back and forth game the whole game,” said the Killingworth, Connecticut native. “This event is a great opportunity and we’re all happy to be here so we just came out and gave everything we had.

“We played the game we wanted to play. Our PK was scoring and our team has been great with that all year.”

Skinner made 33 saves in the loss for Swift Current while Fitzpatrick was the victor, turning aside 24 shots on the afternoon.