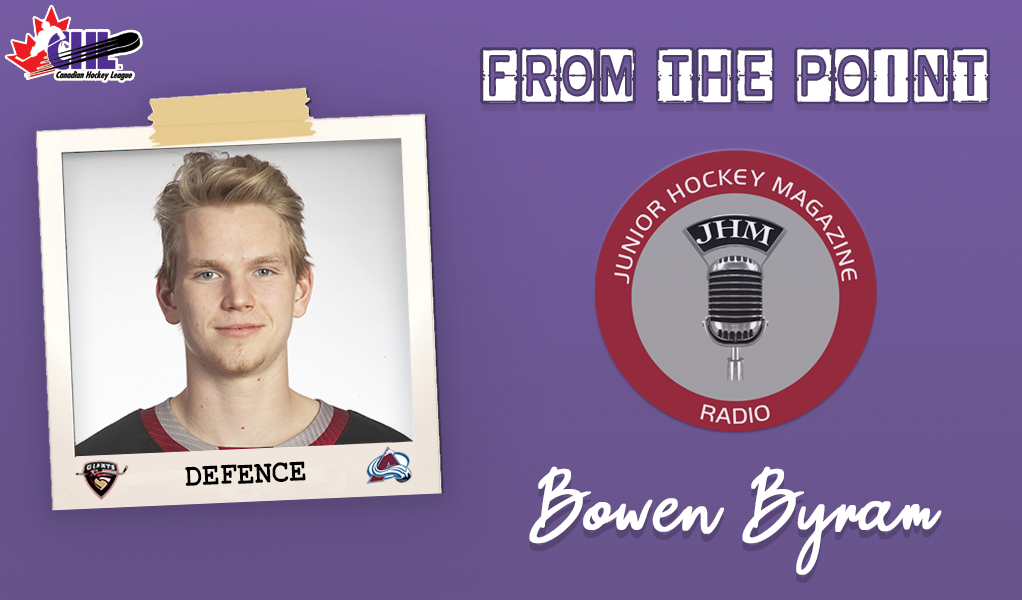 Colorado Avalanche first-round pick Bowen Byram of the Vancouver Giants sat down with Junior Hockey Magazine to reflect on life in the bubble during the Stanley Cup Playoffs, the chance to learn alongside superstars and CHL graduates like Nathan MacKinnon, as well as the opportunity to defend gold with Canada at the upcoming World Junior Championship:

Junior Hockey Magazine: What’s it like to be back on the ice?

Bowen Byram: I think the best part is just being able to play some hockey again. It has been so long since players have been in meaningful games. It’s been a long time and way longer than I think anyone would have liked but it is what it is. I think I have done a pretty good job of occupying my time for the time being and working on things that I need to work on. It’s been a long offseason so I am definitely ready to get out of the gym and back on to the ice.

JHM: How much have you spoken to Hockey Canada about what camp will look like?

BB: We have had a lot of Zoom calls, just kind of talking about what is going to go on. I am not totally sure what to expect in the first part in Red Deer. Hockey Canada has done a great job of making sure we are going to be probably the safest people in Canada from COVID-19. They have done a great job and I am really excited to get there and see all that they have for us.

JHM: How much contact have you had with the Avalanche?

BB: We have been talking a bit but it’s kind of hard to have a plan set so we’re just playing it by ear. I don’t think they are in too big of a rush to have me down there. I want to go win a gold medal and that is my No. 1 priority right now. Obviously I want to play in the NHL. That has been a dream of mine since I was so young, so whenever NHL camps start I think I will just head there after the World Juniors. That’s what my expectations would be.

JHM: What is your thought process in defending a gold medal?

BB: I think maybe there is a little bit of extra pressure but also excitement. It has been a year of firsts for everybody so maybe add that to the list of firsts with a back-to-back gold medal. It’d be pretty cool. I think we will definitely have the team to be able to do it. If you look at the selection camp roster, we have a really deep group so I am really excited to see how things turn out.

JHM: What was your bubble experience like with the Avalanche?

BB: It was very cool being in the NHL. My first taste of the NHL wasn’t quite what I expected it to be but it was still awesome just being around the guys. I learned so much on the ice and off the ice so I was very grateful to have that experience. The bubble can be tough and lonely but when you are with some of your close buddies it makes things a lot better. I think it is kind of what you make of it. If you go in there with a bad attitude, I don’t think you are going to have a great time, but if you go in there with a positive attitude and know that you are there for one thing and that is to win a gold medal then you can make the best of it and enjoy your time there.

BB: I was definitely pretty lucky to be able to be there and watch everything he does. He is an incredible player. Everybody knows that. He is also a really good guy. He treated me very well. It was kind of different because all of the guys were pretty dialed in. They knew what they were playing for and they wanted to win a Stanley Cup. There wasn’t too much interaction but (MacKinnon) is a very good guy. He made sure that I was taken care of when I needed to be taken care of. Just being able to see what he does, it is pretty crazy to see what he can do on the ice and to have a front row seat to that is definitely something that I won’t forget.

JHM: Walk us through last year’s experience in the gold-medal game when you were playing with the flu.

BB: As the game got going on, I definitely started to feel better. The day of the gold-medal game, I didn’t feel great and the night before in the semi-final game when the flu hit me, it wasn’t pretty. I just woke up from my pre-game nap the day of the semi-final game and I knew something wasn’t right. I got to the rink and it continued to get worse and I knew I wasn’t going to be able to play. It was nice that the team handled the Finns pretty handedly that night so the stress level was low in my room. It wasn’t very fun but I think it speaks to the character of the team we had. We had so many guys battle through things. A handful of guys had the same flu I had. Barrett Hayton played with pretty much a separated shoulder. Lafreniere’s knee wasn’t 100 percent. It was pretty cool to see everyone band together and we ended up coming out with a gold medal so it was pretty crazy and still hard to believe that that happened.