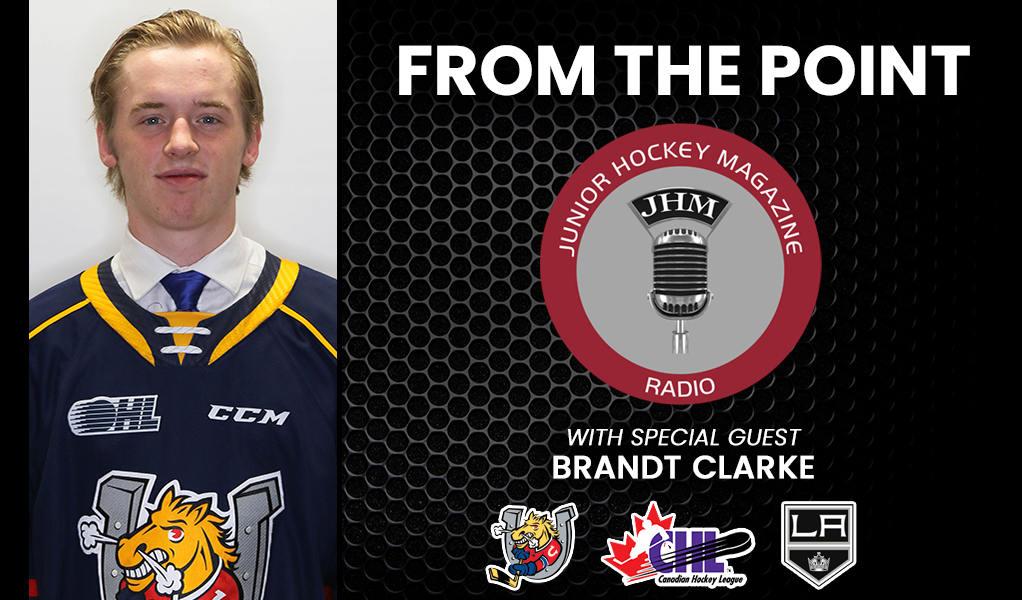 Barrie Colts defenceman Brandt Clarke joined Junior Hockey Magazine to discuss his impressive start to the 2021-22 season, his exciting future with the Los Angeles Kings, and the chance to represent Canada at the upcoming World Juniors:

Junior Hockey Magazine: Give us some insights on your strong start with the Barrie Colts?

Brandt Clarke: I feel like I have been playing my game. I have been producing and putting up numbers offensively. I have also been one of our go-to guys defensively. I am out there when we have to preserve a lead. I am really happy with how I have been playing. The offensive contributions are nice as well but the fact that the team is starting to rack up wins now is what is making me feel good.

JHM: What was it like to miss training camp as you battled through mono?

BC: It was really disappointing. I got out to Los Angeles for rookie camp, which was just going to transition into main camp. I did one practice but then I just had a really sore throat for a couple days. They wanted me to do bloodwork for mono and it came back positive. I was disappointed because I was excited to be out there and show what I can do with the pros and showcase myself for the team that drafted me. I was looking forward to being there but it just didn’t work out. They flew me back home and I couldn’t really do anything for a month. I then got thrown back into my season and, luckily for me, I feel that I adjusted really well. I don’t feel like it kept me down too much and I jumped right back into the mix with 20-22 minutes a night. I felt perfectly fine on the ice and I am really happy it didn’t knock me down too much. Now I am feeling really good, I am feeling 100 percent, and I feel like I am going every night. I feel really positive in how I have been playing.

JHM: What was your experience like at development camp with the Kings?

BC: It was remarkable. Every first NHL camp would be great for anybody but just the fact that the Kings have such a strong prospect core, it almost feels like you are playing NHL hockey out there because you have so many A-class prospects. It was really competitive and it was also lots of fun. That was a great time. I got to meet all the guys and they were all great to me. But it was just unfortunate that I couldn’t be alongside those guys at the end when the big camp came around.

BC: That is a cool feeling. The fact that people who know what they are talking about also think very highly of me is a great feeling. When that time comes when they ask me to accept that role, I will and to the best of my ability, and I feel I will manage to do that pretty well. It would be nice to learn that from a guy who has done that for years like Drew Doughty. Once I do finally arrive on the team, I definitely will be asking him a lot of questions and follow his game-day routine. I am really looking forward to being part of the Kings and seeing how my development goes from there.

JHM: What was it like to win gold with Team Canada at the U18s?

BC: It was amazing. That was one of the most fun experiences of my life. We had a lot of guys who hadn’t played for a long time and that got us nervous. We didn’t know how we were going to adjust and we didn’t know how they were going to play. Some of us got over to Europe to play but hadn’t played in a month-and-a-half so rust can develop there as well. We were kind of nervous but then that first game came and we beat Sweden 12-1. We weren’t too shaky after that. We felt pretty confident in ourselves and went from there. We were really happy to come home with the gold. We had a really strong team. For some of the guys, that was their only showing in front of NHL scouts that season but they still came and focused on the task and played their role and we came away on top. I was really fortunate to be a part of such a great group of not only players but guys off the ice as well.

JHM: How excited are you about the World Juniors?

BC: It’s pretty remarkable. The fact that it is just around the corner and that a lot of people are projecting me to be in the lineup with Team Canada, that is every kid’s dream so I am really looking forward to it.

JHM: What would it be like to be a part of the World Juniors?

BC: I can’t put it into words. I remember watching it as a kid and watching these players in the World Juniors. They were like superheroes, pulling out the big-time goals. I was actually at the Jordan Eberle game when he scored the goal in 2009. That kind of feeling was amazing just as a fan, so being on the ice with your teammates doing that, it would be a crazy feeling. I am really looking forward to it. It is a home crowd as well and that is definitely a special feeling. If I get the chance to be a key player on that team, I can’t wait. I am just going to do the best I possibly can for our team.

JHM: What is the Christmas tradition in the Clarke family when watching the World Juniors?

BC: It’s Christmas and then we have usually had some hockey tournaments around that time. We definitely squeezed in as many games of the World Juniors as we could, especially when Canada is playing. It is a holiday tradition for a lot of families, and not only hockey families. It is fun for a lot of Canadians to watch the World Juniors. If I can bring my family out to watch me play in it this year, that will be even better.