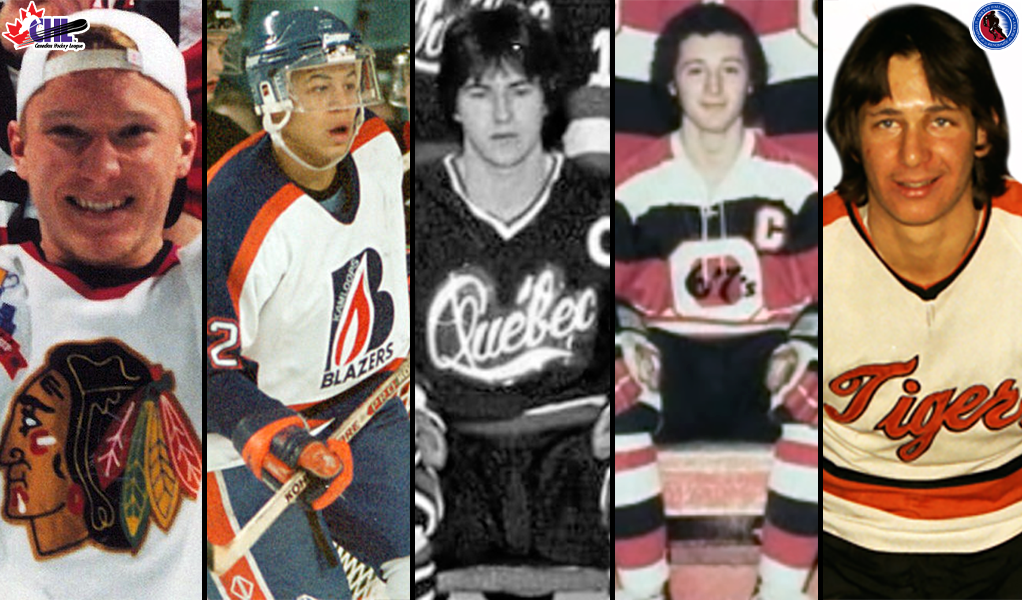 Five graduates of the Canadian Hockey League headline this year’s entry into the Hockey Hall of Fame.

Hossa, who spent the 1997-98 campaign with the Winter Hawks in which he finished third in team scoring with 85 points counting 45 goals and 40 assists across 53 contests, earned enshrinement on his first year of eligibility. Despite spending a lone season in the WHL, it was one decorated with accolades as Hossa helped Portland hoist the Memorial Cup for the second time in franchise history while earning a spot on the Memorial Cup All-Star Team after notching five goals and four assists for nine points in four games at the year-end tournament. Hossa’s season also included an Ed Chynoweth Cup championship after the Winterhawks eliminated the Brandon Wheat Kings in a four-game sweep, in addition to earning the Jim Piggott Trophy as the WHL Rookie of the Year after finishing second in scoring among freshmen including a rookie-leading 40 assists. Hossa also earned distinction as part of the CHL All-Rookie Team and CHL First All-Star Team.

The Slovak native then went on to a successful NHL career that counted 1,309 appearances with the Ottawa Senators, Atlanta Thrashers, Pittsburgh Penguins, Detroit Red Wings, and Chicago Blackhawks, counting three Stanley Cup championships with the Blackhawks in 2010, 2013, and 2015. In all, Hossa collected 525 goals and 609 assists for 1,134 points over his decorated career. Hossa was originally selected 12th overall by the Senators in the 1997 NHL Draft.

Alongside Hossa, Iginla also earned induction on his initial year of eligibility. The former WHL talent spent three seasons with the Blazers from 1993-96, counting back-to-back Memorial Cup championships in the latter two seasons and culminating with a phenomenal 136-point showing with 63 goals and 73 assists across 63 appearances in his final season to earn a spot on the CHL First All-Star Team in addition to the Four Broncos Trophy as the WHL Player of the Year. A two-time Ed Chynoweth Cup winner, Iginla also earned recognition as the Most Sportsmanlike Player at the 1995 Memorial Cup after he recorded four goals and two assists and was whistled for only seven penalty minutes through four contests. Over three seasons with the Blazers, Iginla registered 102 goals and 134 assists for 236 points in 183 games.

Selected 11th overall by the Dallas Stars in the 1995 NHL Draft, Iginla began his NHL career with the Calgary Flames in 1996-97, amassing 50 points in 82 games to earn a spot on the NHL All-Rookie Team. A natural leader, Iginla was named captain of the Flames at the start of the 2003-04 campaign, a distinction he wore up until a trade to the Pittsburgh Penguins in 2013. Iginla, who also later suited up with the Boston Bruins, Colorado Avalanche, and Los Angeles Kings, remains the Flames’ franchise record holder in several major categories, including games (1,219), goals (525), and points (1,095). During the 2001-02 campaign, Iginla had a breakout year offensively, finishing with 96 points including a career-high 52 goals in 82 games to earn the Art Ross Trophy as the NHL’s most prolific point producer in addition to the Maurice “Rocket” Richard Trophy as the top goal scorer. Iginla also earned recognition with the Lester B. Pearson Trophy (since renamed the Ted Lindsay Award) as the season’s most outstanding player as voted upon by members of the NHL Players’ Association. Iginla captured his second goal-scoring title two seasons later, wrapping up 2003-04 with 41 goals in 81 games, while also earning recognition with the King Clancy Memorial Trophy for his leadership on and off the ice. Internationally, Iginla found as much success, counting two Olympic Gold medal wins (2002, 2010), in addition to first-place finishes at the 2004 World Cup, 1997 World Championships, and 1996 World Juniors. Iginla wrapped up his career with 1,554 total appearances, the 14th-most in NHL history, in which he notched 625 goals (16th most) and 675 assists for 1,300 total points to rank 34th in all-time scoring. The Edmonton native returned to his junior roots in 2007 in becoming a part owner of the Blazers.

Spending three seasons with the Remparts from 1976-79, including the latter in which he served as captain and finished tied for the team lead in scoring with 86 points counting 26 goals and 60 assists across 68 appearances, Lowe was a two-time Second Team All-Star during his QMJHL career and was named to the Remparts All-Star Team as part of the 50th anniversary celebration of the QMJHL. Selected 21st overall by the Edmonton Oilers in the 1979 NHL Draft – the first NHL selection in franchise history – the former blue-liner began his 19-year NHL career with the Oilers in the 1979-80 campaign where he scored the first goal in franchise history in its first year upon joining the NHL from the World Hockey Association. With Edmonton, Lowe was a five-time Stanley Cup championship, hoisting the Holy Grail in 1984, 1985, 1987, 1988, and 1990 before winning his sixth title with the New York Rangers in 1994. In 1990, Lowe also claimed the King Clancy Memorial Trophy in recognition of his outstanding leadership abilities. He later captained the Oilers during the 1991-92 campaign. A native of Lachute, Que., Lowe was also successful with Canada on the international stage, counting a Canada Cup championship in 1984 in addition to a bronze medal win at the 1992 World Championships.

Joining the Oilers’ managerial ranks in 1998-99, Lowe first began as an assistant coach before later serving in various capacities including head coach, general manager, and president of hockey operations. He remains part of the managerial staff with the Oilers today as alternate governor and is also part of the Oil Kings business operations holding the position of Vice-Chair and Governor. Lowe also served as assistant executive director with Team Canada at the 2002 Winter Olympics in helping the Great White North capture the gold medal in hockey for the first time in 50 years. In all, Lowe’s playing career totaled 1,254 games, including a franchise-record 1,037 with Edmonton, and 432 points counting 84 goals and 348 assists. His 214 total playoff appearances rank 15th in NHL history. Lowe earned induction into the Hockey Hall of Fame in his 20th year of eligibility.

Wilson spent three seasons with the Ontario Hockey Association’s 67’s from 1974-77, including a phenomenal rookie campaign in which he finished with 87 points counting 29 goals and 58 assists across 55 appearances to rank fourth in team scoring. In his final season, Wilson earned a spot on the OMJHL First All-Star Team after recording 79 points in 43 games before adding another four goals and 20 assists for 24 points in 19 playoff appearances to help guide the 67’s to a six-game series victory versus the London Knights to hoist the J. Ross Robertson Cup. The former defenceman then added another 12 points counting two goals and 10 assists in five games at the 1977 Memorial Cup. His iconic No. 7 was retired by the 67’s in 1998.

Selected sixth overall by the Chicago Blackhawks in the 1977 NHL Draft, Wilson spent the next 14 seasons with the Blackhawks, culminating with the a James Norris Trophy win in 1981-82 as the NHL’s defenceman of the year after amassing 39 goals and 46 assists for 85 points in 76 games to earn a spot on the NHL First All-Star Team. Wilson then joined the San Jose Sharks in 1991-92, spending his final two seasons with the club while also serving as its first captain. The Ottawa native was also successful on the international stage, capturing the Canada Cup in 1984. In all, Wilson’s playing career totaled 1,024 appearances in which he collected 237 goals and 590 assists for 827 points, the 15th most by a defenceman in NHL history and first in Blackhawks’ franchise history among blue-liners. Joining the Sharks’ front office in 1997 as director of player personnel, Wilson was promoted to general manager 2003 and today is the NHL’s second-longest active serving general manager. Under his guidance, the Sharks have become a model NHL franchise, qualifying for the playoffs in 14 of 16 years including four consecutive division titles and advancement to the 2016 Stanley Cup Final. Wilson earned enshrinement into the Hall of Fame in his 25th year of eligibility.

In the builder category, Holland earned recognition for his off-ice achievements. Named general manager and president of hockey operations of the Oilers in 2019, Holland previously served in various front office capacities with the Detroit Red Wings from 1985 to 2019. After spending two seasons in the scouting department, Holland was promoted to director of amateur scouting in 1987 then became general manager in 1997. Under his guidance, the Red Wings hoisted the Stanley Cup three times (1998, 2002, 2008), in addition to a fourth title as assistant general manager in 1997. Holland’s success with the Red Wings also counted four Presidents’ Trophy wins, 10 division titles, and 13 seasons of 100-plus points, while also overseeing 25 consecutive playoff qualifications, the third-longest streak in NHL history. With the Red Wings and Oilers, Holland ranks fifth all-time in NHL history with 962 wins as general manager.

On the international stage, the Vernon, B.C., native served as assistant general manager in helping Canada capture gold at the 2010 and 2014 Winter Olympics in addition to the 2016 World Cup. A former goaltender, Holland spent two seasons with the Medicine Hat Tigers from 1974-76, putting together a combined 45-21-5 showing across 78 appearances. Drafted in the 12th round of the 1975 NHL Draft by the Toronto Maple Leafs, Holland later played four games in the NHL with the Hartford Whalers and Red Wings in addition to 343 appearances in the American Hockey League, earning AHL Second All-Star Team recognition in 1982.

The 2020 Induction Ceremony is currently scheduled for November 16 in Toronto.