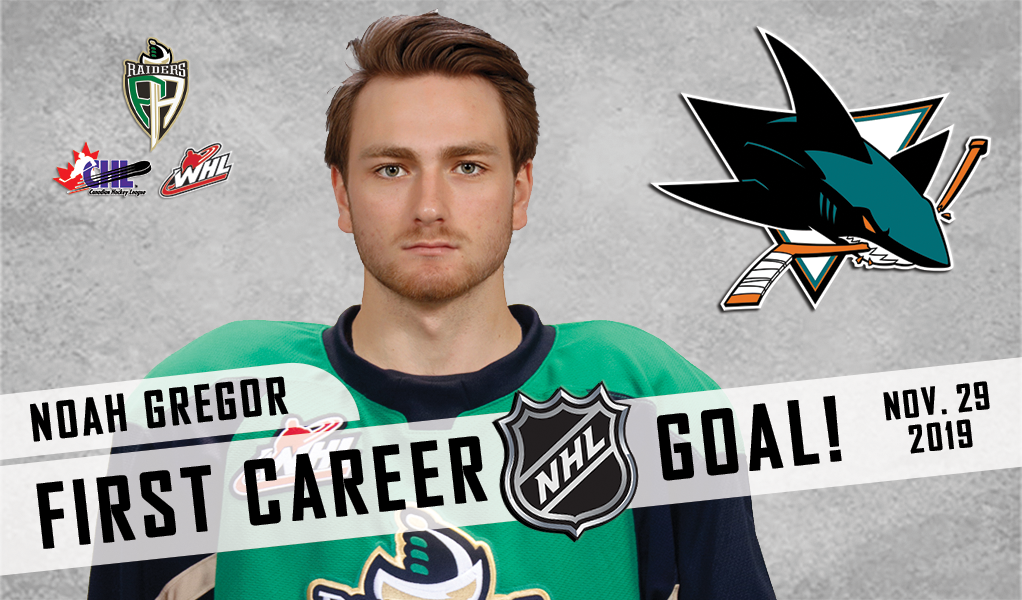 That’s a goal that Noah Gregor will always remember.

Skating in his 11th game this season Friday versus Los Angeles, the San Jose Sharks forward and Prince Albert Raiders graduate lit the lamp after speeding down the left side and firing a perfect shot glove-high on Kings netminder Jonathan Quick.

In all, it marked the first career NHL point for Gregor, who this season has split time with the AHL’s San Jose Barracuda, appearing in six contests that have seen him tally seven points counting two goals and five assists.

“It felt awesome. It took a little bit but it was awesome to see that puck go in for the first time,” Gregor told reporters following the 4-1 victory. “I feel a little more confident. Getting the first goal might help a little bit as well to have that confidence going into more games, so I definitely think that I am getting better.”

Skating in his first pro campaign after spending part of five seasons in the Western Hockey League counting stops with the Moose Jaw Warriors, Victoria Royals, and Raiders over 257 career contests that saw him record 129 goals and 164 assists for 293 points, Gregor’s junior career was highlighted by last spring’s Ed Chynoweth Cup win with the Raiders that saw the Saskatchewan club claim the league title for the first time since 1985.

His first NHL goal was a beaut (almost as good at that mo). Congrats, @n_gregs20!

“They did a good job tonight. It’s more of the contribution, more of the feel. I thought we could roll four lines,” added Sharks head coach and former OHL bench boss Peter DeBoer. “We came out on the right side of the ledger on it tonight which is obviously very important for us.”

Selected by San Jose in the fourth round of the 2016 NHL Draft, Gregor was previously picked by Victoria with the 55th choice in the 2013 WHL Bantam Draft. In 2015-16, he competed in the CHL Top Prospects Game, a season in which he also led all WHL rookies with 45 assists.