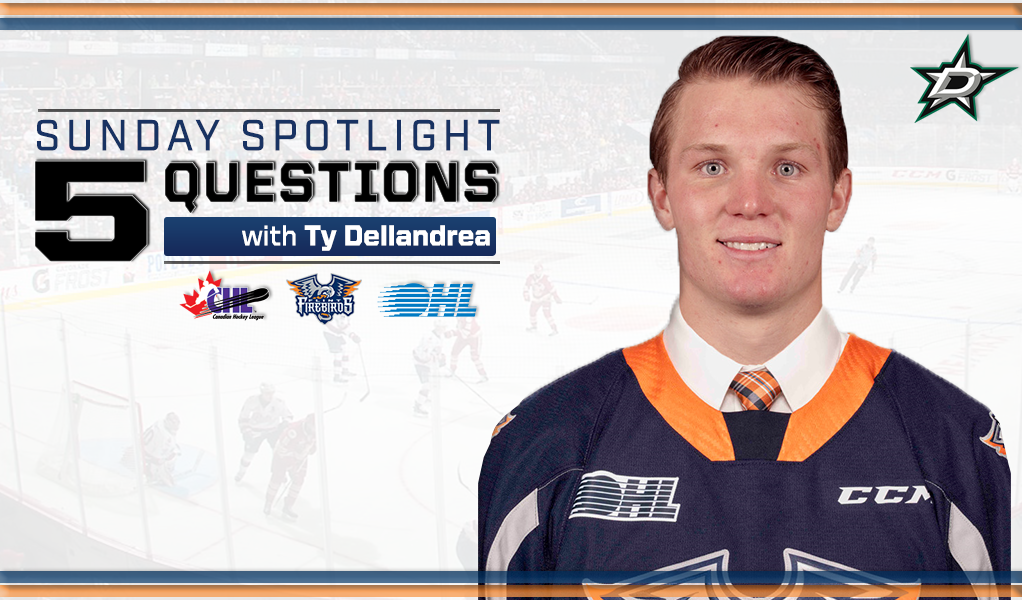 Serving in his fourth season with the Flint Firebirds, and second as captain, Dellandrea is a critical cog for the five-year-old franchise both on and off the ice, where he now stands as the club’s all-time leader in all major offensive categories.

This season, Dellandrea has continued to showcase his offensive acumen as he has tallied 26 points counting 11 goals and 15 assists across 23 appearances to sit second in team scoring and help the Firebirds put together their most impressive campaign in recent memory. It’s those sorts of scoring instincts paired with a natural ability to lead his teammates that made Dellandrea the 13th overall selection by the Dallas Stars in 2018.

The budding talent recently chatted with the Canadian Hockey League about his play this season, how he sees his role in Flint, and his goal of earning a spot with Team Canada at the coming 2020 IIHF World Junior Hockey Championship:

What can you say about the successful start to the Flint Firebirds season?

It’s been a good season so far. I think we got off to a hot start and it’s been fun this year. We’re having fun winning games and even though I think we have to get back on track a bit it’s been great so far.

Do you take pride in playing such a big role in growing the organization over four years?

Yeah, I think that’s something I wanted to do coming in, playing for Flint, I wanted to be a part of the change. Over the four years I think we’ve done a good job of turning it around. It’s been a fun process but it’s been a lot of work.

How does it feel to be a franchise record holder in all offensive categories?

What’s been your biggest focus point this season after getting feedback from the Dallas Stars?

I think I just want to play a great all around game and work on my leadership a bit here in Flint. Being a captain, I’m just trying to improve on playing an all around game as well as just focusing on being a good leader and leading these guys to a long run.

What was it like representing Team OHL and what would it mean to go one step further and play for Team Canada?

It was great representing Team OHL. It’s fun to come together with a lot of great players and with guys you grew up playing with and against. It would mean a lot to play for Canada at this coming World Juniors. It’s a goal of mine that I’ve been working at for a while so I’ve just got to keep working towards that.