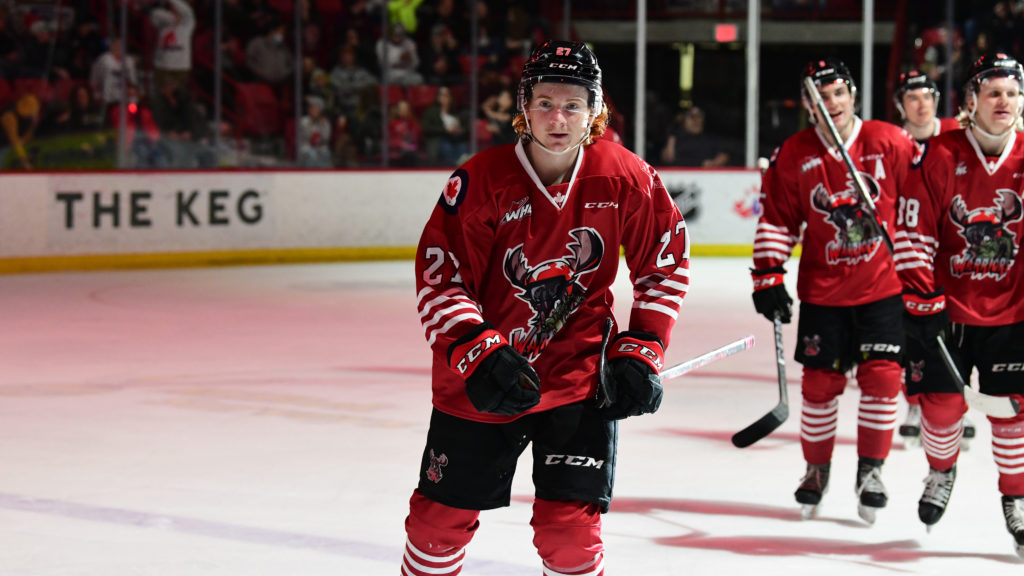 A little midseason motivation went a long way for Jagger Firkus this season.

At the midpoint of the 2021-22 season, the NHL’s Central Scouting had Firkus ranked 33rd among North American skaters as the Moose Jaw forward had 37 points in 34 games.

“When I saw that, I wanted to get higher and higher,” Firkus said of his midseason ranking. “But at the same time, it pushed me. I wanted to prove people wrong and I think I did that.”

Firkus first full WHL season saw him lead the Warriors in goals (36) and points (80) as a 17-year-old (he turned 18 April 29). Among NHL Draft eligible WHL skaters, his 36 goals led that department and after some incredible doozies along the way, he earned the nickname ‘Firkus Circus.’

“I put up points and I help my team on the offensive side,” he said. “I was doing my job throughout the year.”

His 12 goals and 29 power points led the Warriors, who finished second in the East Division. In 10 postseason games, he’d tally 12 points (six goals) before they were knocked out by the ICE in the second round.

But there’s no secret about it; Firkus is a creative genius with the puck. And he knows it.

“I worked on my shot with my older brother and that’s kind of where my release comes from,” he said. “I think my release catches goalies off guard and I’m not afraid to shoot the puck. In Moose Jaw, my coaches are really good at just letting me shoot the puck from anywhere as it’s got a good chance of going in.

🎥HIGHLIGHT OF THE NIGHT🎥

The Firkus Circus stole the show on day two of the #WHLPlayoffs.@MJWARRIORS | #NHLDraft | #WHLHoN pic.twitter.com/NF2nfeNkWN

That offensive creativity was on full display at the Kubota Top Prospects Game where he turned heads with a standout performance. He scored a wonderful solo goal in the first period where he took the puck down the left wing, cut inside on Jorian Donovan before unleashing a shot back across Ivan Zhigalov that soared over his glove.

With an assist on Jake Karabela’s game-winner, Firkus collected Team White Player of the Game honours after a 3-1 victory.

“I wanted to come here and show what I can do and I think I did that,” Firkus said post-game in Kitchener.

There’s no dobut that whatever NHL team drafts Firkus is going to get a gifted player. He stands only 5-foot-10 but in today’s game, it doesn’t matter. What matters is 36 goals in the WHL as a 17-year-old.

“It’s what you dream about as a younger kid,” Firkus said when he allowed himself to dream about getting drafted this week. “For me, I have the opportunity to go there and get drafted. It’s going to be a good opportunity for me.”

But while Firkus is savouring the opportunity to get drafted, there’s an itch to get back to work with Moose Jaw.

The Warriors have an impressive young nucleus that features not just Firkus, but fellow 2022 draft eligible prospect Denton Mateychuk. Additionally, Ryder Korczak, selected 75th overall by the Rangers in 2021, and Daemon Hunt, the 65th overall pick in 2020 by the Wild, are joined by CHL Rookie of the Year and 2023 NHL Draft prospect Brayden Yager to makeup an impressive foundation.

“I’m going to be anxious going to camp,” Firkus said. “Our team memo this year is we want to win. We know we have a very good team and we expect to be winning throughout and if we’re not, we’re going to be hard on each other.

“We want to have a deep playoff push. We all know that and I think we’re able to do that with the team we have.”