Debate the order but Nolan and Nico are undeniable Top Prospects 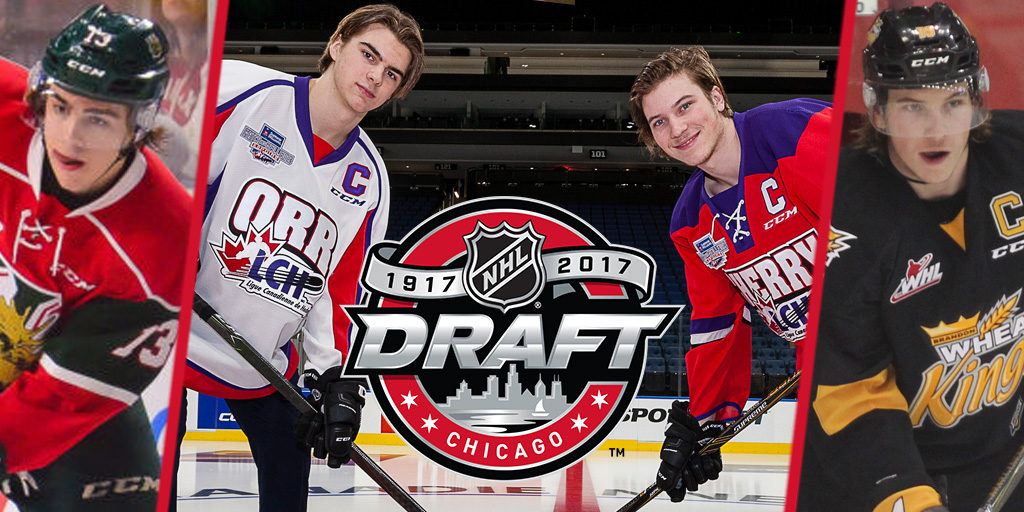 Will it be Nolan or Nico?

With just days to go, there is little clear consensus whether Nolan Patrick of the Brandon Wheat Kings or Nico Hischier of the Halifax Mooseheads will be called first on Friday night when the NHL Draft gets underway in Chicago.

For Patrick, he remains at the top of the draft rankings despite losing large stretches to injury this season. He was the top ranked North American prospect in NHL Central Scouting’s season-ending list and he won the Canadian Hockey League’s Top Prospect Award.

While he played well in limited action this season – 46 points in 33 games – Patrick’s status was bolstered by his two seasons before this one, including helping the Wheat Kings to the WHL title in 2015-16. Overall, Patrick registered 204 points in 160 games during his three full seasons in Brandon.

“It was a tough year with all the injuries but I think I came through it stronger to go through the adversity,” said Patrick. “But it wasn’t the ideal season for any hockey player.”

“To be put in the category (of possibly being selected first overall) is a pretty special feeling.”

Out of nowhere, seemingly, is Hischier, who was named the CHL Rookie of the Year this season and finished the season No. 2 on Central Scouting’s final rankings.

“The draft was always very real,” said Hischier, in reference to discussion surrounding him that began not long after he arrived in Halifax. “But now in knowing which teams picks first and second, I’m just really excited and looking forward to it.”

“I’ll take (everything) as it comes but for sure if I go No. 1 overall, I will be really, really happy…the key is to not think too much about it and focus on my summer training.”

Barring a trade, the Devils will pick between two players who represent roughly equal value but play a dissimilar style. Patrick is a classic, big, puck-savvy centre who has tremendous hockey sense and set-up ability with a reasonable goal-scoring touch as well. Hischier is a dynamic offensive pivot who, if he physically matures as expected, should develop into an offensive dynamo at the NHL level.

In an interesting twist, whoever is picked first will join 2010 No.1 overall pick Taylor Hall on the Devils. Hall, the former Windsor Spitfire, was picked first by the Edmonton Oilers seven years ago, where he played with three other first overall picks in Ryan Nugent-Hopkins (Red Deer Rebels), Nail Yakupov (Sarnia Sting) and Connor McDavid (Erie Otters).

“I’ve played with my share of first overall picks,” said Hall, who was traded to New Jersey a year ago. “You want them to come in and make them familiar with the setting and put them in a good spot. That’s very important for whomever we end up selecting.”

Hall’s Windsor Spitfires teammate, Adam Henrique, has remained in New Jersey since breaking into the NHL with the Devils in 2011. Like Hall, he will be an interested observer on Friday night.

“Winning the draft lottery for us was huge, a nice surprise,” said Henrique, “(winning it) has changed a lot of organizations. Our staff will do a great job going over all the details but I don’t have any insight on who we’re going to take.”

Henrique made the last comment in jest but his first remarks detail how serious the decision will be for the Devils organization.

Patrick has done nothing to lose the No. 1 ranking but if Hischier is picked first by the Devils, it will cap a meteoric run not seen in the modern history of the NHL Draft. Aside from him being a possible first-rounder, little was known of Hischier when he arrived in Halifax last fall. The son of a former professional soccer player, Hischier also has an older brother, Luca, who plays for Bern in the Swiss professional league.

He moved to Halifax to take advantage of the “Canadian atmosphere” in his draft year and he hasn’t looked back since his arrival. The 18-year-old started strong, was even better at the World Junior, then returned to Halifax and barely missed a beat. He had 86 points in 57 games for the Mooseheads.

Athletic genes run in Patrick’s family as well. His father, Steve, also played for the Wheat Kings and he was a first-round pick of the Buffalo Sabres, eventually playing 250 NHL games with the Sabres, Quebec Nordiques and New York Rangers. Steve’s younger brother, James Patrick, played 1,280 games for four different NHL clubs and suited up for Team Canada at the 1984 Olympics.

Nolan Patrick’s late grandfather, Stephen Patrick, played 13 seasons in the CFL for the Winnipeg Blue Bombers and served as a provincial MLA in the Manitoba Legislature after his playing career. He died in 2014.

While there remains much uncertainty who will go No. 1, Hischier appears certain to become the highest ever Swiss player taken. That mark was set by Nino Niederreiter of the Portland Winterhawks when he was picked fifth overall by the New York Islanders in the 2010 Draft.

“It will be quite an honour to become the highest Swiss player picked,” said Hischier. “I can’t say enough thank-yous to the people that have supported me (back home).”