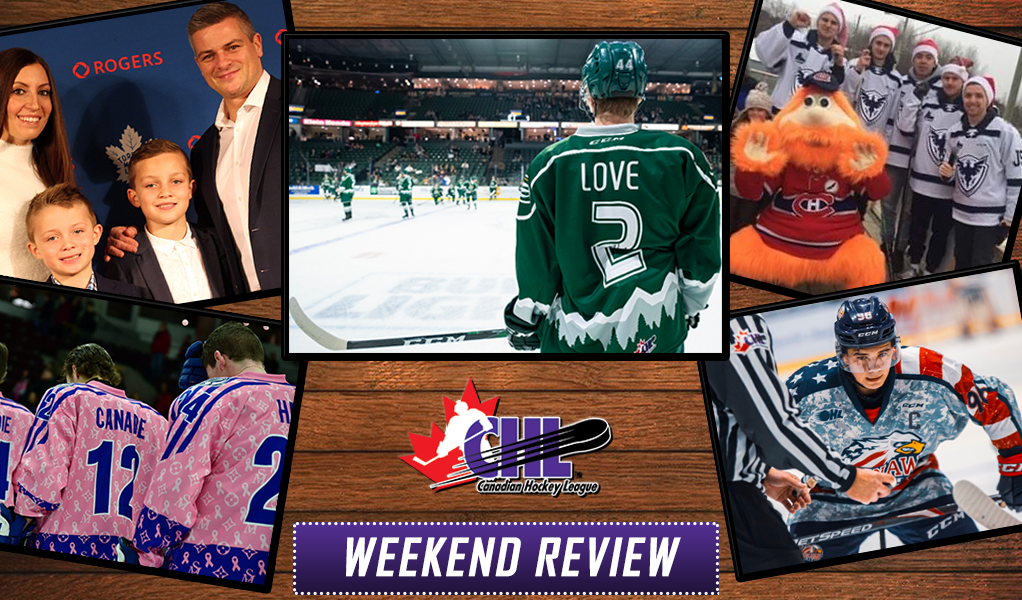 A busy week generated plenty of headlines across the Canadian Hockey League.

Raised to the rafters

A pair of CHL clubs honoured a former star this weekend, including the Everett Silvertips who paid tribute to Mitch Love with an inspiring jersey retirement ceremony.

Love was one of the original Silvertips joining the club in 2003-04 and playing the final two seasons of a five-year WHL career in Everett. He was a critical role player for the club registering 21 goals and 35 assists over two seasons and 129 career contests with Everett, which included a trip to the Ed Chynoweth Cup Final during the inaugural campaign.

Love to the rafters:

You Love to see it.

He was named captain in his final season in 2004-05, and went on to serve as an assistant coach in Everett for seven seasons. He joined the Saskatoon Blades as head coach in 2018-19.

Elsewhere, the Gatineau Olympiques raised Martin Menard’s iconic No. 25 to the rafters of the Robert Guertin Centre.

The man, the myth, the legend ✍🏼#Ménard25 pic.twitter.com/B6pNUvA3U1

Relive some of the top moments from @_Martin_Menard's #25 jersey retirement by @LesOlympiques! #QMJHL | #Ménard25

Over three seasons with the then Hull Olympiques from 1994-97, the hometown product collected 378 points counting 164 goals and 214 assists in 194 career contests. During his tenure, the Olympiques competed in two Memorial Cups, ultimately winning it all in 1997. Menard becomes the 11th player to have his number retired by the franchise, joining the likes of Luc Robitaille (1983-86) and Claude Giroux (2005-08), among others.

As Dale Hawerchuk continues his courageous battle with stomach cancer, the longtime head coach of the Barrie Colts was on hand at the Barrie Molson Centre on Saturday as the club recognized four players who spent their entire junior career with the franchise.

This past Saturday we honoured all four of our five-year Colts, Zach Hall, Hunter Tremblay, Aidan Brown, and Ben Hawerchuk, with special guest Dale Hawerchuk giving them their awards! Great to see Dale back in the rink! pic.twitter.com/du075CBYrY

“We give out a hard hat at the end of every game that has Dale’s name on it.”

Friday’s contest between the Sherbrooke Phoenix and Drummondville Voltigeurs was a milestone night for the visiting squad as it marked the 500th regular-season game in Phoenix history.

Joining the QMJHL in 2012, the ensuing seven full seasons has seen the club amass 193 total victories in addition to five trips to the playoffs. This season, led by Pittsburgh Penguins first-round pick Samuel Poulin, the Phoenix sit first place in the QMJHL with 42 points and a 20-3-2-0 record.

Congratulations to our captain & @DallasStars prospect @TyDellandrea on becoming the all-time goals leader for the #FlintFirebirds! He is now the all-time leader in goals, assists, points, game-winning goals and shots!

Theme nights are a staple of the CHL schedule with the latest showings including the Saginaw Spirit hosting First Responders Night on Saturday against the Windsor Spitfires that saw the squad skate in military appreciation themed jerseys.

In the WHL, the Swift Current Broncos paid tribute to their local sports brethren in sporting a Swift Current 57’s inspired jersey in recognition of the Western Canadian Baseball League club.

JERSEY REVEAL: This Friday we wear the @swiftcurrent57s orange and green. Like em? Own one at the CHL Auction site. https://t.co/lkmSrCeDWh pic.twitter.com/8tUkDP4k74

The Christmas season festivities continue across the CHL with a few more clubs getting into the holiday spirit by taking part in Santa Claus Parades and participating in other local holiday traditions. This time with the Phoenix, Broncos, Moncton Wildcats, and Prince George Cougars involved in the fun.

Ringing in the Christmas spirit at Market Square for the annual Christmas Tree lighting! 🎅🏻🎄 pic.twitter.com/h7BJWQCUuS

Thanks to all the came down to take part in the 26th @CityofPG Civic Light Up last night! 🎄 pic.twitter.com/QWjL2jDZpl

There has been no shortage of charitable efforts from junior hockey fans from coast to coast as evidenced by the success of the Wawanesa Toy Drive. After launching last week, the drive continued its 36-stop tour this weekend in six CHL markets, including Acadie-Bathurst, Blainville-Boisbriand, Kitchener, Moose Jaw, Regina, and Victoria.

The toys are piling up tonight for the @Wawanesa Toy Drive!

Yesterday's @Wawanesa toy drive was a rousing success! A big thanks to all who donated to the @uwgv pic.twitter.com/tCkmpLKurY

Fans are encouraged to donate new and unwrapped toys leading up to December 15, with all donors entered into a grand prize draw that will award a trip for two to the 2020 Memorial Cup Presented by Kia in Kelowna, B.C.

There is no end to Nicholas Canade’s giving spirit.

After going viral last season with his efforts to raise awareness and funds for the Canadian Cancer Society, the Mississauga Steelheads forward is back at it again after raising more than $6,000 in 2018-19 from his pledge to donate 25 cents for each of the first 10,000 likes of an Instagram post, with the final donation including monetary support from local businesses as well as the family member of a teammate.

Like the specialty Pink At The Rink jerseys from last week? Now is the chance to get yours and support the cause! Game worn jerseys are available for auction with 100% of the proceeds going to the @CCSGTA #SteelTheShow #BreastCancerAwareness

This season, Canade, who has been hit close to home by cancer after losing grandparents to the disease and with another grandmother as a cancer survivor, hopes to double last year’s donation. The Steelheads held their eighth annual Pink in the Rink night on Thursday against the London Knights, providing an opportunity for fans to show their support and contribute to the Canadian Cancer Society.

Mississauga wasn’t the only OHL club to fight cancer over the weekend as the Guelph Storm and Hamilton Bulldogs also held annual events at home games.

Also, a HUGE thank you to Marko Sikic’s brother, Luka, for dropping the puck tonight for us! 💜💖#IamtheSTORM pic.twitter.com/7PSecX98Hr

Storm rookie Marko Sikic was joined at centre ice by his brother Luka for the ceremonial puck drop in Guelph, while Bulldogs forward Jake Murray, a cancer survivor, was part of Hamilton’s puck drop.

A coaching change by one of the NHL’s most prolific franchises saw former Soo Greyhounds bench boss Sheldon Keefe step behind the bench with the Toronto Maple Leafs.

Thank you to everyone with @PLKingsCCHL, @OHLHoundPower and @TorontoMarlies for their role in getting us to this point.

Leafs Nation, we are honoured and privileged to be a part of @MapleLeafs and I'm excited to get to work back home tomorrow. #LeafsForever pic.twitter.com/NfByF4z6Mj

Over a trio of seasons with the Greyhounds, Keefe guided the club to three consecutive playoff appearances, including a then franchise record finish of 110 points in 2014-15 after tallying 54 victories in 68 regular-season contests to finish first place in the OHL’s Western Conference and earn CHL Coach of the Year honours.

Keefe’s success then took him to a four-plus year stint with the AHL’s Toronto Marlies, the Maple Leafs’ top minor-league affiliate, that culminated with a Calder Cup championship in 2018. As a player, Keefe skated two seasons in the OHL with the Toronto St. Michael’s Majors and Barrie Colts from 1998 to 2000 recording an impressive 237 points in just 132 games.