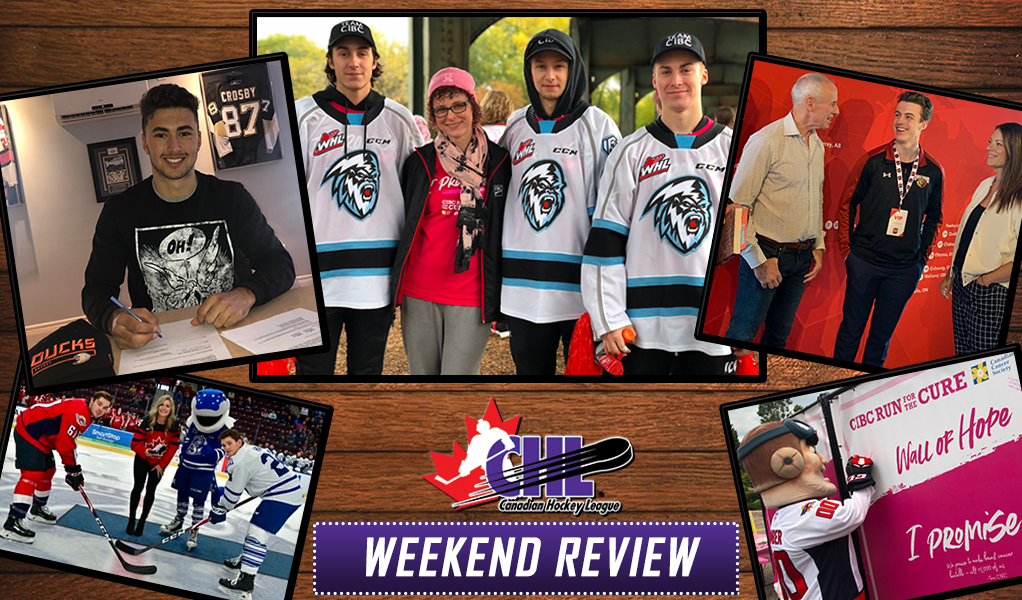 The 2019-20 Canadian Hockey League campaign is well underway with Week 3 coming to close and no shortage of engaging storylines from across the circuit:

CIBC Run for the Cure

CHL clubs counting players and team staff did their part to help make breast cancer beatable by participating in this weekend’s CIBC Run for the Cure, the largest single-day, volunteer-led event in Canada in support of breast cancer research.

We had a blast at the #CIBCRunfortheCure this morning cheering on all the participants! 💪🏻💪🏻 #YQL #WHLCanes pic.twitter.com/8EWi8KksEM

This morning Reece Harsch, Austin Schellenberg and Mike Ladymen went and helped out at the @cibc Run for the Cure! #CIBCRunfortheCure pic.twitter.com/MaqTRygitS

It was our honour to walk with courageous breast cancer survivors this morning. #CIBCRunfortheCure pic.twitter.com/aVPTew9omy

.@RocketsRocky and a few of the rookies attended the #CIBCRunfortheCure this morning to cheer on runners. pic.twitter.com/h8SY613Oyr

We are at the @cibc Run For The Cure today! Downtown Kamloops! pic.twitter.com/2rzfsnQCrn

Participants join the one-kilometre walk or five-kilometre run and help raise funds for the Canadian Cancer Society. Since 1992, the event has helped raise $445 million including $17 million on Sunday alone to fund breast cancer research projects. Over the years, the event has grown to count 57 communities across Canada, drawing more than 80,000 participants each year.

Sly had a blast helping everyone warm-up for today's CIBC Run for the Cure! We're so proud to be a part of the fight to cure breast cancer every year! #CIBCRunfortheCure pic.twitter.com/pmdq1DKvx1

Bomber and Spike are out at the #CIBCRunfortheCure this morning in support of the @cancersociety pic.twitter.com/IfA2ESPT30

THANK YOU for promising to make breast cancer beatable and supporting the #CIBCRunfortheCure! Together, we raised $17 million to fund breast cancer research and the country's largest support system for Canadians affected by breast cancer. RT to spread the good news!💛 pic.twitter.com/vDOhcqPV39

Thanks to everyone who came out yesterday for the #CIBCRunfortheCure. Get the full details on the great day. https://t.co/VGtVsjdvFq Together, we are #OneforChange pic.twitter.com/Wpijd9gGSS

Cancer awareness initiatives will continue throughout the season with several CHL clubs hosting their annual Pink in the Rink nights in association with the Canadian Cancer Society.

Extra special run for the Rebels

The Red Deer Rebels also took part in Sunday’s CIBC Run for the Cure but did so with a little extra motivation as assistant coach Brad Flynn’s fiancee Christine is currently battling cancer.

In addition to participating in the run, the players recently expressed a visible show of support by sporting brush cuts which they unveiled at a season kickoff barbecue.

Christine Flynn, 30, was diagnosed with breast cancer in April and is said to be on the road to recovery.

A bevy of CHL clubs marked Saturday and Sunday in celebrating World Girls Ice Hockey Weekend, doing so with pre-game ceremonial face-offs as well as in-game meet and greet opportunities.

Thank you to @RenataFast and @GGHA_Hockey for dropping the puck at today’s game for IIHF Girls’ Ice Hockey Weekend! 🏒#IamtheSTORM pic.twitter.com/UxpILYJJgw

Among the participating clubs included the Guelph Storm, who welcomed Toronto Furies defenceman Renata Fast with a ceremonial face-off prior to a weekend tilt versus the Flint Firebirds. A Hamilton native, Fast was part of the Canadian women’s team at the 2018 Winter Olympics in Pyeongchang that came home with the silver medal. The Hamilton Bulldogs also helped spread awareness for the women’s game with local stars Laura Fortino and Sarah Nurse.

As we wrap up World Girls Hockey Weekend here in Hamilton, we want to thank everyone who came out, participated and showed their support for the growth of women's hockey worldwide! #WGIHW pic.twitter.com/efUpO0uxne

Elsewhere, the Mississauga Steelheads held a similar event with fellow silver medalist Natalie Spooner on hand for Sunday’s matinee versus the Windsor Spitfires. After dropping the puck in a ceremonial face-off, Spooner greeted fans with an on-site autograph signing session.

Launched in 2011, World Girls Ice Hockey Weekend is a global initiative that encourages girls to try hockey with on-ice sessions introducing them to basic skills, sportsmanship, and teamwork. According to the International Ice Hockey Federation, there are currently 88,500 registered female hockey players in Canada.

Halifax Mooseheads forward Benoit-Olivier Groulx is the latest CHL talent to sign on the dotted line, landing an entry-level contract with the Anaheim Ducks.

Selected 54th overall by Anaheim in the 2018 NHL Draft, Groulx was returned to the Mooseheads earlier this month after taking part in the Ducks’ training camp and preseason schedule in which he posted one assist in two appearances. With Halifax, Groulx becomes the second active player to sign an NHL contract, joining defenceman and Detroit Red Wings prospect Jared McIsaac. The Mooseheads also have two other talents whose rights are held by NHL clubs, including forward Raphael Lavoie with the Edmonton Oilers and netminder Alexis Gravel with the Chicago Blackhawks.

With the Mooseheads last year, Groulx flashed the talent that originally led to his selection by the Ducks in 2018 as he wrapped up his third season with 80 points in 65 games to finish second in team scoring and help the club advance to the Championship Final of the 2019 Memorial Cup Presented by Kia. Groulx has scored twice with one assist across his first three games back in action.

The puck dropped for the NHL season last week with the league’s 31 clubs icing lineups that included 339 active players who previously participated in the WHL, OHL, or QMJHL. The CHL remains the top supplier of NHL talent as nearly 50 percent of players are CHL graduates.

339 graduates from @OHLHockey, @TheWHL, and @QMJHL teams were named to active rosters to open the 2019-20 #NHL season.

Across the league, other alumni making headlines includes Portland Winterhawks graduate Cody Glass, a centre with the Vegas Golden Knights who had a perfect debut last week when he scored in his first NHL appearance. Adding to the feat was that Glass, the sixth-overall pick in the 2017 NHL Draft, became the first-ever draft selection by the Golden Knights to score a goal.

After a tremendous four years in Portland, our former captain becomes the 125th Winterhawk to play in the @NHL!

One of the more notable CHL debuts came from Canadiens defenceman Cale Fleury, a 20-year-old who split the end of his fourth WHL season between the Kootenay ICE and the Regina Pats in 2017-18, who had the opportunity to line up opposite older brother Haydn who played four seasons with the Red Deer Rebels and is now a member of the Carolina Hurricanes.

Meanwhile, alumni celebrations continue out west where former defenceman Chris Phillips’ No. 4 will be retired by the Ottawa Senators later this season prior to a February content versus the Buffalo Sabres. Phillips, who skated in 119 games with the Prince Albert Raiders and Lethbridge Hurricanes, was the first-overall selection in the 1996 NHL Draft. The Calgary native spent his entire career with the Senators, spanning 17 seasons and 1,179 regular-season appearances to rank first all-time in franchise history.

With the start of the new CHL campaign comes the launch of the sixth season of Rogers Hometown Hockey, premiering Sunday from Halton Hills, Ont. The iconic program will visit 25 Canadian communities this season, including two in each of the CHL’s three regional leagues. The first of those visits comes Jan. 19 from Hamilton during a telecast of the Winnipeg Jets taking on the Chicago Blackhawks.

We don't do hockey, we are hockey. The reason that this is true, is because the writer is you.

On hand for Sunday’s launch was Owen Sound Attack forward Ethan Burroughs, an OHL rookie and native of nearby Georgetown, Ont., who played minor midget with the Halton Hurricanes. This season, the freshman has needed little time to adapt to his new surroundings as he has had an immediate impact with the Attack, recording six points in as many games, including a successful two-assist debut against the Ottawa 67’s. Burroughs joined Owen Sound this season following his 29th overall selection in the 2019 OHL Priority Selection.

Ethan Burroughs is a former Halton Hurricane, and he had an opportunity to hang out and chat with @RonMacLeanHTH and @TaraSlone. #MadeForMore pic.twitter.com/FE2ho3F6No

Tune in next Sunday when the Rogers Hometown Hockey Tour continues in Halifax.