CHL Weekend Review: May the 4th be with you 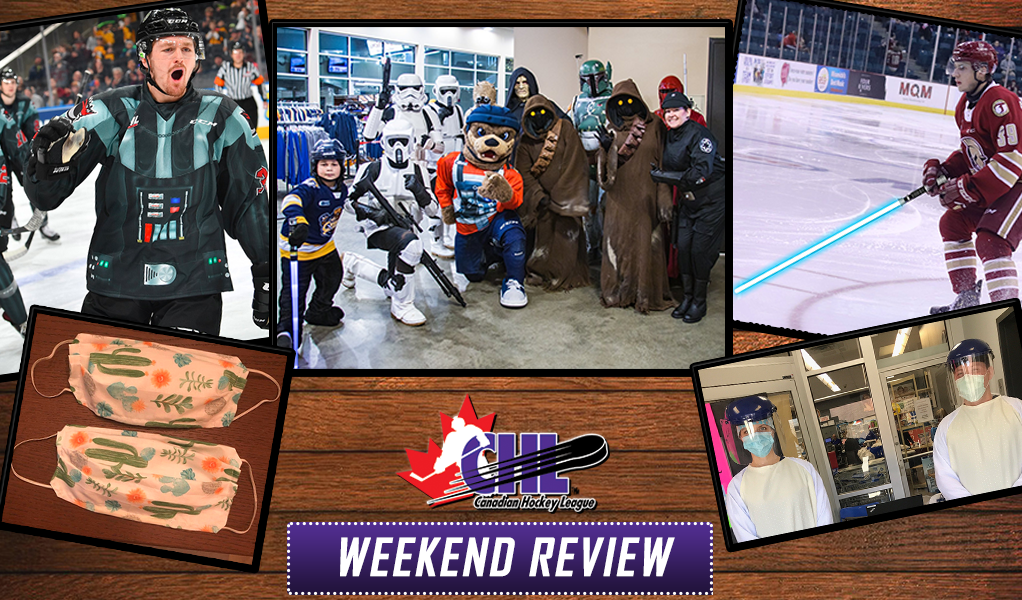 May the 4th be with you, as they say, as we take a closer look at some of the latest news and notes from around the Canadian Hockey League to start the new month.

Here are some of the highlights:

A popular social media theme paying tribute to Star Wars made its way across team timelines from coast-to-coast with the Acadie-Bathurst Titan, Erie Otters, and Kelowna Rockets getting in on the fun.

#MayThe4thBeWithYou … from a distance! pic.twitter.com/eqxdhKfUL8

Our partners at the Canadian Mental Health Association launched the beginning of mental health week with support from Canadian Prime Minister Justin Trudeau who shared an important message about remaining socially connected. This year’s CMHA theme is #GetReal which encourages us all to speak openly and honestly about how we feel.

"While we must continue to be physically distant, it is more important than ever to remain socially connected." Thank you @CanadianPM for acknowledging #MentalHealthWeek and the important role #MentalHealth plays in our lives. #GetReal https://t.co/cm5y8ihHTL

After Hours with Dale Hawerchuk

Just weeks after ringing the Bell of Hope, a symbolic milestone for cancer patients at the end of their chemotherapy treatments, Dale Hawerchuk joined Hockey Night in Canada’s Scott Oake to provide updates on his health and more. Earlier this season the Hall of Famer stepped down from behind the Barrie Colts bench to undergo his battle.

"So proud of the way you've battled. You've been an inspiration to all of us."

On After Hours, cancer survivor and former NHLer Eddie Olczyk reached out to @DaleHawerchuk10 with a message of support from the hockey community.

The NHL recently announced a one-year extension of the existing CHL Agreement for the 2020-21 season. Part of the agreement maintains the status of under-20 players drafted by NHL teams from the CHL who would be assigned back to their club teams if not listed on NHL rosters.

The @NHL extends Player Development Agreements for the 2020-21 season. pic.twitter.com/ttigXvENjZ

Due to the ongoing COVID-19 pandemic, Hockey Canada announced the cancellation of the 2020 Hlinka Gretzky Cup. The event was scheduled for August 3-8 in Edmonton and Red Deer and annually features Canada’s Summer Under-18 Team showcasing top NHL Draft prospects for the upcoming season. The event will return to the Czech Republic and Slovakia in 2021 and Canada in 2022.

NEWS | Due to the ongoing coronavirus (COVID-19) pandemic, the 2020 Hlinka Gretzky Cup, scheduled to return to Edmonton and Red Deer, Alta., from Aug. 3-8, has been cancelled.

Kingston Frontenacs Equipment Manager Chris Cook has been hard at work using his sewing skills to create Personal Protective Equipment for frontline workers in the fight against COVID-19.

We would like to acknowledge the great job our Equipment Manager, Chris Cook is doing. He is using his skills to produce protective equipment for the fight against COVID-19.

Frontline workers among us

Several CHL teams took to social media to acknowledge the brave work being done on the front lines by healthcare professionals near and dear to their hearts. Some examples include the medical staffs for the Drummondville Voltigeurs and Gatineau Olympiques, and Oshawa Generals forward Ryan Gagnier’s mother who works as a nurse.

We have nothing but appreciation for the dedicated front line workers who continue to fight the COVID-19 battle.

Ryan Gagnier’s Mom, Michelle, is one of those workers. She is a proud nurse.

We thank her and all medical professionals during this unprecedented time.#puckCOVID pic.twitter.com/3RFd6UwnK4

CHL players continue to stay active at home as they practice their skills away from the rink. Quinton Byfield of the Sudbury Wolves puts on the rollerblades, Jett Woo of the Calgary Hitmen does too but adds his full gear, and Elias Cohen of the Erie Otters works on his stickhandling under the watchful eye of his dog Crosby.

Practice and playtime @byfield55 and 🐶 putting in the work 👊 “We’re all in this together. #stayhome #staysafe and thank you to all essential workers” #runwiththepack🐺 #puckcovid #HockeyAtHome pic.twitter.com/sXlMGppu59

Chicoutimi Sagueneens head coach Yanick Jean recently offered a nice message of encouragement for his community, Colton Kammerer of the Sarnia Sting shows off some dance moves, and Rimouski Oceanic mascot Louky traveled around the area visiting fans from a distance.

Young fans at home can stay active with help from the Blainville-Boisbriand Armada and Ottawa 67’s who each put together fun colouring sheets, while the Lethbridge Hurricanes put together a team map of hometowns as part of Alberta’s Education Week.

Today is hometown day with the #WHLCanes for #EducationWeek!

The Calgary Hitmen have announced a $15,000 donation to support the Siksika Nation to serve as a legacy to their inaugural ‘Every Child Matters’ game held on February 1 which also celebrated the Blackfoot culture.

HTV: Zoom interview with Tyler White CEO of Siksika Health Services
The Calgary Hitmen announced last week a $15,000 donation to Siksika Nation.
The funds serve as a legacy to the inaugural ‘Every Child Matters’ game which was held on February 1.https://t.co/DfL4B24Vpw pic.twitter.com/RDVV0H69z2

Top NHL Draft prospect Cole Perfetti’s community work in Saginaw hasn’t stopped despite season’s end with a recent announcement of a partnership between involving his not-for-profit program with local restaurant Bringer Inn and Covenant HealthCare to provide meals to the Environmental Service and Supply Chain Employees.

The Halifax Mooseheads’ Herd Hero of the Week, the Prince George Cougars’ Her of the Week, and the Charlottetown Islanders’ Frontline Warriors campaign are all recent examples of CHL teams recognizing members of their communities who are truly making a difference.

We proudly introduce Cst. Heidi Stevenson as the 1st
Herd Hero of the Week. We're now taking nominations from you. A hero can be anyone who has continued to work during the pandemic in order to benefit Nova Scotians.

Introducing our first "Hero of the Week," Rob Endel! Do you know someone who deserves to be recognized? Someone who goes above and beyond? Nominate them today to be our next Hero of the Week!

Countless incredible people across Prince Edward Island are putting their health on the line for us. Join us in thanking those people; nominate someone today to be honoured as a Frontline Warrior!

Many from the league’s partnership family have also taken to social media to express their gratitude and appreciation for essential workers during the pandemic. Check out some recent examples of videos and messages from Kia Canada, Kubota Canada, Tim Hortons, CIBC, and the Hockey Hall of Fame.

Here’s our way of saying “Thank You” to all the essential workers, and the many people out there keeping us safe, our cities running, and our spirits up.

Share your stories with the #TogetherWithKia or tag someone who has inspired you to share your message of thanks. ❤️ pic.twitter.com/1y3kfXy6nX

For Earth, For Life, For Each Other #COVID19 pic.twitter.com/HuoBk1JkGN

👏👏👏 A round of applause for frontline workers across the country, like the doctors, nurses and staff @LakeridgeHealth in Oshawa, ON, for all that they’re doing to serve their communities. Thank you for all your hard work pic.twitter.com/D0ozrEvqHn

This #DoctorsDay, we want to extend our deepest thanks to our healthcare heroes for all they’re doing in local communities. 🩺 ❤️ pic.twitter.com/Ad0qFU9HZm

To all the Health Care and Front Line workers of the coronavirus pandemic, we send a sincere thank you the best way we know how! pic.twitter.com/eEZbAyH4Gk

The Purolator Tackle Hunger program, which made its way to several CHL games this past season, continues with the dedicated goal of helping Canadian communities by encouraging donations for those in need.

The need for food assistance across the country is greater than ever before and we're dedicated to helping Canadian communities. Together we can #tacklehunger. Visit https://t.co/ZL8VJYCso8 to donate to @FoodbanksCanada today. pic.twitter.com/UoZONVPpnP

The Kingston Frontenacs have announced that after two seasons of serving as the team’s head coach, Kurtis Foster will not be returning for the 2020-21 campaign. A replacement has not yet been announced.

The Kingston Frontenacs are announcing changes to their coaching staff with the dismissal of head coach Kurtis Foster.

“We would like to thank Kurtis for his hard work and dedication during his tenure with the Frontenacs.”

Dylan Seca, who has spent the past five seasons as the Sarnia Sting’s Director of Player Personnel, has been promoted to the position of General Manager. He replaces Nick Sinclair who recently departed the organization to pursue new opportunities.

Dustin Wolf of the Everett Silvertips, one of the league’s goaltending leaders during the 2019-20 season, has signed his entry-level contract with the Calgary Flames after being a seventh round selection by the club last June. Also signing this past week was defenceman Samuel Bolduc, a second round pick of the New York Islanders in 2019, who finished the year as a member of the Sherbrooke Phoenix after playing parts of four seasons with the Blainville-Boisbriand Armada.

Another pair from the league’s overage class of graduates will embark on their professional careers next season in the American Hockey League including James Hamblin of the Medicine Hat Tigers who joins the Bakersfield Condors, and Matthew Struthers of the Owen Sound Attack who will play for the Lake Erie Monsters.

The Condors have signed Edmonton native James Hamblin to a two-year #AHL deal. Welcome to #Condorstown!

UPDATE: Matthew Struthers has been signed to @TheAHL contract https://t.co/t9h2H9RL9h

Nick Deakin-Poot, who finished his five-year CHL career as a member of the Saint John Sea Dogs has committed to use his league scholarship to pursue his hockey and academic goals with the Acadia Axemen in the fall. Kade Landry of the Hamilton Bulldogs will also head to the Atlantic University Sport conference where he will play for the UNB Reds. Another pair of former CHL players will join them in U SPORTS programs including Hayden Davis, most recently a member of the Mississauga Steelheads, who will attend the University of Toronto, and Adam Capannelli who last played for the Gatineau Olympiques, who will join the Concordia Stingers.

We are proud to welcome Nick Deakin-Poot to the Acadia Axemen hockey family!

Read more about Nick and hear from Coach Burns on what to expect from the new Axemen recruit here:https://t.co/ZGKLMML812#GoAcadiaGo #AcadiaPride #HockeyMattersHere pic.twitter.com/hq8QXNbddK

Welcome to the Blues family, Hayden! 💙

Forward Dalton Duhart of the Saginaw Spirit was the winner in the sixth of eight Quarter-Final matchups in the #CHLShowdown Playoffs that features 24 weekly vote winners from the 2019-20 regular season vying for the crown of the year’s top play as chosen by the fans. New matchups will launch every Tuesday afternoon at chlshowdown.ca.

The sixth of eight Quarter-Final matchups in the #CHLShowdown Playoffs was won by @Dalton_DuHart19 of @OHLHockey’s @SpiritHockey who earned an overwhelming 61% of your votes.