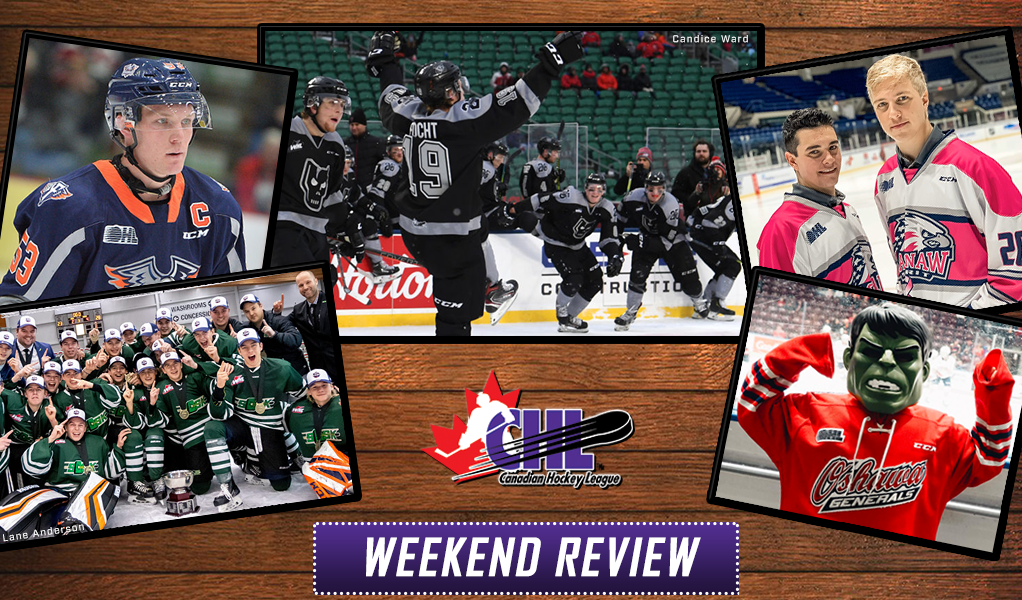 A busy week in the Canadian Hockey League generated plenty of headlines.

Here’s the latest from around the circuit:

The WHL took it outside with its third-ever Prairie Classic in a showdown between the Calgary Hitmen and Regina Pats hosted from Mosaic Stadium, home of the CFL’s Saskatchewan Roughriders.

The @WHLPats & @WHLHitmen put on an incredible performance at the 2019 WHL Prairie Classic. Experience all the sights & sounds from Sunday's spectacle. pic.twitter.com/drZKkNoWr8

In a rematch of the 2011 outdoor game, Sunday’s contest was played before more than 15,000 faithful and ended in dramatic fashion as Hitmen forward and Vancouver Canucks prospect Carson Focht lit the lamp in the extra frame to give his side the 5-4 decision.

The event tied in with a hockey-themed weekend in the Saskatchewan capital that also featured the neutral site Heritage Classic between the Calgary Flames and Winnipeg Jets.

The outdoor showdown wasn’t the only major event happening out west this week as the calendar also included the WHL Cup, a four-team, five-day series that features teams representing the four Western Canadian provinces with rosters constructed primarily with players selected in the 2019 WHL Bantam Draft.

For the first time in the tournament's history, @sask_hockey are champions at the #WHLCup!

This year’s event marked the eighth-ever WHL Cup in addition to a changing of the guard as Team Saskatchewan won it all for the first time in tournament history following Sunday’s 4-2 victory over the Manitoba squad. Leading the way for the winning side was forward Carter Dereniwsky, a native of Canora, Sask., who finished the tournament with six points counting three goals and three assists. Dereniwsky was selected 39th overall by the Victoria Royals in the 2019 WHL Bantam Draft.

Rounding out the WHL, there was cause for celebration in Kamloops after head coach Shaun Clouston notched his 400th career victory in Friday’s 2-1 win over the Royals. With the victory, Clouston becomes only the 17th bench boss in WHL history to reach the 400-win milestone.

A native of Viking, Alta., Clouston is in his first season behind the bench with the Blazers following previous head coaching stints with the Tri-City Americans and Medicine Hat Tigers. Clouston continues his pursuit for top spot on the WHL leaderboard that is headlined by the legendary Don Hay, who recorded 750 career wins in addition to coaching the Blazers to back-to-back Memorial Cup titles in 1994 and 1995.

Chosen fifth overall by the Firebirds in the 2016 OHL Priority Selection, Dellandrea went on to be drafted 13th overall by the Stars two years later. Across four seasons with Flint, Dellandrea has notched 68 goals and 92 assists in 194 career contests. Uprooting from Plymouth to Flint in 2015, the rebranded franchise is seeing the fruits of its labour this season with its best start in team history as the Firebirds have won eight of their first 11 games to sit one point back of first place in the OHL’s West Division.

Two more CHL talents have inked entry-level contracts, beginning with Niagara IceDogs forward Philip Tomasino, the 24th overall selection from the 2019 NHL Draft who landed a three-year agreement with the Nashville Predators. A native of Mississauga, Ont., Tomasino is off to a torrent pace in his third season with the IceDogs as he has tallied a team-leading 25 points counting 10 goals and 15 assists across 15 appearances.

The #SJSharks have signed forward Dillon Hamaliuk to a standard, entry-level contract. https://t.co/fz4unH3LeV

Also signing on the dotted line was Kelowna Rockets forward and San Jose Sharks prospect Dillon Hamaliuk. Beginning his WHL career with the Seattle Thunderbirds in 2016, Hamaliuk joined the 2020 Memorial Cup Presented by Kia host Rockets this season where through 12 games he has recorded five goals and five assists. Alongside Tomasino, Hamaliuk becomes the 22nd CHL player selected in the 2019 NHL Draft to have since signed an entry-level contract.

Schultz gets the ‘C’

The Royals have a new leader as forward Phillip Schultz will don the captaincy this season.

What a special weekend! I’m really proud to get this opportunity to be the captain of the @victoriaroyals. Thanks to my teammates and the staff!
And again a huge congrats to the best equipment manager on your 1000th game! @m_auerbach pic.twitter.com/7uqvbueSZO

Selected 38th overall in the 2018 CHL Import Draft, the native of Denmark becomes the first European-born player to captain a WHL club since Swedish forward Marcus Jonasen captained the Tri-City Americans during the 2004-05 campaign. As for Schultz, who enters his second season with the Royals following a successful rookie year that saw him finish with 19 goals and 17 assists across 60 appearances, he becomes the 39th new captain across the CHL in 2019-20.

London Knights co-captain Alec Regula has experienced the first trade of his career however won’t be relocating any time soon.  The 2018 third round pick of the Detroit Red Wings had his rights traded to the Chicago Blackhawks in exchange for former Niagara IceDog Brendan Perlini.

TRADE ALERT: The #Blackhawks have acquired defenseman Alec Regula from the Detroit Red Wings in exchange for forward Brendan Perlini.

Regula will remain with the London Knights of the OHL. pic.twitter.com/hctyz1M1QZ

Regula, a native of West Bloomfield, Michigan, is playing in his third OHL season with the Knights and has 11 points through 10 games on the back end.

Pink in the Rink

Over $7000 raised with Head Shave Event for Hockey Fights Cancer with the Attack + @CCSBluewater !

Thank you for your support!

Elsewhere, the Owen Sound Attack did their part in helping fight cancer with the Head Shave Event that saw 17 participants including six Attack players sport a buzz cut while helping raise more than $7,000 for the Canadian Cancer Society.

Theme nights continued in the OHL as both the Oshawa Generals and Ottawa 67’s hosted Halloween-themed games where fans were invited to dress up and trick or treat inside the arena. Adding to the treat was that both clubs sent their fans home with a victory as the Generals downed the Hamilton Bulldogs while the 67’s put up a big win against the Sarnia Sting.