CHL Weekend Review: Back on ice to end the year 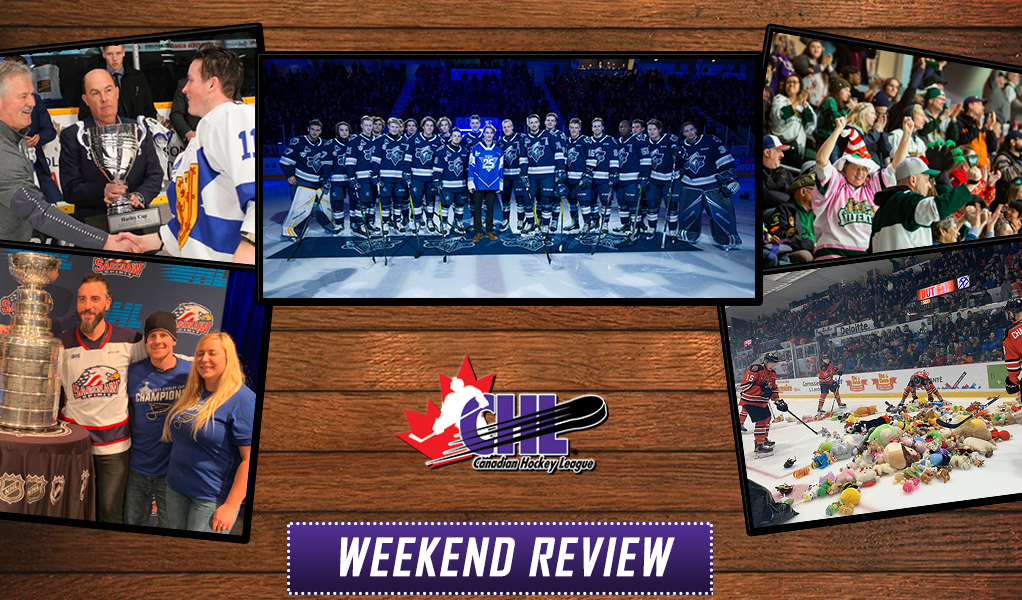 The second half of the Canadian Hockey League season is officially underway!

Here’s a look at some of the action on and off the ice since the end of the holiday break and before the change of the calendar year.

The puck dropped on Friday night with a full slate of WHL games. Fans flocked through the turnstiles across the league including Everett where the first place Silvertips welcomed the night’s largest crowd at 7,563.

The league’s most popular holiday tradition continued after Christmas in Drummondville where Xavier Simoneau’s goal launched 4,400 furry critters from the Voltigeurs faithful that will benefit families and children in need.

The Rimouski Oceanic held a touching tribute in honour of Vincent Boily prior to Sunday’s game. After signing with the QMJHL club, Boily was involved in a tragic snowmobiling accident in December, 2017, that left him with partial paralysis. While Boily’s never officially played a game in Rimouski, he will always be an Oceanic.

The 2019 Hurley Cup was awarded Sunday night in Sydney to the Cape Breton Eagles following their second straight victory over the Halifax Mooseheads. The Nova Scotia holiday prize was introduced in 2016 for the winner of a two-game provincial home-and-home series based on aggregate score.  Both clubs wore Nova Scotia inspired sweaters and raised money for local causes.

Thanks to all our fans for filling the NEST and bringing the excitement!

The force was strong in Charlottetown and Erie as the Islanders and Otters returned from the holidays to partake in Star Wars themed games and picked up two points each in the process.

A long time ago, in a galaxy far away…

It's time to #ProtectTheGalaxy! Let's get this game started! pic.twitter.com/4Sqw7HUUDd

RECAP: Force is strong with Erie as the Otters come from behind to top IceDogs 5-4 on Star Wars Night. Download the @livesource app to bid on our game worn Star Wars themed jerseys. Auction proceeds benefit @UnitedWayErie's Imagination Library.

Holidays are best spent with family and friends and the Flint Firebirds extended their circle to celebrate with their fans following Sunday afternoon’s game.

Our extended family 🥰 Thanks to everyone that came out for our Family 'FUN'day and post-game skate!

The Kingston Frontenacs made a couple of announcements on Saturday including the appointment of 15-year-old Shane Wright as an alternate captain, and the commitment of second overall CHL Import Draft pick Martin Chromiak. Wright leads all OHL rookies in scoring, while Chromiak is a top prospect for the 2020 NHL Draft.

PS…We may have some more news coming later today…😏 pic.twitter.com/G0ZLJSvSdw

Remember when we said we may have some more news….

Anthony Gagnon has been appointed the 24th captain in Quebec Remparts history. The club made the leadership announcement soon after the transaction involving fellow overage forward Felix Bibeau to the Chicoutimi Sagueneens.

The Wildcats are pleased to announce the appointment of Daniel Lacroix as the team's new Head Coach.

Welcome back to Moncton Dan!

Christmas couldn’t get much better for Aidan Dudas of the Owen Sound Attack and Nikita Okhotyuk of the Ottawa 67’s who both signed NHL entry-level contracts over the holidays.

Dudas, currently with Canada’s National Junior Team, was a fourth round pick by the Los Angeles Kings in 2018, while Okhotyuk was a second round pick of the New Jersey Devils in 2019. He becomes the league’s 26th player from June’s draft to put pen to paper.

The LA Kings have signed forward @AidanDudas to a three-year entry-level contract.https://t.co/56nNWM6GI0

We've signed our 2019 second-round pick to an entry-level deal.#WeAreTheOnes | #NJDevils

Whitby, Ontario, was the final 2019 stop on the Rogers Hometown Hockey Tour and featured an inspirational story about Owen Brady. The Oshawa Generals prospect was diagnosed with osteosarcoma in his OHL Draft year and is on the road to recovery.

In his @OHLHockey draft year, Owen Brady was diagnosed with osteosarcoma.

Now on the road to recovery with support from his family, the hockey community & SickKids hospital, the @Oshawa_Generals prospect is determined to play in the OHL one day.

The Broncos still remember the tragedy and how it has molded the team and community into what it is to this day. In 2016 a memorial was unveiled at the crash site and is visited by thousands every year, including most WHL teams when they pass through Swift Current.

“What we keep in memory is ours…unchanged forever.”