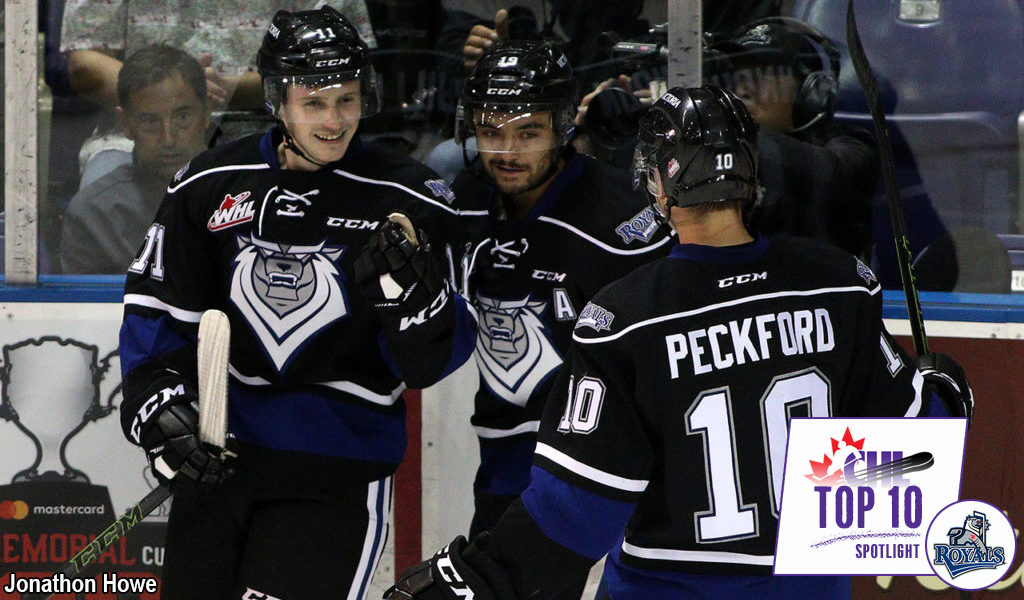 Leading the Western Hockey League both offensively and defensively early in the season, the undefeated Victoria Royals are firing on all cylinders out of the gate, continuing their torrid pace with an 8-2 win over the Tri-City Americans on Tuesday.

The Royals feature a league-high 43 goals and a league-low 14 against through their franchise best 7-0-0-0 start to the 2017-18 season. They’ve failed to score six goals in a game just twice so far as Calgary Flames prospect Matthew Phillips has fuelled a multi-pronged attack with 18 points (5-13–18), the third highest total in the WHL.

“Speed is a big staple of this team, and transition is also a big strength,” he told Cleve Dheenshaw of the Victoria Times Colonist following Tuesday’s win. “[Soy and Reddekop] are fifth-year players and they are taking a lot of pride in this season and in being leaders.”

Reddekopp has fully recovered from a case of strep throat while Soy had a goal and two assists in Tuesday’s win.

“It’s exciting to be back,” Soy told the Times Colonist.” This is a special group that has moulded quickly. Chaz and I just want to add to the mix and make this [Royals] team better.”

Fourth-year veteran and former first round WHL Bantam Draft choice Dante Hannoun has also pitched in on the Victoria attack, producing 15 points (8-7–15) through his first seven games while 19-year-old addition Jared Legien has enjoyed a WHL resurgence with 14 points (3-11–14) after spending last season with Yorkton of the SJHL.

Outhouse, who fittingly features an outhouse painted on his mask this season, remains unsigned by an NHL club despite consistent success over two seasons. The 6-foot-1, 180Ib. native of Likely, BC wasn’t drafted into the WHL either and has had to work to earn opportunities in his young career. He attended Development Camp with the expansion Vegas Golden Knights back in June.

Though he’s still chasing his NHL dream, Outhouse continues to play for the love of the game.

“I believe they (NHL teams) don’t like smaller goalies. But that’s not something I can control about myself,” he told the Times Colonist back in late August. “I obviously want to be picked up and play in the NHL, but I don’t go into this season feeling I need to prove anything to anyone.”

“I play hockey because I love it and I want to win.”

There’s been plenty of that happening under new head coach Dan Price on the island, something the Royals look to continue as one of two remaining undefeated teams in the Western Hockey League headed into another home date against Tri-City on Wednesday.

Victoria hits the road for seven straight starting Friday night in Spokane before they head to Seattle on Saturday. They take an Eastern Conference trip through Edmonton, Regina, Brandon, Saskatoon and Prince Albert over the next two weeks.