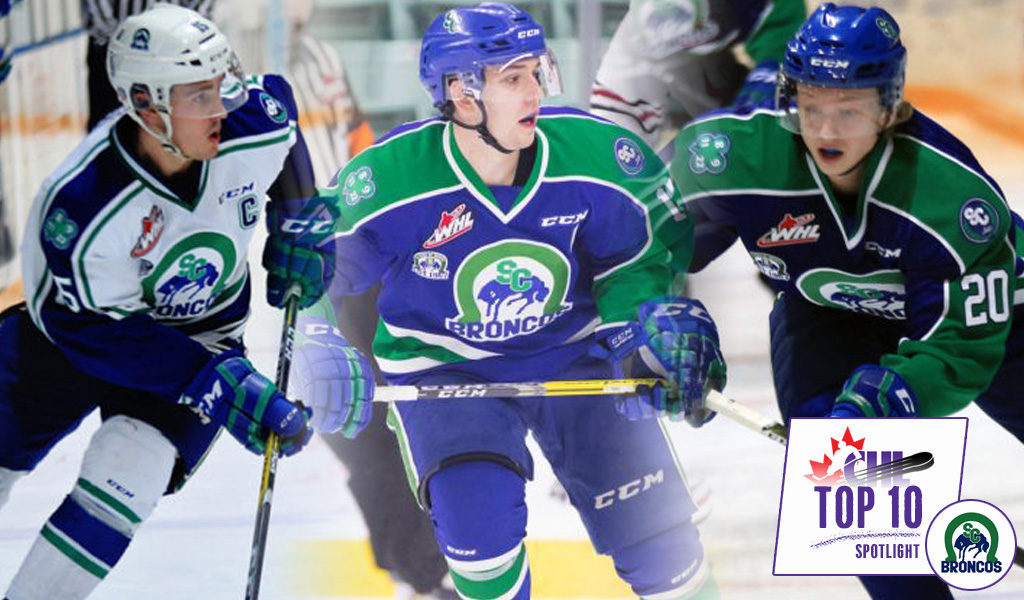 The Canadian Hockey League has seen some elite three-man units in recent years, and the Swift Current Broncos trio of Tyler Steenbergen, Aleksi Heponiemi and Glenn Gawdin is finding its way into those ranks.

Swift Current’s big three has produced 37 goals and 88 points over 11 games, accounting for over 70 percent of the club’s offence to this point in the season while helping produce the WHL’s third-ranked power play.

An Arizona Coyotes prospect, Steenbergen leads the league with 33 points (21-12–33) while Florida Panthers draftee Heponiemi trails close behind with 30 (8-22–30).

“I don’t know what to say anymore,” said Broncos head coach Manny Viveiros following a 6-4 win over the Lethbridge Hurricanes on Saturday that saw Steenbergen, Heponiemi and Gawdin combine for 13 points. “They’re really good out there right now offensively. I’ve got to stress even more so these guys defensively they’re responsible.

“They don’t spend a lot of time in the d-zone because they’re committed to playing a good 200-foot game.”

Steenbergen, who will represent Team WHL in the upcoming CIBC Canada Russia Series, recorded his third four-goal game of the season in the victory that came a night before the Broncos dropped a 5-4 overtime decision in Kootenay. Despite the setback they still hold the WHL’s best winning percentage with a record of 9-1-1-0.

“It’s a long road, it’s a gruelling schedule, 72 games, and you never know what happens with injuries and who teams pick up,” Steenbergen told Sportsnet’s Neate Sager last week. “We want to win as much as we can and we have the guys to do it. I know some teams take us for granted, being from a smaller market, but we want to be at the Memorial Cup in Regina.”

With a population hovering around 16,000, Swift Current is among the smallest cities in the Canadian Hockey League, but that hasn’t stopped the fans from coming out in droves to support the highly successful hometown team.

The community rallied around the club during a memorable playoff drive last spring that saw the Broncos win a playoff round for the first time since 2008. They pushed the Regina Pats to Game 7 of the Eastern Conference Semi-Final before coming up short.

“Last year the crowds that came out in the playoffs were unbelievable,” Steenbergen told Sager. “It (the Credit Union iPlex) was probably the loudest rink I have ever been in. So far this year, the average attendance has been unbelievable. We haven’t had anything like it at the start of the year. That shows that the fans want us to win now and so does our team and we want to bring that to them.”

The Broncos have benefitted from the strong play of 19-year-old defenceman Colby Sissons who leads blueliners with 13 points (4-9–13) over 11 games. Big 6-foot-4, 220Ib. rearguard Sahvan Khaira and Russian product Artyom Minulin have also seen a large share of ice.

In goal, overage veteran Logan Flodell was last week’s Vaughn CHL Goaltender of the Week. The Regina, Sask. native has played to an 8-0-1-0 record with a 2.54 goals-against average, .924 save percentage and one shutout.

Additionally, rookie forward Logan Barlage, the club’s first round (4th overall) pick in the 2016 WHL Bantam Draft has tabbed to represent Canada at the 2017 World Under-17 Hockey Challenge that begins on November 5th in Dawson Creek and Fort St. John, BC.

A historic WHL franchise that won league titles in 1989 and 1993 along with a lone Mastercard Memorial Cup crown in 1989, the Broncos are looking to turn the corner this season after flirting with the 40-win mark in 2016-17.

The Broncos get back to work on home ice this weekend, playing host to the Saskatoon Blades (3-6-1-0) and Medicine Hat Tigers (6-4-0-0) on Friday and Saturday.