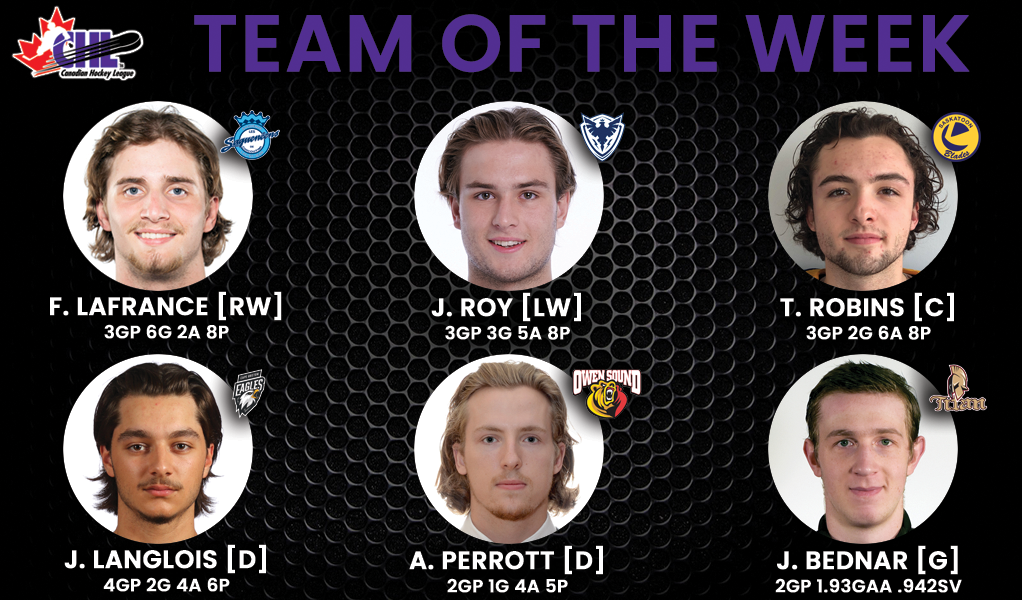 The Canadian Hockey League announced today the second edition of the CHL Team of the Week for the 2021-22 regular season based on individual performances from October 11-17.

Leading the forward ranks is Chicoutimi Sagueneens overage right-wing Felix Lafrance who through three appearances collected eight points counting six goals and two assists highlighted by his second career hat-trick coming Saturday against Sherbrooke in which he scored all three goals for the Sagueneens in the 5-3 final. For his efforts, the native of Saint-Eustache, Que., was recognized as the QMJHL Player of the Week.

Also up front is Sherbrooke Phoenix left-wing and Montreal Canadiens prospect Joshua Roy who wrapped up the week with three goals and five assists for eight points through a trio of contests. Roy’s top performance came in Friday’s 7-6 thriller versus Baie-Comeau in which he collected a season-high four points en route to first-star honours. Originally chosen atop the 2019 QMJHL Entry Draft, the 18-year-old native of Saint-Georges-de-Beauce, Que., has recorded at least one point in six of seven games this season and currently leads the league with 15 points.

Rounding out the forward group is Saskatoon Blades centre and San Jose Sharks draftee Tristen Robins who notched two goals and six assists for eight points through three appearances. With 13 points on the season, Robins currently leads the WHL in scoring, underscored by five total games in which he has finished with multiple points each night. A 19-year-old native of Clear Lake, Man., Robins’ top performance over the past week came in Wednesday’s overtime decision versus Brandon in which he collected one goal with two assists, helping him earn second-star honours and ultimately recognition as the WHL Player of the Week.

On the back end, Cape Breton Eagles defenceman Jeremy Langlois impressed in coming up with six points counting two goals and four assists through four appearances. Currently riding a six-game point streak, the budding blue-liner came up big Friday against Saint John as he picked up a first-period helper then found the back of the net himself in the middle frame in the eventual 5-4 shootout victory. An 18-year-old Quebec City native, Langlois is eligible for the 2022 NHL Draft.

Also on the blue line is Owen Sound Attack overage rearguard Andrew Perrott who dazzled in a pair of appearances as he registered five points counting one goal and four assists. Facing the Soo on Saturday, Perrott finished with a career single-game high of three points en route to first-star recognition. An Ohio native, Perrott currently leads the Attack in scoring with six points in four games.

In the blue paint, Acadie-Bathurst Titan netminder and Detroit Red Wings draftee Jan Bednar was dominant across two showings, coming away with victories versus Cape Breton and Charlottetown to help his squad remain undefeated in regulation this season. In all, the 19-year-old Czech native closed out the week with a 1.93 goals-against average and .942 save percentage, underscored by his 39-save effort versus the Islanders in which he was recognized as the second star of the game.