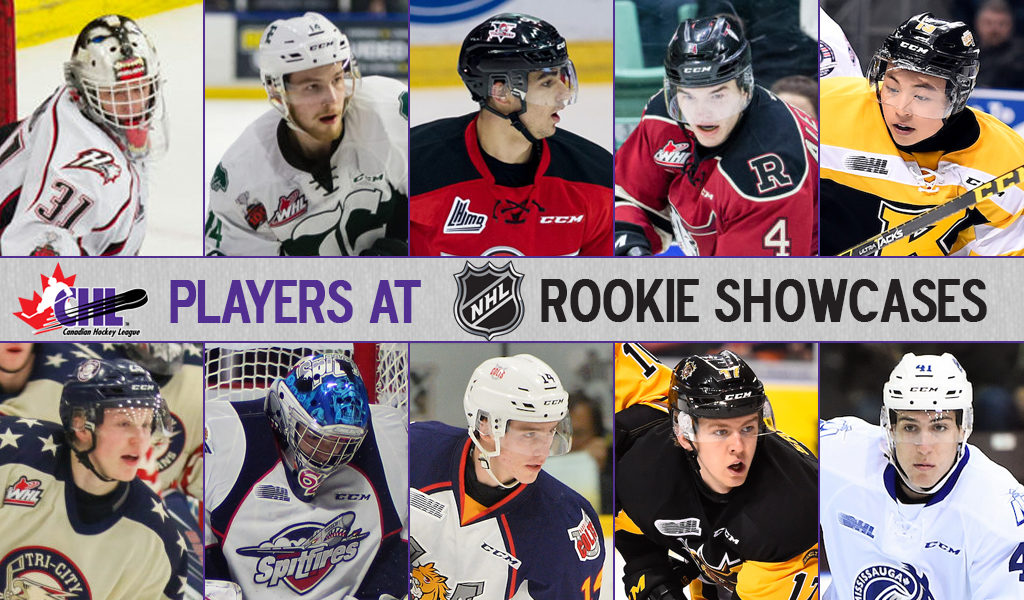 Past and present players from across the CHL recently attended NHL Rookie Camps, looking to make a good impression ahead of the 2018-19 season. Several teams competed in organized rookie tournaments.

Jason Robertson (Kingston Frontenacs) led the event in scoring with nine points (2-7–9) in four games, helping the Dallas Stars play to a 2-2 record. A native of nearby Northville, MI, Robertson’s impressive showing included a three-point (2-1–3) effort in a 5-4 loss to the Minnesota Wild and a four-assist performance in a 7-5 win over the New York Rangers. Other Dallas standouts included free agent invite Ben Gleason (Hamilton Bulldogs) and 2018 first round pick Ty Dellandrea (Flint Firebirds).

Miro Heiskanen was as advertised in Traverse City, but how did the rest of the guys fare at the NHL Prospect Tournament? @StarsInsideEdge lists the players who stood out. https://t.co/pFs1ewKbt5

The top CHL selection at the 2018 NHL Draft, Carolina Hurricanes forward Andrei Svechnikov (Barrie Colts) led his team in scoring with four points (2-2–4) in as many games.

The host Buffalo Sabres, Boston Bruins and New Jersey Devils came away with 2-1 records while the Pittsburgh Penguins went 0-3 at the 2018 HarborCenter Prospects Challenge in Buffalo, NY.

Get @Olson_19‘s thoughts about his hat trick and the rookie tourney in 60 seconds! pic.twitter.com/2XX08kESUd

The Colorado Avalanche rebounded from a pair of losses to defeat the San Jose Sharks 6-3 in their final game. Brandon Saigeon (Hamilton Bulldogs) scored in all three games for the Avs while Brandon Wheat Kings grad Ty Lewis and Matthew Boucher (Quebec Remparts) were also contributors. Saigeon scored twice in Colorado’s tournament-closing win.

Sherbrooke Phoenix graduate Mathieu Olivier scored twice to help the Nashville Predators lead-off the 2018 Prospects Tournament in Estero, Florida with a 5-4 win over the Washington Capitals. The Preds entered the third period down 3-2 but battled back to start the tournament on a winning note. Former Gatineau Olympiques standout Yakov Trenin also scored for Nashville.

Five points (3g, 2a) for 2018 draftee @sutts_14 and the third #ProspectShowcase for veteran prospect @chobbs15 – both share their thoughts about the tourney and the future #ALLCAPS pic.twitter.com/ue84qk9Ldx

Washington rebounded from an opening game loss in Game 3 of the tournament as they blanked Tampa Bay 5-0. Riley Sutter (Everett Silvertips), Beck Malenstyn (Swift Current Broncos) and Kody Clark (Ottawa 67’s) all scored for the Caps.

The Capitals finished off the showcase with a high-scoring 8-5 win over Nashville. Everett Silvertips teammates Garrett Pilon and Riley Sutter were in on each of Washington’s first three goals with Pilon scoring twice while Regina Pats grad Connor Hobbs also lit the lamp. Malenstyn, Clark and Eric Florchuk (Saskatoon Blades) also found the scoresheet.

Sutter led all players in the tournament with three goals while Caps defenceman Alexander Alexeyev (Red Deer Rebels) tied for the event lead with four assists.

The Vancouver Canucks and Winnipeg Jets played a pair of games in Penticton, BC, with the Canucks coming out on top in both matchups.

A pair of Owen Sound Attack products in Jonah Gadjovich and Petrus Palmu both scored twice in an opening 8-2 win for Vancouver while Windsor Spitfires netminder Michael DiPietro got the win in goal.

In the second game, London Knights graduate Olli Juolevi set up fellow Canucks first rounder Elias Pettersson for his third goal of the weekend while Swedish winger Jonathan Dahlen scored a pair in a 6-4 Vancouver triumph.

Shawinigan Cataractes grad Alex D’Aoust scored a goal for Winnipeg in the loss.

The Leafs finished with a 1-1 record as Semyon Der-Arguchintsev (Peterborough Petes), London Knights grad JJ Piccinich and former Regina Pats captain Adam Brooks found the back of the net in a 6-5 overtime loss to Ottawa.

Montreal finished with an 0-2 record, being blanked by Ottawa in the opener before Cole Fonstad (Prince Albert Raiders) and Blainville-Boisbriand Armada grad TJ Melancon scored in a 4-2 loss to Toronto. Will Bitten (Hamilton Bulldogs) had a goal and set up another.