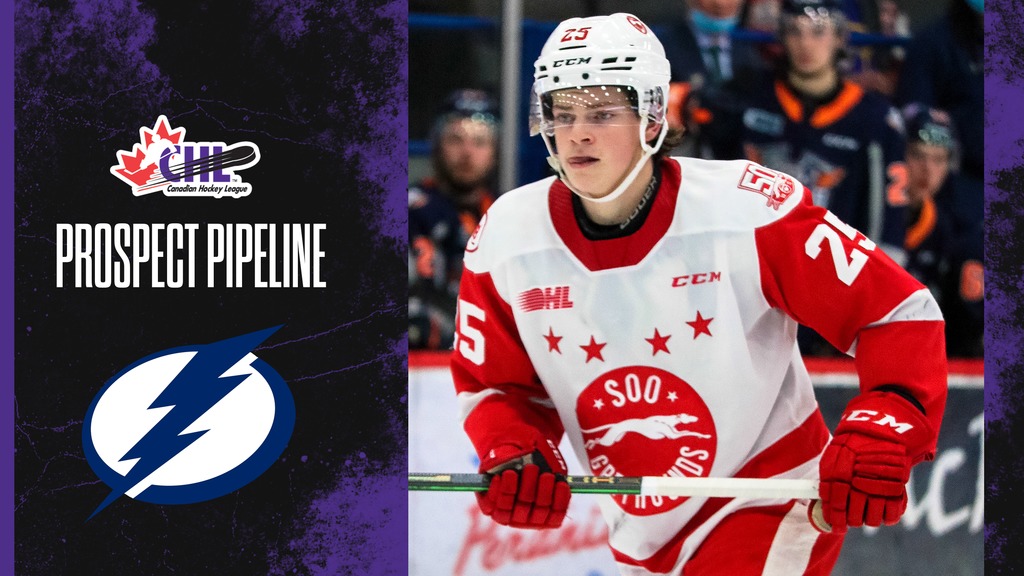 An industrious left-wing with intriguing offensive upside, Dureau put together a strong overage campaign with the Portland Winterhawks in 2021-22 that saw him finish fifth in team scoring with 66 points in only 49 outings. Hailing from White City, Sask., Dureau joined the Lightning following his fifth-round selection in the 2020 NHL Draft. He signed his entry-level deal with the club in May.

An offensive-minded overager, Edmonds dominated with the Kingston Frontenacs in 2021-22, leading the squad with 113 points to rank third best in OHL scoring. An all-out offensive star, that success saw Edmonds sign on with the Lightning as an undrafted free agent in July. A product of North Bay, Ont., the talented right-wing will join the AHL’s Syracuse Crunch next season.

Splitting last season between the Spokane Chiefs and Winnipeg ICE, the hulking centre proved to be an offensive force with both clubs, totaling 27 goals and 23 assists through 60 appearances. Hailing from Kelowna, B.C., Finley joined Canada Black at the 2018 World Under-17 Hockey Challenge. Finley was chosen by Tampa Bay in the second round of the 2020 NHL Draft, then signed his first contract with the club that December.

Making smart puck plays from the back end, the budding blue-liner showed flashes of his offensive game last season with the Rouyn-Noranda Huskies where through 66 appearances he tallied six goals with 15 assists. Originally chosen with the 20th overall selection in the 2020 QMJHL Entry Draft, Gill has spent two seasons with the Huskies, compiling 23 points in 105 games. An 18-year-old native of Riverview, N.B., Gill was chosen by Tampa Bay late in this summer’s NHL Draft.

Joining the Everett Silvertips following his second-overall selection in the 2021 CHL Import Draft, the Finnish right-wing made an immediate mark in his new home as he paced all WHL first years with 37 goals in 65 contests. A sizable forward, Huuhtanen haunts the opposition with his physical playing style and quick release. Huuhtanen, 19, was chosen by the Lightning in the seventh round of the 2021 NHL Draft.

A budding power forward with a quick release, the overage left-wing closed out his junior career in style with the Acadie-Bathurst Titan where through 54 appearances he posted a career high of 77 points. That performance helped the product of Summerside, P.E.I., to land with the Lightning as an undrafted free agent as he signed with the club in March.

Seeing a solid offensive uptick in his second season with the Saint John Sea Dogs, the talented left-wing impressed in posting 34 points in 67 appearances and was a key cog in helping the club raise the Memorial Cup at year end. An elusive scoring threat, MacDonald finds offensive success because of his willingness to go to the net. A 19-year-old native of Hammonds Plains, N.S., MacDonald was chosen by the Lightning in the fifth round of the 2021 NHL Draft.

A force from the back end, Schmidt uses his opposing size to clear the crease and shutdown the opposition. Joining the Kitchener Rangers last season, the 19-year-old Michigan product also showed intriguing offensive upside as he posted 11 goals and 22 assists in 68 outings. A 2021 third-round selection by Tampa Bay Lightning, Schmidt signed his entry-level contract with the Lightning that December.

Splitting last season between the Sudbury Wolves and Soo Greyhounds, Thompson is a smooth-skating blue-liner who brings a solid two-way game. In all, the 2021-22 campaign saw him make 65 appearances in which he combined for 21 goals – the most among all OHL rearguards – and 36 assists before adding another 14 points in nine playoff outings. For his efforts, Thompson was recognized as part of the OHL Second All-Star Team. A 20-year-old native of Courtice, Ont., Thompson has been a frequent participant on the national stage, including a showing with Team Canada at the summer World Juniors. A 2020 third-round selection by Tampa Bay, Thompson signed his first contract with the club last May.