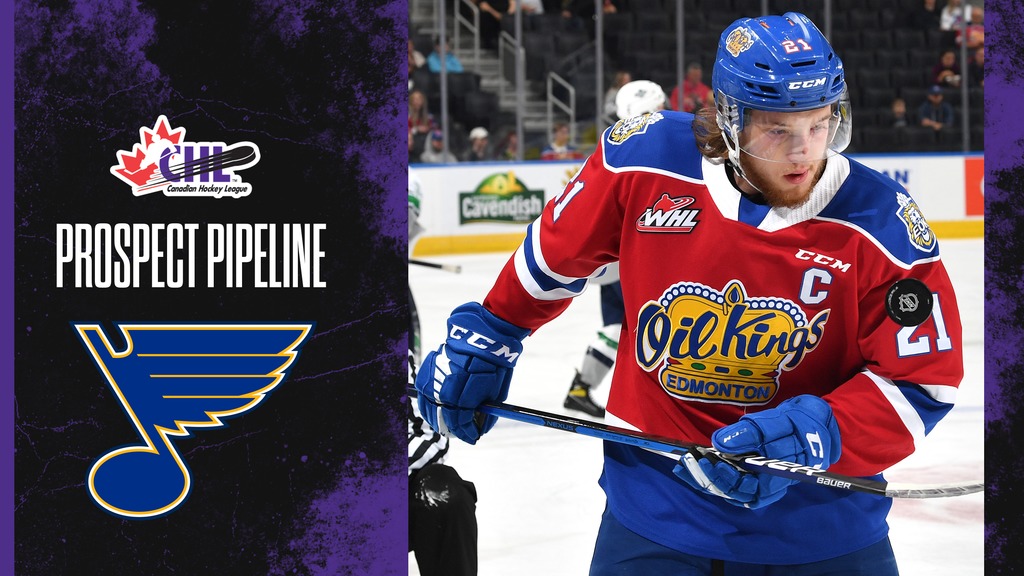 A two-way specialist who is equally adept at setting up his linemates as he is at finding the back of the net himself, the Quebec Remparts left-wing delivered offensively last season where through 65 appearances he finished tied for top spot in team scoring with 99 points and was named to the QMJHL Second All-Star Team. A 19-year-old native from Trois-Rivieres, Que., Bolduc has also enjoyed success on the national stage highlighted by a five-game showing with Canada Red at the 2019 World Under-17 Hockey Challenge that saw him put up two goals and three assists. Bolduc was chosen 17th overall by the Blues in the 2021 NHL Draft.

A consistent, two-way defender, Buchinger brings speed and mobility to the back end that allows him to find the scoresheet with regularity as shown through 63 appearances with the Guelph Storm last season where he led all rearguards with 44 points. In recognition of his strong play, the 18-year-old native of Markham, Ont., was named to the OHL First All-Rookie Team. Buchinger was selected by the Blues in the third round of this summer’s NHL Draft.

A hulking presence between the pipes, the Ottawa 67’s netminder took command of the starting duties last season. In all, through his 41 appearances, Cranley came up with 13 victories alongside a 3.81 goals-against average and .873 save percentage. A 20-year-old product of Peterborough, Ont., the budding goaltender was a part of Canada Red at the 2018 World Under-17 Hockey Challenge. A 2020 sixth-round selection the Blues, Cranley signed his entry-level contract with the club in March. The coming campaign will see Cranley shift to the Flint Firebirds.

Using his speed to create offensive chances – most notably on the man advantage – the Soo Greyhounds centre is a solid secondary scoring option where despite being limited to 35 appearances last season he manufactured 18 goals with 29 assists. A 20-year-old hailing from Ohio, Dickinson was chosen by the Blues in the fourth round of the 2020 NHL Draft, then signed his first contract with the club last August.

A modern puck carrier who excels on the rush and in transition, the Calgary Hitmen rearguard brings size and a scoring touch to the back end. Making 66 appearances last season, Galloway provided modest production with 23 points counting five goals and 18 assists. A 19-year-old native of Kamloops, B.C., Galloway joined the Blues following his 145th overall selection in the 2021 class.

Bringing ideal size on the back end, what truly separates Gaudet is his booming shot, which through 68 contests with the Acadie-Bathurst Titan last season saw him light the lamp 13 times while adding 25 assists. That drew the attention of talent evaluators in St. Louis as the Blues called upon Gaudet in the fifth round of this summer’s NHL Draft. An 18-year-old native of Saint-Ignace, N.B., Gaudet will join the Chicoutimi Sagueneens for the coming campaign.

A natural leader, Neighbours is a high-motor left-wing who can play in all areas of the game. Assuming the captaincy last season with the Edmonton Oil Kings, Neighbours backed up his play on the scoresheet as he racked up 17 goals and 28 assists through 30 appearances before adding another 17 points in 19 playoff outings to help the Oil Kings claim the Ed Chynoweth Cup. A 2020 first-round selection by the Blues, Neighbours began last season in the pros, seeing a nine-game trial run with St. Louis in which he recorded his first-ever NHL goal plus one assist. Selected fourth overall in the 2017 WHL Draft, Neighbours’ time in the junior circuit has seen him collect 176 points in 171 career contests. A 20-year-old native from Airdrie, Alta., Neighbours has also joined the Canadian national program on several occasions highlighted by a five-game showing with Canada White at the 2018 World Under-17 Hockey Challenge where as captain he chipped in with six points.

A creative playmaker, the talented left-wing joined the London Knights for the 2021-22 campaign and showed signs of offensive upside as he posted 21 points across 64 appearances. An 18-year-old native of New Glasgow, N.S., the Blues called upon Sim in the sixth round of this summer’s NHL Draft.