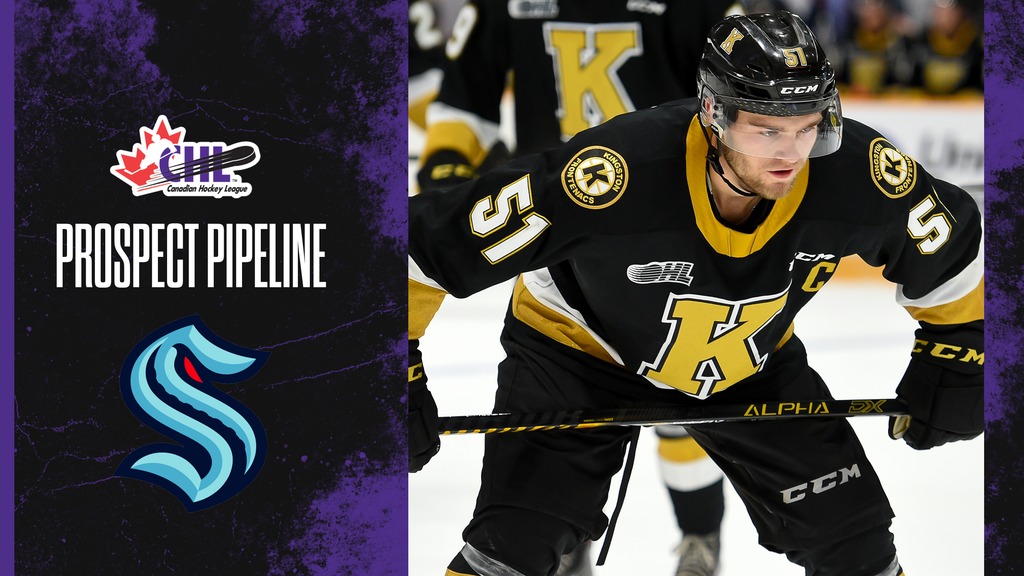 A solid all-around defenceman, Evans excels at both closing gaps and exiting the zone. Reaching new offensive heights with the Regina Pats last season, the overage rearguard approach point-per-game production as he finished third in team scoring with 14 goals and 47 assists through 63 appearances. By year’s end, the Calgary native was recognized as part of the WHL’s Eastern Conference Second All-Star Team. A 2021 second-round selection by Seattle, Evans signed his entry-level contract with the club in April.

Bringing exceptional vision and soft hands, Firkus unleashes his quick release to beat opposing netminders. Through 66 appearances with the Moose Jaw Warriors in 2021-22, the gifted centre led the squad with 36 goals and 80 points. In recognition, Firkus was later named to the WHL’s Eastern Conference Second All-Star Team. An 18-year-old native of Irma, Alta., Firkus was chosen by the Kraken with the 35th overall pick in this summer’s NHL Draft.

An offensive-minded centre, Goyette uses his incredible vision to find scoring opportunities, and did so last season with the Sudbury Wolves when he paced all OHL rookie forwards with 73 points through 66 appearances. A 2004-born native of Hawkesbury, Ont., Goyette then took to the national stage at year end in joining Canada at the 2022 Under-18 World Championship. Chosen 11th overall in the 2020 OHL Priority Selection, the talented centre once again heard his name called early on draft day when Seattle selected him midway through the second round of the NHL Draft this summer.

Playing with a willingness to put himself in scoring positions, the North Bay Battalion centre was rewarded for his efforts in 2021-22 when he finished with a career high of 62 points coming in 45 outings. Jackson then continued his offensive dominance in the postseason when he added another 14 points in a dozen appearances. The 19-year-old Ottawa native was chosen by Seattle late in this summer’s NHL Draft.

Putting together a dominant overage season, the Soo Greyhounds left winger drew the attention of talent evaluators as he ultimately signed on with the Kraken as an undrafted free agent in March. In all, the season saw the Kingston, Ont., native make 63 appearances in which he finished with a career high of 79 points to rank second in team scoring and earn a spot on the OHL Third All-Star Team.

Playing with a desirable physical edge, the Acadie-Bathurst Titan right-wing uses his solid frame to his advantage to create scoring opportunities. That was evident last season where through 54 appearances he scored north of a point per game in coming up with 35 goals plus 21 assists. Hailing from Amherst, N.S., the budding 19-year-old was chosen by the Kraken in the fifth round of the 2021 NHL Draft, then signed his first contract with the club this July.

A high-energy defenceman who uses his imposing stature to play a power game, Nelson backed it up offensively last season with the North Bay Battalion where following his first-overall selection in the 2020 OHL Priority Selection he impressed with 51 points in 66 outings. In all, Nelson led all North Bay rearguards in scoring and was named to the OHL Second All-Rookie Team. An 18-year-old Toronto native, Nelson heard his name called by the Kraken in the third round of this summer’s NHL Draft.

A tenacious centre with a willingness to go to the net, Robertson was rewarded on the scoresheet last season where in his sophomore campaign with the Peterborough Petes he finished second in team scoring with 81 points through 68 appearances. That was enough to draw the attention of the scouting community as the 19-year-old Toronto native was chosen by the Kraken in the fourth round of the 2022 NHL Draft.

Limited to 37 games last season due to injury, Winterton made the most of it as he racked up 46 points plus another seven goals and 12 assists in the postseason, offering key scoring support to help the Hamilton Bulldogs hoist the J. Ross Robertson Cup. Originally chosen eighth overall in the 2019 OHL Priority Selection, the 18-year-old Whitby, Ont., native has also enjoyed success on the national stage, helping Canada to a gold-medal win at the 2021 Under-18 World Championship that saw him post four points in seven outings. Hearing his name called 67th overall by the Kraken in the 2021 NHL Draft, the talented right-wing landed his entry-level contract with the club in July.

The sixth player to be granted early admission into the CHL, the exceptional centre spent two seasons with the Kingston Frontenacs, beginning with the 2019-20 campaign where through 58 appearances the then 15-year-old dominated with 66 points in 58 outings, surpassing the franchise’s mark for the most goals by a rookie while also topping the point-per-game production of fellow exceptional talent Connor McDavid and challenging the numbers put up by John Tavares. For his efforts, Wright was recognized as the CHL Rookie of the Year. Not yet finished, Wright’s second season saw him rank eighth in OHL scoring with 94 points in 63 contests before ultimately being chosen by the Kraken fourth overall in this summer’s NHL Draft. An 18-year-old native of Burlington, Ont., Wright has also enjoyed much success on the national stage including a gold-medal win with Canada at the 2021 Under-18 World Championship in which he led the way with 14 points in only five outings. Signing his entry-level agreement with the Kraken in July, Wright is expected to begin his pro career in 2022-23.