CHL on TSN | 3 Reasons to Watch – Wolves vs. Frontenacs

chl on tsn
by
Casey Dulson 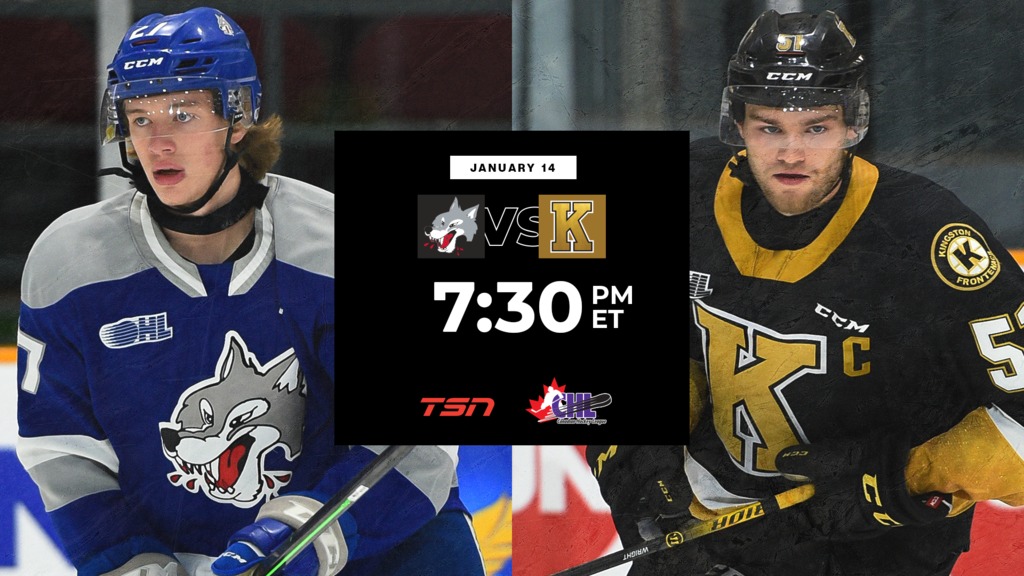 Beginning Friday, TSN is set to launch its new CHL broadcast schedule to a national audience as part of a double-header. The first of the two contests is a dandy as Shane Wright, the No. 1 prospect for the 2022 NHL Draft, and his Kingston Frontenacs host the Sudbury Wolves.

For Sudbury, the squad heads to Kingston a night after beating Peterborough in a 3-1 final, while the Frontenacs have not played in a week since falling 6-5 versus the Petes. Kingston enters Friday’s contest fourth in the OHL Eastern Conference with a record of 17-6-3-0 and having won eight of their last 10 games, while the new-look Wolves sit ninth in the East with 21 points.

Here are three reasons to tune into this OHL showdown on TSN:

All eyes on the exceptional Wright

NHL Central Scouting released its midterm rankings Wednesday and, to nobody’s surprise, the top-rated player is Kingston’s captain Shane Wright. Described by many scouts as a generational talent, Wright brings dynamic offensive skill mixed with solid two-way abilities, helping him to draw a comparison to CHL graduate Patrice Bergeron of the Boston Bruins. For Wright, being seen as the No. 1 player is nothing out of the ordinary as at 15 years old he was granted “exceptional player” status by the OHL, becoming only the fifth player to do so and joining the likes of NHL superstars in John Tavares, Aaron Ekblad, and Connor McDavid. This season, the 18-year-old native of Burlington, Ont., has found the back of the net 11 times along with 19 assists in 22 games. He was also a member of Team Canada at the abbreviated World Juniors, while his last OHL appearance came December 5 when he put up a pair of points in a 5-1 win over Ottawa.

Might have to start calling this wrister the "Wright-Rocket" 🚀

You'll want to see how the top 2022 #NHLDraft prospect opened the scoring for the @KingstonFronts 🎥 pic.twitter.com/hku46cHoFR

No OHL netminder has seen more pucks this season than Sudbury’s Mitchell Weeks, who leads the league in saves (780) and shots against (866). Originally chosen first overall by the Wolves in the 2018 U18 Priority Selection, the product of Barrie, Ont., has found the win column nine times this season while coming away with a .901 save percentage and 3.70 goals-against average. Meanwhile, at the other end of the rink is Kingston’s Leevi Merilainen, who ranks third-best in the OHL with 14 wins. A 2020 third-round selection of the Ottawa Senators, the budding Finnish netminder joined the Frontenacs after being taken in the opening round of the 2021 CHL Import Draft. In his first season in North America, Merilainen has impressed in coming away with a 14-5-3-0 record with an .892 save percentage and 3.32 goals-against average.

With fans in Sudbury looking toward the future, there is plenty of reason for optimism when it comes to the development of a trio of 2020 OHL draft picks, highlighted by the 11th overall selection, David Goyette. The 17-year-old Hawkesbury, Ont., native was the highest-ranked Sudbury skater in the NHL’s midterm ranking, coming in at 35th. This season, the talented centre has tallied seven goals with 16 assists in 29 games. Meanwhile, joining Goyette on the NHL’s midterm rankings is 17-year-old Pennsylvania product Evan Konyen, a fourth rounder from the 2020 OHL Priority Selection. The American-born right-wing ranks 88th at the midterms after collecting six goals and 15 assists for 21 points in 30 games this season. Lastly, Sudbury also saw recognition for 17-year-old Mississauga, Ont., native Kocha Delic. Joining the Wolves after being chosen in the second round of the 2020 OHL Priority Selection, Delic clocked in at 200th per NHL Central Scouting. In 2021-22, the rookie centre has scored nine times while adding seven assists through 30 appearances. For Sudbury, all three players offer up plenty of promise and no shortage of hope for brighter days ahead.

Rookie with his first #OHL hat-trick in a lopsided @Sudbury_Wolves win 🎩🎩🎩 pic.twitter.com/QRI8k2lvAy