CHL on TSN | 3 Reasons to Watch – Cougars vs. Giants

chl on tsn
by
Casey Dulson 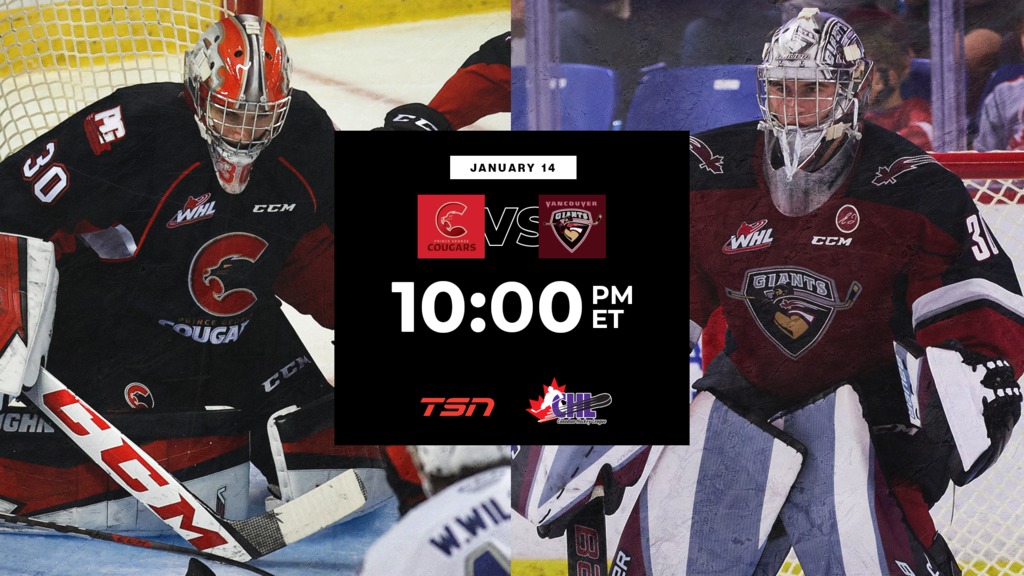 The Vancouver Giants host the Prince George Cougars on national television Friday as the second half of a CHL on TSN doubleheader.

Both teams are coming off a long layoff. The Cougars have not played in 12 days, while it has been an 11-day wait for the Giants. The two British Colombia teams are neck-and-neck in the WHL standings, with the Giants sitting sixth in the Western Conference with a record of 15-16-0-1, three points up on the Cougars. Friday’s tilt is the eighth time that the two teams have met this season, with Vancouver having won four to date.

To get you ready for the latest showdown, here are three reasons why Friday night is must-see TV:

The NHL Central Scouting’s Midterm Rankings released Wednesday and Tyler Brennan found himself ranked No. 1 among North American goaltenders. Throughout his career with the Cougars, the 18-year-old Winnipeg native had played second fiddle to Taylor Gauthier, but with the recent move of Gauthier to Portland, the Cougars are now Brennan’s team. In all, Brennan has made 17 appearances this year, posting a record of 5-11-0-1 with an .895 save percentage and 3.55 goals-against average. He also has two shutouts, putting him third-best in the WHL. The scouting community notes Brennan for his size in the blue paint and, as indicated by Giants captain Justin Sourdif, the best chance to beat him will be by creating a screen and getting plenty of pucks on net.

We've seen some nice saves at the CN Centre this week, here's another from Tyler Brennan of the @PGCougars!@RealCdnSS | #SaveoftheNight pic.twitter.com/JAeMmwxV2F

Added in August, 19-year-old Ty Thorpe has worked in the Giants’ favour as the product of Brandon, Man., has rewarded his new squad with 10 goals and 20 assists in 29 games this season, already marking a new career high of 30 points. Thorpe’s previous high was during the 2019-20 season when he found the back of the net six times along with 12 assists in 60 games. Up front, Thorpe forms part of a dynamic offensive group for Vancouver that also includes Florida Panthers draftee Justin Sourdif as well as Boston Bruins first-round pick Fabian Lysell, among others.

The Cougars enter Friday’s tilt led by their strong defence core that is highlighted by Viliam Kmec, Keaton Dowhaniuk, and Hudson Thornton, all of whom earned recognition in NHL Central Scouting’s Midterm Rankings. An 18-year-old Slovak native, Kmec was the highest Cougar on the list, coming in at No. 92. He recently returned to the squad after competing for his home nation at the World Juniors. This season, Kmec has recorded two goals and 11 assists in 27 games. Meanwhile, Dowhaniuk, a 17-year-old native of Sherwood Park, Alta., slotted 136th among North Americans in the midterms. The third-overall selection from the 2019 WHL Draft, this season Dowhaniuk has notched eight assists in 30 games. Lastly, Thornton has shined in his first full season with the club, tallying seven goals and 13 assists. The Winnipeg native projects as a late-round selection in the upcoming NHL Draft per Central Scouting. Bringing a physical edge, Thornton is a challenging competitor who will bring his all Friday against Vancouver.

When you think of first-year WHL defencemen finding their stride…