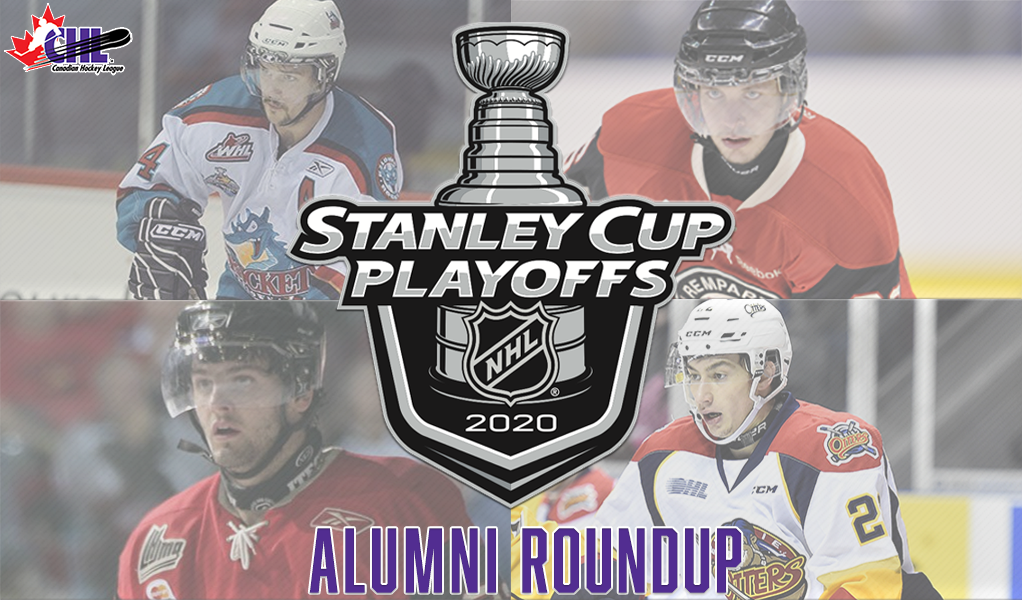 Former stars from across the Canadian Hockey League continued to shine during the Conference Finals of the Stanley Cup Playoffs with a total of 74 alumni competing among the final four teams.

The Dallas Stars and Tampa Bay Lightning emerged victorious from the West and East and will begin 2020’s final post-season chapter on Saturday.

Before the next round begins, here’s a look back at some of the latest highlights:

One of the most feel-good stories so far is success for Stars head coach Rick Bowness (Quebec Remparts) who reaches the finals after more than 2,500 combined games behind NHL benches. Dallas was also led by captain Jamie Benn (Kelowna Rockets) who had three goals and two assists over five games against Vegas, and Alexander Radulov (Quebec Remparts) who had three points including an OT winner in Game 3. Between-the-pipes Anton Khudobin (Saskatoon Blades) has been lights out making 153 saves over his last five games.

Rick Bowness of the @DallasStars has reached the #StanleyCup Final after 536 career games as an NHL head coach (500 regular season, 36 playoffs) and after more than 2,500 combined games behind an NHL bench in any role.#NHLStats: https://t.co/JskR46hKmJ pic.twitter.com/zCDbltGsLz

Anton Khudobin improved to 12-6 in 19 appearances this postseason (2.62 GAA, .920 SV%, 1 SO), including wins in each of the @DallasStars’ last three games to close out the series.#NHLStats: https://t.co/aSfcagwVEr #StanleyCup pic.twitter.com/fvhmK7vCSu

The Lightning advance following overtime heroics from Anthony Cirelli who has a history for big game dramatics. He previously scored the extra frame winner for the Erie Otters to capture the 2017 OHL Championship plus the OT goal for the Oshawa Generals to win the 2015 Memorial Cup. Nikita Kucherov (Rouyn-Noranda Huskies) now leads all playoff scorers with a franchise record 26 points after tallying two goals and eight assists against the Islanders. He and Brayden Point (Moose Jaw Warriors) also set team records with five-point performances to open the series.

Anthony Cirelli scored at 13:18 of overtime to power the @TBLightning to the #StanleyCup Final for the third time in franchise history (also 2004 & 2015). #NHLStats pic.twitter.com/TRkKb1OQFJ

DYK? @BraydenPoint19 and @86Kucherov are the second set of teammates to each have 5+ points in a Conference Finals game (since 1982).

New York’s Cinderella run closes for 19 CHL grads however several had standout performances along the way. Jordan Eberle (Regina Pats) had two goals and one assist in third round play including an OT winner to keep hopes alive in Game 5. Josh Bailey (Windsor Spitfires) led the team in playoff scoring up front with 20 points, while Ryan Pulock (Brandon Wheat Kings) was first among defencemen with 10 points.

Jordan Eberle scored with 7:30 remaining into double overtime to help the @NYIslanders stave off elimination and force a Game 6 in the Eastern Conference Final. #StanleyCup
#NHLStats: https://t.co/xtr6I6DJcQ pic.twitter.com/av7ckpT4r5

20 CHL grads on Vegas had their playoff dreams destroyed during the Conference Finals but performed admirably until the bitter end. Defenceman Shea Theodore (Seattle Thunderbirds) led the team in scoring with 19 playoff points including three against Dallas. Mark Stone (Brandon Wheat Kings) was second in team scoring with 17 points. In goal, Robin Lehner (Soo Greyhounds) had a league-leading four shutouts through three rounds.

DYK? Four of @sheatheodore's goals this postseason have been go-ahead or game-tying. Only 11 different defensemen in NHL history have scored 5+ goals in a playoff year that either gave their team the lead or tied a contest. #StanleyCup

DYK? @RobinLehner of the @GoldenKnights is the only goaltender in NHL history to earn a shutout in four or more consecutive wins during one playoff year.#NHLStats: https://t.co/hnELp72nyv #StanleyCup pic.twitter.com/RqH9Xz3rcU

35 CHL grads continue their Stanley Cup quest with 16 alumni on Dallas and 19 on Tampa Bay.