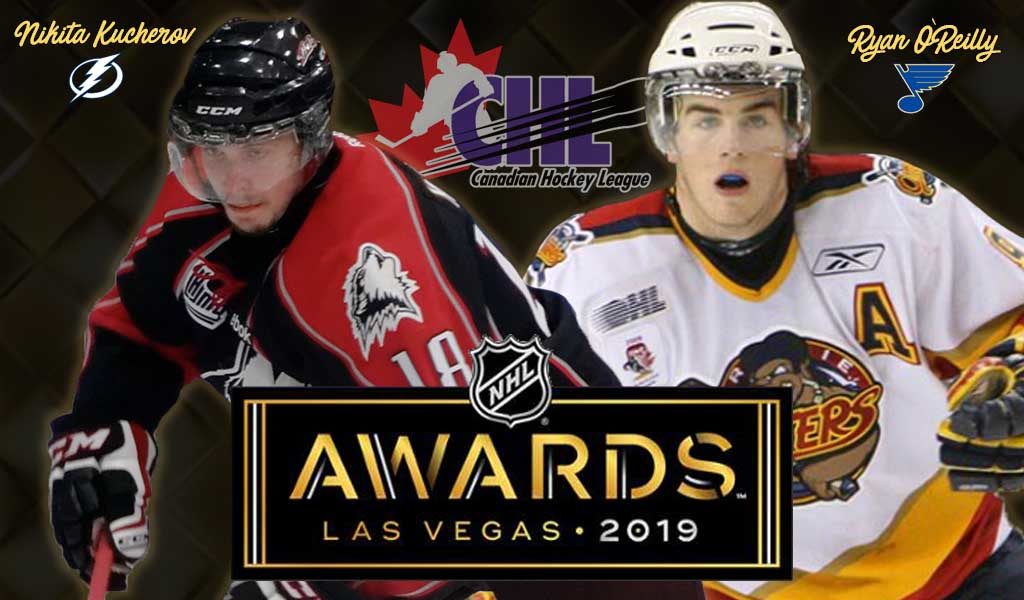 Six alumni of the Canadian Hockey League were named award recipients on Wednesday at the 2019 NHL Awards in Las Vegas, Nev.

Leading the way was former Rouyn-Noranda Huskies forward Nikita Kucherov of the Tampa Bay Lightning, who walked away with a mantel full of trophies after he claimed the Hart Trophy as the NHL MVP, the Ted Lindsay Award as the player judged most outstanding by the NHLPA, as well as the Art Ross Trophy as the NHL’s leading scorer after he notched 41 goals and 87 assists for 128 points – the most ever by a Russian-born player – during the 2018-19 campaign. That performance helped the Lightning capture the Presidents’ Trophy following a 128-point season, including 62 wins to tie the all-time single-season NHL high-water mark.

“It’s a huge night for me and my family,” Kucherov said. “Thanks to my teammates, my coaches, all the trainers, everybody involved in the team. Thanks to them for helping me get here. Without them, without all the work we’ve done together, I wouldn’t be here. A big part of this success just goes to all of them. Thanks to my boys, and I’m looking forward to next year.”

It’s official! @86Kucherov is the @NHL MVP of the 2018-19 season! The man who used to wear the @HuskiesRn colors becomes the first #QMJHL alumnus to win the Hart Trophy since Sidney Crosby in 2014! #NHLAwards #QMJHLPride pic.twitter.com/Tf4zdp9DR1

Meanwhile, a pair of former Sault Ste. Marie Greyhounds took to the stage Wednesday, beginning with netminder Robin Lehner, who was presented with the Bill Masterton Memorial Trophy in recognition of his perseverance, sportsmanship, and dedication to hockey.

The award comes after the Swedish goaltender publicly revealed his battle with mental health earlier this season, while Lehner offered up an inspiring speech when presented with the trophy on Wednesday.

“It represents so much personally to both me and my wife, my family,” Lehner said. “I’ve had such an incredible outpour of support and so many people that have contacted me, tried to contact me that I still haven’t been able to get to yet, that are just scared to take that first step, scared of doing the things necessary to turn their lives around. That’s incredibly rewarding.”

On the ice, Lehner had a career season, posting a 25-13-5 record alongside a .930 save percentage, 2.13 goals-against average, and six shutouts. That performance – coupled with the strong play of backup netminder Thomas Greiss – also saw Lehner presented with the William M. Jennings Trophy as the netminders to have allowed the fewest goals against during the 2018-19 season.

Also on Wednesday, another former Greyhound in Wayne Simmonds of the Nashville Predators was honoured with the Mark Messier NHL Leadership Award, presented to the player who best demonstrates leadership qualities on and off the ice, including a leading role in the community to grow the game of hockey.

Prior to his trade to the Predators, Simmonds was a fixture in the Philadelphia community and heavily involved with the Ed Snider Youth Hockey Foundation, with which he served as a board member, a role that saw him engaging with students and young hockey players at community rinks.

Simmonds’ charitable endeavours also included his work with the planning committee of the Willie O’Ree Skills Weekend as well as hosting different military units in a private suite for more than 20 home games in Philadelphia this season. On the ice, the Scarborough, Ont., native wrapped up the 2018-19 season with 17 goals and 13 assists for 30 points in 79 appearances.

On the back end, former Owen Sound Attack blue-liner Mark Giordano claimed the James Norris Trophy as the NHL’s Defencemen of the Year after he finished second among all rearguards with a career-high 74 points, counting 17 goals and 57 assists. He also topped the charts with a plus-39 rating. That performance by the Flames captain helped power Calgary to a 107-point season – the franchise’s best showing since 1988-89 – and top spot in the Western Conference.

Giordano becomes just the fourth player to capture the James Norris Trophy after his 35th birthday, following in the footsteps of Nicklas Lidstrom, Doug Harvey, and former Kitchener Rangers blue-liner Al MacInnis. He is also the first member in Flames’ franchise history to be honoured with the award.

“I take a lot of pride working out off the ice, keeping myself in good shape. But still, it’s not easy to play late into your 30s,” Giordano said. “We’re all aware of that as players, trying to last as long as you can. To be recognized at my age with this award is a moment that’s really special for me and my family.”

Behind the bench, Islanders head coach Barry Trotz became a two-time recipient of NHL Coach of the Year honours after he was presented with the Jack Adams Trophy.

This season, the longtime bench boss coached the Islanders to a 23-point improvement that saw the club finish second in the Metropolitan Division with a 48-27-7 record and 103 points, doing so in his first year with the team after he guided the Washington Capitals to a Stanley Cup championship last spring. This season, the Islanders became a defensively sound squad as they led the league in allowing just 196 goals against, marking a 100-goal improvement from the prior year.

“To me, this one feels different than (last time),” said Trotz, who won the Jack Adams Trophy in 2015-16 while with the Capitals. “This one has a lot more to it. Just because of the group we had and the expectations were not really good. We got in late and I didn’t know what I was getting into from a standpoint of personnel, but I had a lot of trust in (general manager) Lou Lamoriello.”

A native of Clinton, Ont., O’Reilly led the NHL in face-off wins for the second year running, counting 1,086 victories in the dot. Offensively, he topped the Blues with a career-high 77 points, counting 28 goals and 49 assists, doing so in his first season with St. Louis following a trade from the Buffalo Sabres last summer. In all, he became the first member of the Blues to take home the Frank J. Selke Trophy in 29 years.

“It’s obviously a huge honour,” O’Reilly said. “Seeing the names that are on that are guys I’ve always admired, and to be one of them and to be on that, it’s amazing. It’s a great cap off to that amazing week. Yeah, it’s crazy. It’s great. I’m just kind of overwhelmed with everything that’s been going on. But it is an honour to be on that because it’s guys that I wanted to be.”

It was a banner year for O’Reilly, who also guided the Blues to a franchise-first Stanley Cup after defeating the Boston Bruins in seven games. As part of the celebration, O’Reilly was presented with the Conn Smythe Trophy after he led the Blues in playoff scoring with 23 points in 26 games, a stretch which included at least one goal in the last four games of the 2019 Stanley Cup Final.