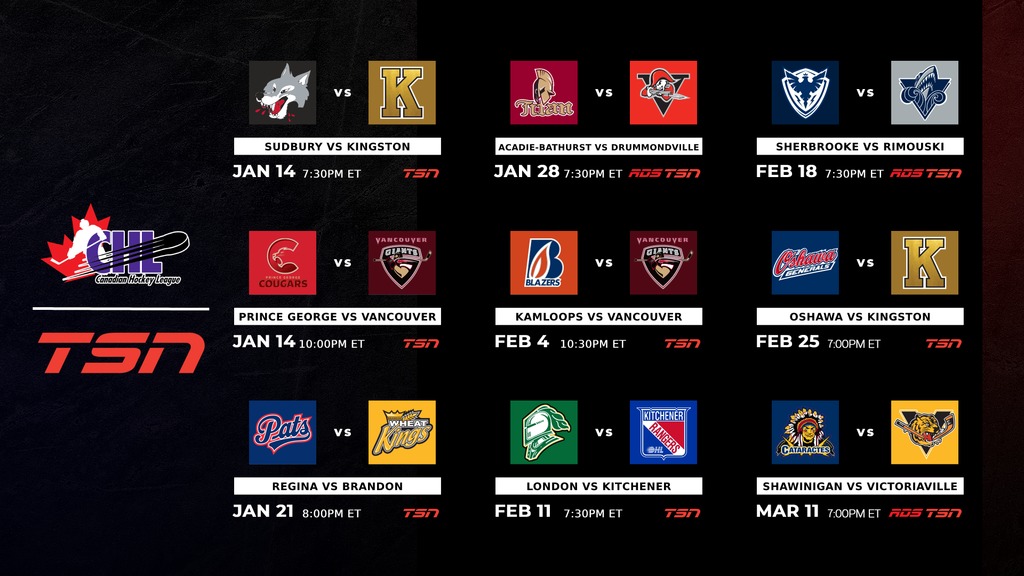 The Canadian Hockey League announced today that 10 games from the 2021-22 regular season schedule will be televised by TSN as part of the CHL’s new multi-platform, multi-year broadcast rights partnership.

“We are very excited to be launching the CHL on TSN in January which will tie very nicely to their coverage of our CHL talent at the World Juniors,” said CHL President Dan MacKenzie. “For many communities in the CHL, Friday nights at the rink are a tradition and we couldn’t be happier that TSN is honouring that tradition by focusing their regular season coverage on Friday nights.”

The broadcast schedule begins with a double-header set for Friday, January 14:

Among the highlights, the CHL on TSN schedule is highlighted by Kingston Frontenacs centre Shane Wright under the spotlight twice ahead of his projected first-overall selection in the upcoming NHL Draft, while other must-see moments include the Regina Pats and 2023 NHL Draft favourite Connor Bedard facing off against the Brandon Wheat Kings on January 21 at 8 p.m. ET and a showdown between the Shawinigan Cataractes and the QMJHL’s defending President Cup champion Victoriaville Tigres to close out the regular season broadcast schedule. All games are also available for live streaming via TSN.ca and the TSN App.

“We’re thrilled to showcase the many emerging talents competing in the CHL,” said Paul Graham, Executive Producer, TSN. “Our partnership with the CHL provides Canadians across the country a chance to cheer on the next generation of hockey’s elite. We’re very excited for puck drop on TSN and RDS.”

As the official broadcast partner of the Canadian Hockey League, TSN is home for CHL national events including the 2022 Kubota CHL/NHL Top Prospects Game on Feb. 2, 2022 at 7 p.m. ET on TSN and RDS, live from Kitchener, Ont., as well as select playoff coverage, and the 2022 Memorial Cup presented by Kia hosted by the Saint John Sea Dogs in June 2022.