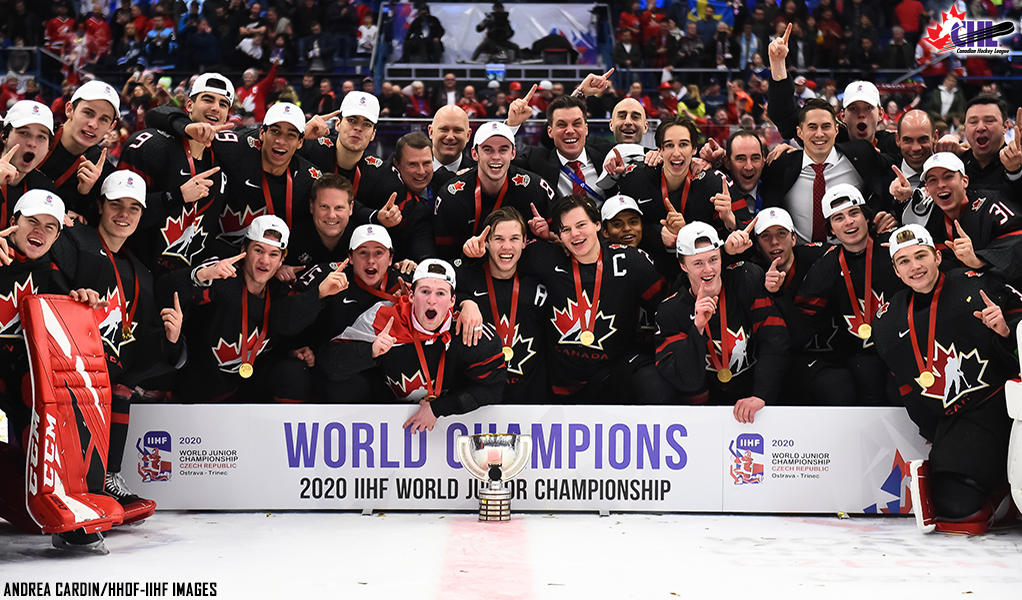 After entering the final frame down a goal, then surrendering another at the 8:46 mark of the third period, Canada pieced together a storybook comeback in rallying for three goals in under seven minutes to secure a 4-3 victory in the gold medal game at the 2020 IIHF World Junior Hockey Championship.

Capping the heroics for Canada was Niagara IceDogs captain and Los Angeles Kings prospect Akil Thomas who netted his first of the tournament at the 16:02 mark of the third period after breaking in and backhanding it by Russian netminder Amir Miftakhov. The tally came shortly after Canada captain and Soo Greyhounds graduate Barrett Hayton (Arizona Coyotes) – who was questionable to dress Sunday – walked in and fired a perfect shot top shelf on the power play to even the score. Hayton was later named Player of the Game for the Canadians.

Also scoring for Canada on Sunday was Lethbridge Hurricanes forward Dylan Cozens (Buffalo Sabres) as well as London Knights centre Connor McMichael (Washington Capitals), while Hurricanes blue-liner Calen Addison (Pittsburgh Penguins) led all scorers with three assists and netminder Joel Hofer (St. Louis Blues) of the Portland Winterhawks once again impressed with a 35-save performance, helping him earn recognition as the Top Goaltender of the tournament, and the first Canadian netminder to do so since Steve Mason (London Knights/Kitchener Rangers) in 2008. Accolades also went to Rimouski Oceanic captain and 2020 NHL Draft favourite Alexis Lafreniere, who added another two assists and was named the tournament’s Top Forward and MVP with 10 points in five games. Hayton joined Hofer and Lafreniere on the tournament All-Star team finishing play with 12 points in seven games.

“I am so proud of this group. The resiliency they showed throughout the tournament is a tribute to the quality young men they are,” Canadian head coach Dale Hunter of the London Knight said following the victory. “This group dealt with everything from injuries to illness to penalties, and they found a way. They bought into the system and gave everything they had for the team.”

Meanwhile, providing the offense for Russia in the closely battled finale included St. Louis Blues draft pick Nikita Alexandrov of the Charlottetown Islanders, who finished with one goal and Player of the Game honours, while Egor Sokolov (Cape Breton Eagles) and Egor Zamula (Calgary Hitmen/Philadelphia Flyers) each added an assist.

Canada’s victory mark its 18th gold medal finish and third in six years following wins at the 2018 and 2015 IIHF World Junior Hockey Championship. It’s also Canada’s first win on European ice since the tournament was last played in the Czech Republic in 2008. In all, Canada has medaled 32 times since 1977, a total which also includes nine silver and five bronze.

Sweden claimed its sixth bronze medal at the World Juniors on Sunday after coming away with a 3-2 win versus rival Finland.

Leading Sweden to victory included Soo Greyhounds graduate and Toronto Maple Leafs first-round Rasmus Sandin who scored his third goal of the tournament Sunday. In all, Sandin finished with 10 points across seven appearances, helping him earn recognition as the tournament’s Top Defenceman and All-Star as selected by the media.

Germany has punched its ticket to the 2021 World Juniors after defeated Kazakhstan 6-0 on Sunday to take its best-of-three relegation series by a 2-1 margin.

Among the goal scorers for Germany on Sunday included Hamilton Bulldogs graduate Tim Fleischer, while Taro Jentzsch of the Sherbrooke Phoenix wrapped up the night with a pair of assists and Yannik Valenti formerly of the Vancouver Giants picked up a single helper.

The 2021 World Juniors will see Austria elevate to the top division in place of Kazakhstan.