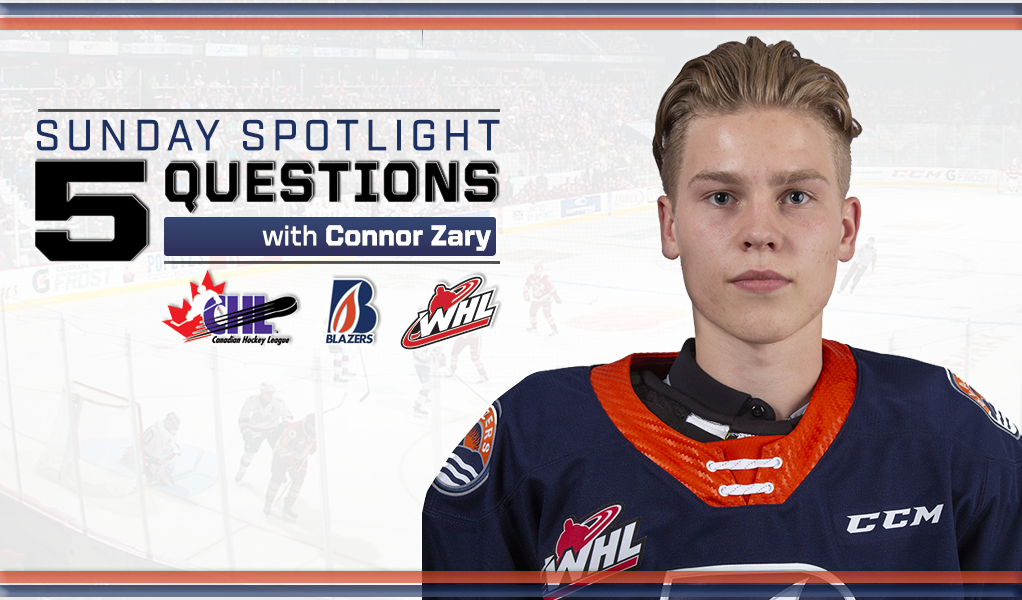 When it comes to listing CHL prospects for the 2020 NHL Draft the only time Connor Zary appears at the bottom of the chart is alphabetically.

The first round candidate has enjoyed a tremendous start to his third WHL season with the Kamloops Blazers and currently ranks inside the league’s top-10 scorers with 48 points through 35 games including 22 goals and powered largely by a 13-game point-streak he started the moment the puck dropped to open the 2019-20 campaign.

That production caught the eyes of NHL Central Scouting who listed the 18-year-old Saskatoon native as an ‘A’ rated prospect in their November Players to Watch list and put him on Hockey Canada’s radar for the CIBC Canada Russia Series as well as receiving an invitation to the National Junior Team Selection Camp in December.

He’s helped the Blazers hold onto first place in the WHL’s B.C. Division and will compete for Team Red at the Kubota CHL/NHL Top Prospects Game on January 16 in Hamilton.

Here’s what Zary had to say about the season so far:

How would you assess the Blazers first half play?

It’s nice to be on top and to be leading the division so far. But there’s a lot of work to be done and I think we’re going to keep moving forward and keep getting better as a team so I’m really excited for the second half.

What’s been the key to your personal success?

I think I’ve enjoyed success this season and it’s been good so far. I’m just going to keep trying to ride that wave and do the best I can to get my name out there and just keep playing to help the team win.

How would you describe yourself as a player?

I think I’m a 200-foot centreman. I play a two-way game. High hockey IQ. I like to make plays obviously with that hockey IQ and I like to score goals.

What’s it been like playing in your NHL Draft season and how much are you looking forward to Hamilton and the Kubota CHL/NHL Top Prospects Game?

Obviously there’s more eyes on you in your draft season and a lot more pressure. You just have to stick to your game and not try and worry about it too much. I’m really excited to get to Hamilton and play in the Top Prospects Game. It’s a game I always watched on TV growing up and over the last few years so it’s pretty exciting I get my chance to go there this year.

What was your best Christmas gift this year?

I’ve got to say I got some new dress clothes, some new style to wear to the rink, so I’m kind of rolling with that one.