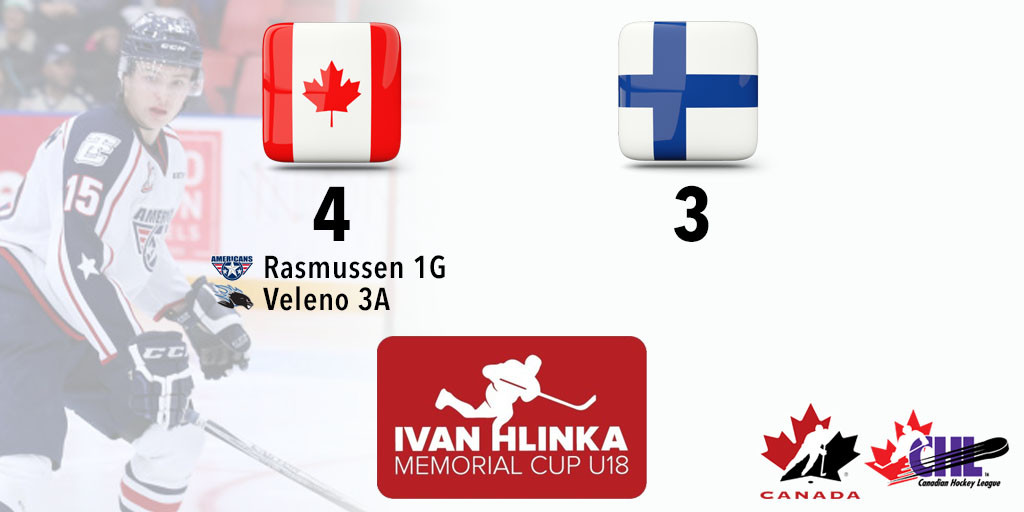 The eight-year run of gold at the Ivan Hlinka Memorial Cup may be over, but a late goal from Michael Rasmussen (Tri-City Americans) ended the tournament on a high note, securing a 4-3 win over Finland as Canada claimed fifth place in the tournament.

Owen Tippett (Mississauga Steelheads) fed Rasmussen at the side of the Finnish net on a two-man advantage with 8:36 remaining in the third period to clinch the victory for Canada.

Sami Moilanen opened the scoring for Finland at 5:04  but Canada would draw even inside the final minute of the first on a goal by Ian Mitchell with assists to Joseph Veleno (Saint John Sea Dogs) and Jonathan Smart (Kelowna Rockets).

Mitchell struck again 2:44 into the second on the power play as Veleno and Maxime Comtois (Victoriaville Tigres) drew assists.

Nick Suzuki (Owen Sound Attack) gave Canada insurance on another power play tally at 9:26 as Veleno collected his third assist of the game.

Finland’s Linus Nyman pulled Finland to within one with 4:58 remaining in the second as Canada led 3-2 headed to the third period.

Santeri Virtanen knotted the score at three on the power play 5:52 into the third frame, but Rasmussen’s winner less than six minutes later would stand as the difference maker.

Canada improved its all-time record at summer under-18 tournaments to an impressive 85-13-6 with the victory.