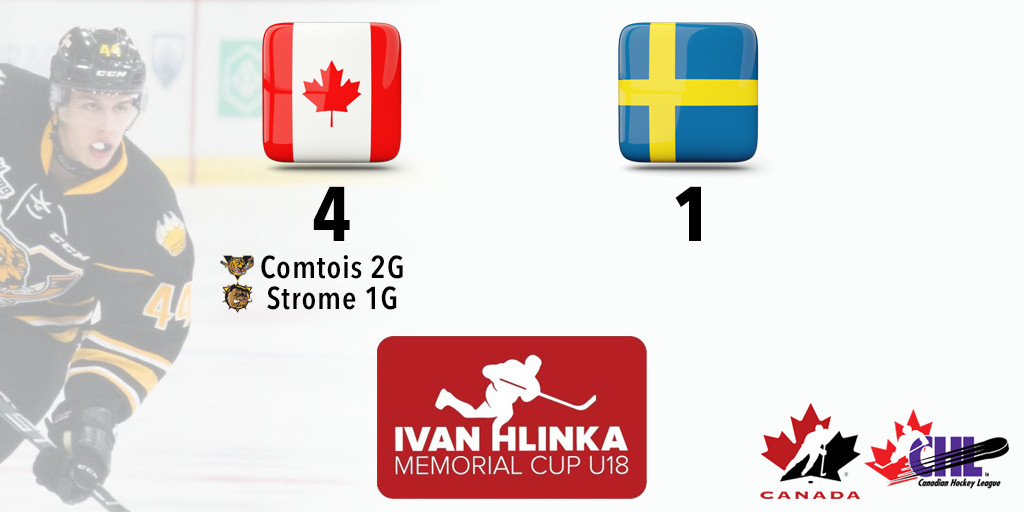 Maxime Comtois (Victoriaville Tigres) continued his impressive Ivan Hlinka Memorial Cup, scoring unassisted shorthanded goals 1:03 apart to wrap up the first period and put Canada ahead for good in a 4-1 win over Sweden.

Canada needed to beat previously undefeated Sweden to keep their semi-final hopes alive and did so, outshooting the Swedes 29-19 while also getting goals from Matthew Strome (Hamilton Bulldogs) and Shane Bowers.

“I think everyone was looking to see how we’d respond after that tough loss [Tuesday],” said Canadian head coach Paul McFarland (Kingston Frontenacs). “I give our guys a lot of credit for how hard they played – they were resilient and really came together as a team.”

Despite the win, Russia’s 5-2 victory over Slovakia later in the day would seal Canada’s fate, eliminating them from medal contention as they’ll face Finland for a shot at fifth place on Friday.

Canada’s run of eight consecutive gold medals comes to an end as Sweden, Russia, the United States and the Czech Republic advance to the semi-finals.