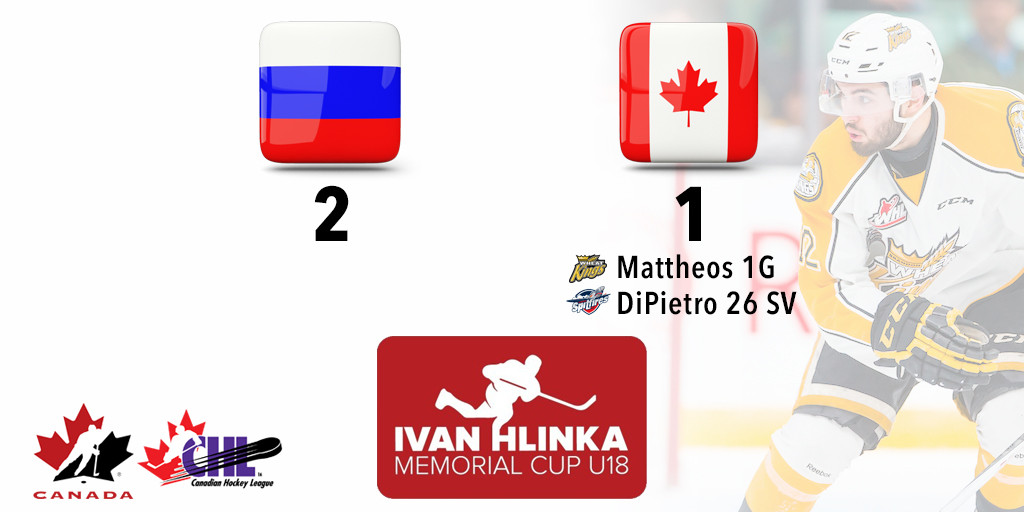 Stelio Mattheos (Brandon Wheat Kings) gave Canada a 1-0 lead inside the opening two minutes of the second period, but the lone goal wouldn’t be enough as Russia surged late to stun Canada on Day 2 of the Ivan Hlinka Memorial Cup in Bratislava, Slovakia.

The two Russian goals came 37 seconds apart as Canada suffers its first defeat against Russia at the tournament since the bronze medal game of the 2007 Hlinka Memorial Cup.

Goaltender Michael DiPietro (Windsor Spitfires) made 26 saves in the loss.

“That’s the best game we’ve played since we’ve been over here,” said Canadian head coach Paul McFarland (Kingston Frontenacs). “Unfortunately, we made one or two mistakes in the last couple minutes – it’s a fine line between two very good teams, but I thought we deserved better tonight.”

Canada will need a win in its final preliminary game against undefeated Sweden on Wednesday if it hopes to compete for a ninth straight gold medal at the tournament.  Livestream is available at http://sport.huste.tv/ with puck-drop set for 8:00 am ET.