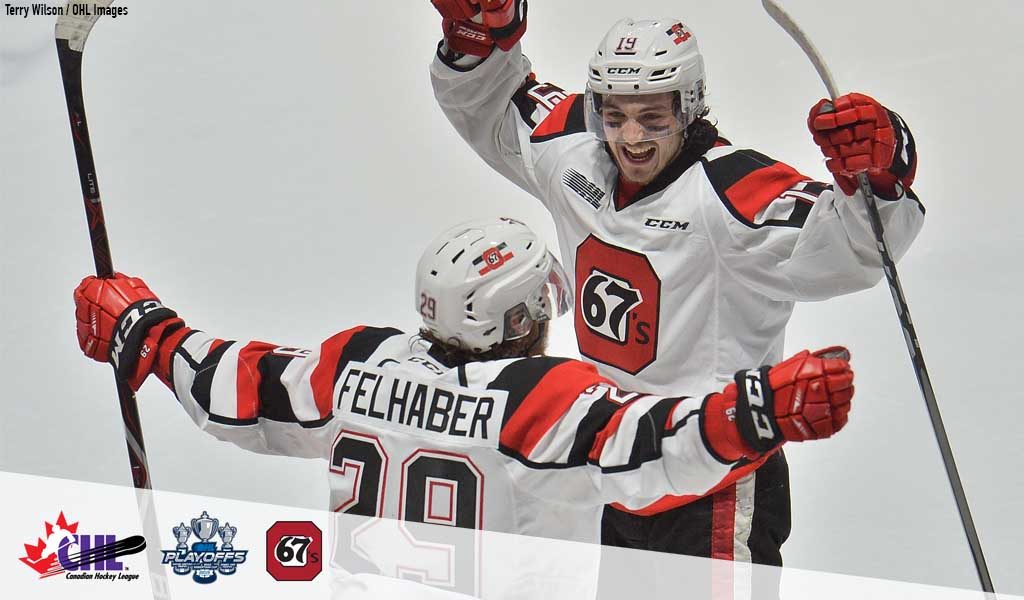 To say it has been a storybook season for Tye Felhaber would be an understatement.

Like many 20 year olds, the Ottawa overager entered the 2018-19 campaign in hopes of closing out his junior career as a winner, and evidently in more ways than one. Not only did Felhaber explode with a career-high 109 points to lead the 67’s and come third in the Eddie Powers Memorial Trophy scoring race, he also finished with 59 goals – only two off the league’s top spot – while tying teammate Austen Keating with an OHL-best plus-56 rating.

It all paved the way for the undrafted free agent to ink an entry-level contract with the Dallas Stars in early March. The hope was for Felhaber to get a taste of pro hockey with the Stars’ minor-league affiliate as soon as this season, but that won’t be in the cards with the 67’s advancing to the OHL’s Eastern Conference Final for the first time since 2005 as they look to punch their ticket to the 2019 Memorial Cup presented by Kia.

Of course, Felhaber wouldn’t have it any other way. In a 60-team league where a majority of careers come to a close after a handful of seasons, the opportunity to win it all is truly once in a lifetime, and the 67’s are in a position to do so with their strong performance this spring, as four-game oustings of the Hamilton Bulldogs, Sudbury Wolves, and Oshawa Generals has the club awaiting its opponent in the OHL Final.

Point to Felhaber’s heroics as a big reason why Ottawa has its sights set on a championship. That was no more evident than when trailing late in Game 4 versus the Generals – and with the 67’s at risk of being shut out for the first time this year – the budding scorer came through on the power play as he evened the game with just 34 seconds remaining to send it to extra time. He then needed just 20 seconds into overtime to bury his second of the night – and second series-clincher of the playoffs – as the 67’s swept the Generals and became just the second team in league history to win its first 12 postseason games.

“Everyone wants to be the guy to step up and I’m just lucky to have a great group of guys supporting me whether I’ve had a bad period or a good period,” Felhaber, whose 11 goals now sit tied for first in playoff scoring, told the Canadian Press following the victory.

After what was a relatively slow start – by Felhaber’s standards – to the postseason, in which he picked up four points in as many games, the latter rounds have seemingly been a breakout for a budding star who is heating up at the opportune time after netting 17 points in his last eight outings to put himself in the running for the Wayne Gretzky 99 Award, presented to the OHL playoff MVP.

In the end, it bodes well for a 67’s franchise hoping to capture its first CHL championship since 1999 – when Felhaber was not yet a year old – and a hometown talent who has continued to impress as he looks to punctuate a prolific career with junior hockey’s ultimate prize.

The Ottawa 67’s advanced to the OHL Final and will compete for the J. Ross Robertson Cup and a chance to enter the 2019 Memorial Cup presented by Kia. Stay tuned for complete OHL playoff preview coverage.