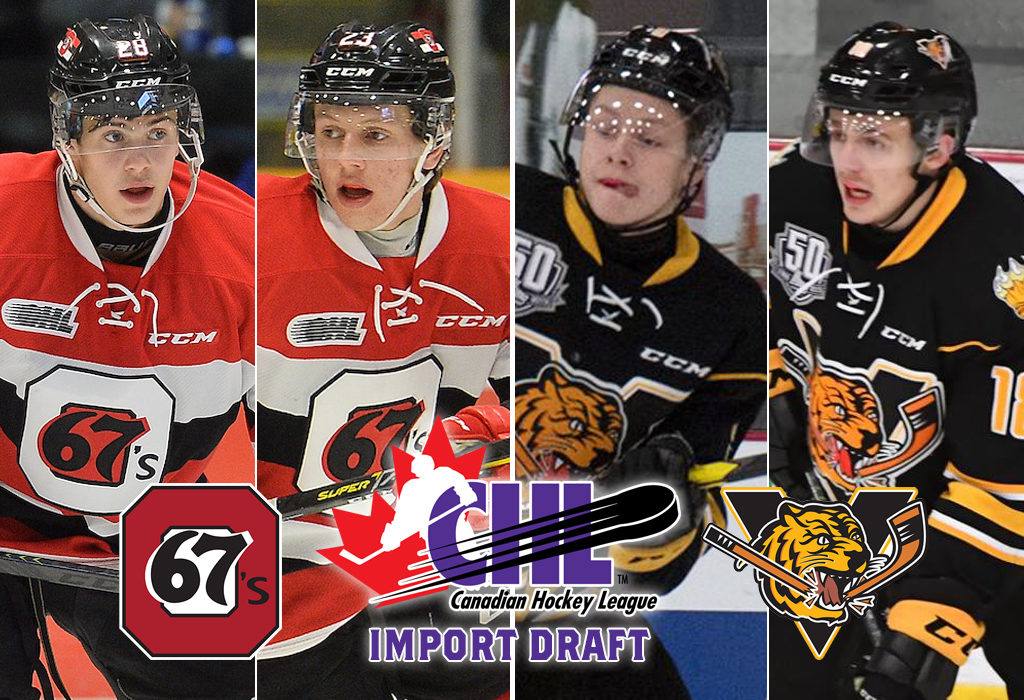 Fifty-eight Canadian Hockey League clubs made at least one selection in the 2019 Import Draft, with the Swift Current Broncos (WHL), Kingston Frontenacs (OHL), and Acadie-Bathurst Titan (QMJHL) leading the way with the first three picks.

The lone two clubs to pass on both selections were the Victoriaville Tigres (Picks No. 21 and 81) and the Ottawa 67’s (Picks No. 58 and 118) – an understandable outcome given both organizations already possess excellent import players and that each CHL club can dress a maximum of two imports each season.

In 2018-19, the 67’s held Austrian-born centre Marco Rossi (2018 selection) and Russian blue-liner Nikita Okhotyuk (2017 selection), with both bringing plenty to the table.

The 17-year-old Rossi finished the season fourth in team scoring with 65 points in 53 games, a total that placed him second among all OHL freshmen as he was later named to the league’s Second All-Rookie Team. Rossi, who is eligible for the 2020 NHL Draft, continued to impress talent evaluators through the postseason as he put up six goals and 16 assists in 17 appearances to help Ottawa set a league record with 14 straight playoff victories.

With the 61st pick, the #NJDevils have picked LHD Nikita Okhotyuk of Ottawa (OHL). pic.twitter.com/R01USeHHfz

Meanwhile, the 67’s also saw plenty of promise from Okhotyuk, a participant in the 2019 Sherwin-Williams CHL/NHL Top Prospects Game who last month was selected 61st overall by the New Jersey Devils in the 2019 NHL Draft. Across 57 contests with the 67’s this season, Okhotyuk was a steady defensive presence while also chipping in offensively with two goals and 15 assists. The 18-year-old has completed two seasons with Ottawa, collecting 28 points in 109 career games.

In the QMJHL, the Tigres also passed up on both of their selections, happy with their previous imports of Russian wingers Egor Serdyuk and Mikhail Abramov, both of whom were chosen in the 2018 CHL Import Draft.

The two provided immediate returns for the Tigres this season, with Serdyuk leading the squad with 65 points, counting 25 goals and 40 assists, as he topped all QMJHL rookies in goals and points to earn a spot on the league’s All-Rookie Team. Serdyuk, 18, possesses incredible vision and a dangerous shot. Alongside his impressive production, it was those qualities that led to his sixth-round selection by the Philadelphia Flyers in the 2019 NHL Draft.

But Serdyuk wasn’t the only member of the Tigres to hear his name called at the 2019 NHL Draft. With the 115th pick, the Toronto Maple Leafs announced their selection of Abramov, another talented forward who wrapped up the 2018-19 campaign with 54 points in 62 games, good for third in team scoring and a place on the QMJHL All-Rookie Team.

It was the latest highlight in a banner year for the 18-year-old Abramov, who was a part of the Russian squad that took home the bronze medal at the 2018 Hlinka Gretzky Cup, a tournament in which he tied for the team scoring lead with seven points in five games.

All four players project to be key performers for their clubs when the 2019-20 Canadian Hockey League season begins in September.