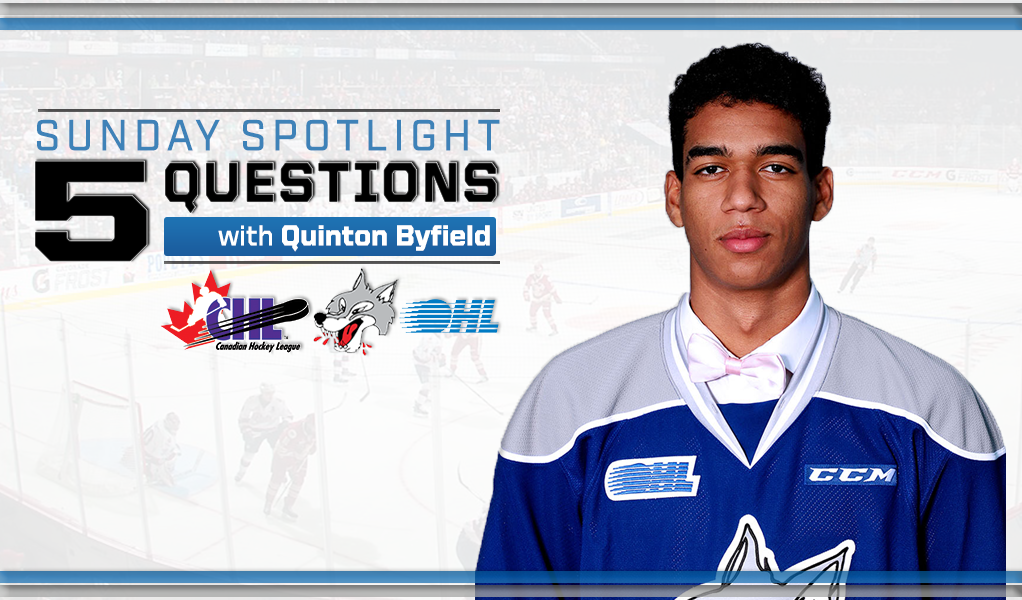 Quinton Byfield is no stranger to draft hype.

The first-overall pick from the 2018 OHL Priority Selection, Byfield made an early impression with a successful rookie season with the Sudbury Wolves in 2018-19 in which he posted 29 goals with 32 assists for 61 points in 64 appearances, earning him recognition as the CHL Rookie of the Year.

This season, Byfield’s torrent pace has continued as he has tallied 27 points counting 11 goals and 16 assists in 13 games. A projected early selection in the coming 2020 NHL Draft in Montreal, Byfield chatted with the CHL about his early success this season and his anticipation ahead of draft day:

You’re the OHL’s top scorer. What’s been going well for you so far this season?

Definitely my linemates are really helping me out. Blake Murray, he is fresh off the draft to Carolina, so he’s playing with a lot of confidence. If I give him the puck I know he’s going to put it in the back of the net. My other linemate, Shane Bulitka, he is one of the older guys and a good leader on the team. He’s also a really good player to play with. We’ve got a lot of chemistry and if we keep playing the way we’re playing then it will all be good.

What’s been the biggest adjustment you’ve made from your rookie season to your second year in the OHL?

I think with one year under my belt I have a lot more confidence. I can hold on to the puck longer and find my teammates a lot more. I worked on my speed and strength and I think that’s definitely contributing to my success this year.

What is your biggest strength as a player?

Honestly, my speed. I’m a bigger guy – I’m 6-foot-4 – but I can skate pretty well. I can move across. I’m pretty shifty out there. I can shield off some big defenders and take it to the net.

What did you learn the most from last season’s playoff run and being around veterans on the Sudbury Wolves team?

We swept the first series against Mississauga so I thought it was going to be easy, but then we ran into a really good team in the Ottawa 67’s. I think we have to learn from that. We can’t take any team too lightly. They are a really good team. We need to keep playing our game and how we’re supposed to, and if we do I think we can take down any team.

Are you exciting for the NHL Draft process to unfold for you and hear your name called in June?

Definitely. I think that’s everyone’s dream when they’re younger, to hopefully get drafted one day, hearing your name and getting called on the stage. It will definitely be special that it’s in Montreal, close to home. If I get to hear my name it will definitely be really exciting.