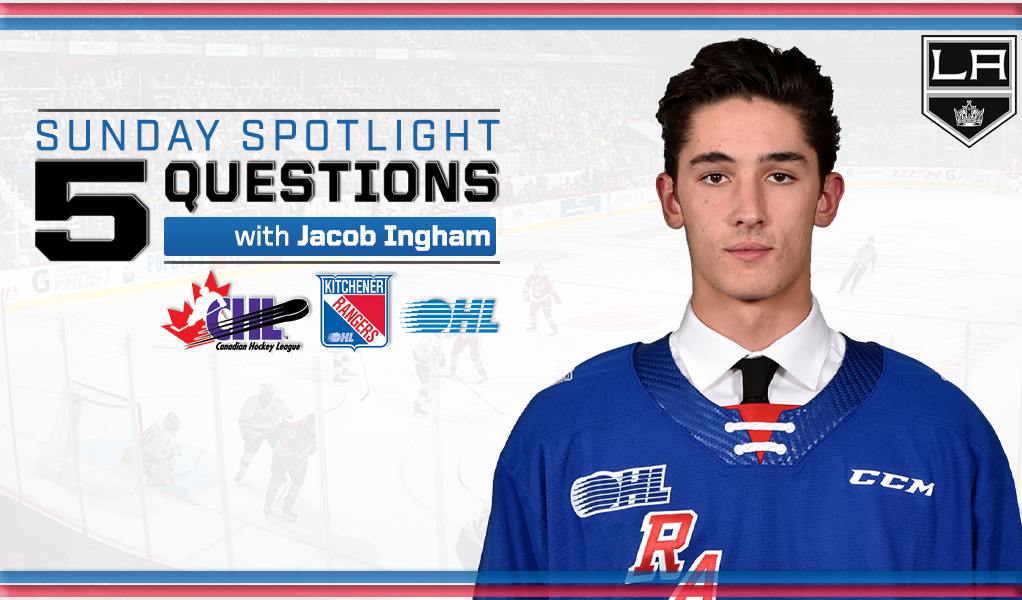 Jacob Ingham has been a difference maker both on and off the ice.

Between-the-pipes, the Los Angeles Kings prospect has helped backstop the Kitchener Rangers into one of the Canadian Hockey League’s top teams currently challenging for first place in the Ontario Hockey League’s Western Conference. In his first season with the blue shirts, he’s carried a personal record of 31-7-4-1 with a goals-against-average of 2.88 and save percentage of .920 with two shutouts.

Ingham has also made an impact in the community with his Jake Saves campaign in support of Canadian Blood Services. His fundraising efforts, which began last season, earned him the first ever Dayna Brons Honourary Award last summer, while the 19-year-old from Barrie, Ont., continues encouraging blood donation as one of the league’s outstanding humanitarians.

Here’s what a busy Ingham had to say about his season:

What’s it like battling for playoff positioning every game in the competitive Western Conference?

It’s not easy. Night in and night out we have to go to rinks in our conference and in our division and play really good games just to try and get two points which are so critical. But just battling every single night kind of gives us that good preparation leading into playoffs, finding importance in every single game, and just trying to get those wins.

How have the Rangers been able to come together and climb the standings with so much success?

Our success has come from within our team so far. It’s come from attention to detail, practice, game days, off the ice, on the ice, and it’s something we’ve been held to with a really high standard with our new coaching staff. I think it’s something that’s really helped us and kind of really brought us more to a team game and completing our game all around.

For you personally, what’s been the key to your success and development between-the-pipes?

Personally I think the key to my success this year is just taking everything one day at a time. Not being too far ahead of myself and looking at what we’ve got ahead. Kind of focusing on our days leading up to games and practicing really hard, and then just working on a little bit of fine tuning in my game in and out, every single day, and just finding ways to get better.

Tell us about your Jake Saves campaign?

The Jake Saves campaign I started at the start of the year, with the help of the Kitchener Rangers, we’re donating $10 per save I make every single game of this year. Right now we’re closing in on $14,000 donated which is pretty impressive. I just want to keep going for the rest of the year and just get as many saves as I can.

Why is blood donation important to you and how does it feel to be making such a positive impact in the community?

Blood donation is so important to me because of my grandparents and their car accident. Becoming a Player Ambassador with Hockey Gives Blood has given me such a great opportunity to use my platform to help out them and help raise the awareness about blood donation. It’s been an amazing opportunity and I can’t wait to keep going. It’s been such a positive thing.