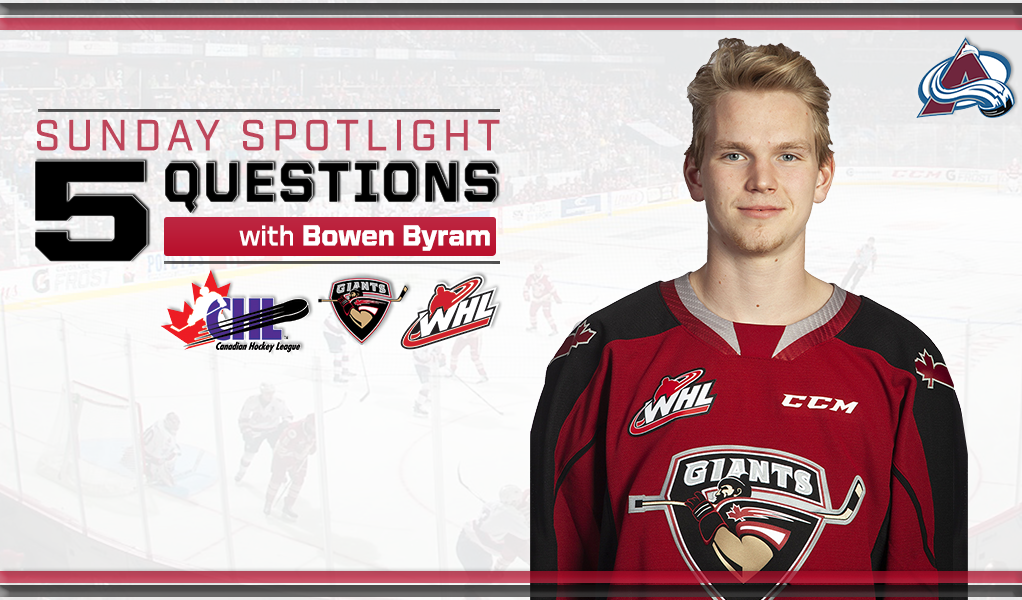 Bowen Byram was a dominant force in last year’s WHL playoffs. The Vancouver Giants defenceman led all skaters with 26 points counting eight goals and 18 assists as he became the first rearguard in WHL history to top the charts in playoff scoring. That performance helped power the Giants to overtime of Game 7 of the Ed Chynoweth Cup Final. Though the Giants ultimately fell short, Byram and his teammates are revving up for another deep playoff run this spring.

As for Byram, he returns to the Giants for his third season with a little added boost after being selected fourth overall by the Colorado Avalanche in this summer’s NHL Draft. That added experience will no doubt prove helpful as he looks to add a championship ring to his junior hockey resume.

Bowen spoke with the Canadian Hockey League about his experience with Colorado and his hopes for this season in Vancouver:

How would you describe your experience in Colorado?

It was super good. Getting to play at a pro level for a prolonged period of time was really good for me and my development as a player and as a person, so I am super grateful for the opportunity.

What’s the best advice you received from Avalanche staff or players?

I think the biggest thing was to make sure I enjoy it. Obviously it can be a pretty stressful time in trying out for a team. I feel like I did a pretty good job of that, sitting back and enjoying my time, but also know that I am competing for a spot on the team. That’s the piece of advice that stuck with me.

What was it like reuniting with your teammates in Vancouver?

It was super exciting. Obviously my goal was to make the Colorado Avalanche, but when I got released back to the Giants, I was super excited to join the team again and see some buddies I hadn’t seen in a while.

What did you learn the most from last year’s playoff run?

How hard it is to win in the playoffs. It’s a grind but, at the same time, it’s the best time of your life. It’s the most fun you have all year. It’s hard to get to the playoffs and it’s hard to win it obviously, so we have a big road ahead of us.

What are your goals for this season?

For myself, I want to win a WHL championship. I want to win a Memorial Cup. That’s kind of how I look at it. On a personal level, I want to make the World Junior team. That’s something I’ve been looking at for a long time now, so that would be super cool if I got the opportunity.