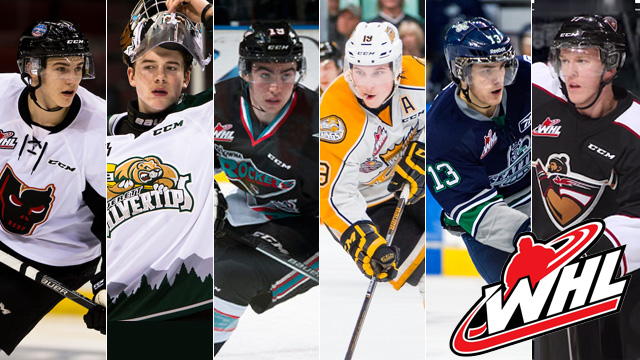 The WHL Champion Brandon Wheat Kings are built for success, returning a strong class of contributors to defend their throne. The Wheaties aren’t alone at the top though, as the Seattle Thunderbirds, Victoria Royals and Regina Pats are just a few of the teams eager to surpass them.

Scotty Munro Memorial Trophy recipients in 2015 and WHL Champions last spring, the Brandon Wheat Kings are loaded up for a third straight year, looking to capture the elusive Mastercard Memorial Cup title they’ve come so close to on several occasions.

Though they outlasted the Seattle Thunderbirds to be crowned WHL Champions for the first time since 1996, Brandon ran out of gas at the Mastercard Memorial Cup in Red Deer, seeing their season come to an end at the hands of the host Rebels last spring.

.@nolan_patrick19 is looking forward to rejoining the #BWK as he recovers from surgery https://t.co/8WrB46Ju6C pic.twitter.com/BmBf2d3Tfy

With top 2017 NHL Draft prospect Nolan Patrick back to lead the way following offseason surgery, the Wheat Kings embark on a new era with long-time coach and general manager Kelly McCrimmon accepting a position with the NHL’s new Las Vegas franchise. Grant Armstrong takes the reins as GM while former assistant coach David Anning will oversee things behind the bench.

With 2016 CHL Defenceman of the Year Ivan Provorov with the Philadelphia Flyers out of training camp, Los Angeles Kings prospect Kale Clague will take the lead on the blue line, joining veterans James Shearer and Jordan Wharrie in trying to fill some of the big minutes left by departed veteran Macoy Erkamps (OTT).

We polled our broadcasters to get their thoughts heading into #WHLOpeningWeek. The results are in!

Brandon will face some resistance from Regina in the East Division, especially if the Pats have the services of overage Toronto Maple Leafs prospect Adam Brooks back in their lineup.

Brooks, who led the WHL in scoring last season, could wind up in the AHL, but John Paddock’s Pats are hoping to see him back in the blue and orange alongside other forward standouts in Sam Steel (ANA) and Austin Wagner (LA). Big 6-foot-4, 225Ib. Ottawa Senators prospect Filip Ahl will be one to watch as a 19-year-old rookie.

Goaltender Tyler Brown returns after being a star performer for the Pats in the playoffs last spring.

A pair of Saskatchewan-based clubs in the Moose Jaw Warriors and Prince Albert Raiders will try and make things interesting.

The Raiders await the fate of star defenceman Brendan Guhle, who will put his best foot forward with the Buffalo Sabres out of camp. The Raiders will rely on the scoring touch of veteran Reid Gardiner and Czech flank Simon Stransky while up-and-coming rookie Cole Fonstad could bloom into a reliable contributor.

The Warriors turn the page following the graduation of Brayden Point (TB) and 2016 WHL Player of the Year Dryden Hunt (FLA). Draft eligible Russian winger Nikita Popugaev looks to build off 47 points (16-31–47) a year ago while Tampa Bay Lightning prospect Brett Howden steps into a bigger role. Rookies Jett Woo and Luke Burzan, the WHL’s fourth and sixth overall picks of the 2015 Bantam Draft, burst onto the scene in Moose Jaw to lead the next wave of Warriors. Goaltender Zach Sawchenko has something to prove in 2016-17 after being passed over in the NHL Draft this past summer.

The Saskatoon Blades and Swift Current Broncos round out the East Division, both looking to take steps forward after missing out on the playoffs last spring.

The Central Division features an emerging Lethbridge Hurricanes club riding at the top of several projections lists for 2016-17. The Canes have turned things around after their six-year playoff drought from 2010-15, winning 46 games under head coach Brent Kisio last season.

Toronto Maple Leafs prospect Andrew Nielsen has graduated, leaving the load on the blue line on the shoulders of overager Kord Pankewicz and a committee that also includes Brennan Menell and Brady Reagan.

Though their back end is somewhat depleted, the Canes feature one of the most exciting young goaltenders in the CHL in NHL Draft target Stuart Skinner.

The Calgary Hitmen are a realistic candidate to stand in the way of Lethbridge repeating as Central Division champs.

Though passed over in the WHL Draft, @JakeBean_2 is proving himself as a scoring defenseman. https://t.co/lHE03RYmX6 pic.twitter.com/f3N7HgGyRw

17-year-old Belarussian defenceman Vladislav Yeryomenko and draft eligible winger Mark Kastelic will both be ones to watch this season.

With Chad Butcher, David Quenneville (NYI) and diminutive draft eligible forward Mason Shaw back in front of veteran goaltender Nick Schneider in Medicine Hat, the Tigers and the Edmonton Oil Kings, who bounced them from playoff contention in a one-game tie-breaker last spring, should be closely matched again this season.

Producers in Brett Pollock (DAL), Brandon Baddock (NJ) and Dysin Mayo (ARI) are gone in Edmonton, leaving a void to be filled by what the Oil Kings hope can be overager Lane Bauer and emerging talent in Davis Koch, Colton Kehler and big blueliners Brayden Gorda and Kyle Yewchuk.

After finishing at the bottom of the WHL standings last year, the Kootenay ICE round out the Central Division, counting on 32-goal scorer Zak Zborosky to give them a boost in their current rebuild. NHL Draft target Cale Fleury leads from the blue line while local product Payton Lee is slated as the man in the crease to start the season.

The Royals, who saw their demise come at the hands of the ever-competitive Kelowna Rockets in a Game 7 thriller last spring, are back for redemption with a star-studded cast.

Top 2017 NHL Draft prospect Cal Foote will be one to watch on the back end along with Washington Capitals first rounder Lucas Johansen and Buffalo Sabres pick Devante Stephens.

The B.C. interior rival Kamloops Blazers enter 2016-17 as an intriguing group, one that nearly upset the Rockets in the first round of the WHL Playoffs last spring.

Big netminder Connor Ingram (TB) could be one of the WHL’s best goaltenders this season as he backstops a defence corps piloted by emerging 18-year-old Dawson Davidson, overager Dallas Valentine and newcomer Joe Gatenby.

The Prince George Cougars and Vancouver Giants round out the B.C. Division, both with new head coaches.

The U.S. Division sees the Seattle Thunderbirds, who came within inches of their first WHL title last spring, back and hungry for more in 2016-17.

Though it remains to be seen if star centreman Mathew Barzal will return from the New York Islanders, the T-Birds have strength in their depth as Keegan Kolesar (CBJ), overager Scott Eansor and new addition Layne Bensmiller headline the offence in front of Edmonton Oilers prospect Ethan Bear on the back end and overage netminder Rylan Toth in the crease.

While Barzal’s return would be a big shot in the arm for Seattle, the Thunderbirds are still a contender to emerge atop the U.S. Division for the second straight season regardless of his fate.

Though Seattle looks good, the U.S. Division title will be hotly contested this season as Everett, Tri-City, Spokane and Portland all bring a competitive edge.

The high-flying duo of Keanu and Kailer Yamamoto returns to lead the charge for the Spokane Chiefs. They, along with centreman Hudson Elynuik (CAR) and promising sophomore Jaret Anderson-Dolan give Spokane a fighting chance under a historically successful coach in Don Nachbaur. Former first overall WHL Bantam Draft selection Ty Smith is also one to keep an eye on as he enters the fold.

The Tri-City Americans have a real prize in 6-foot-5 17-year-old centreman Michael Rasmussen. He and 33-goal scorer Jordan Topping will lead the Amerks up front while former first round selection Carson Focht steps into the picture. Finnish defenceman Juuso Valimaki enters his draft eligible season after recording 32 points (7-25–32) over 56 games last season while standout rearguard Parker Wotherspoon could get an extended look from the New York Islanders after his 56-point (11-45–56) campaign a year ago.

Mike Johnston returns to Portland after spending parts of two seasons behind the bench of the Pittsburgh Penguins. Johnston, who steered the Winterhawks to three separate trips to the WHL Finals in his six-year stint with the club from 2008-14, will oversee a young forward group following the departure of veterans Dominic Turgeon (DET), Rihards Bukharts and Alex Schoenborn (SJ). The Hawks feature Edmonton Oilers prospect Caleb Jones leading the blue line along with 19-year-old Keoni Texeira and Finnish newcomer Henri Jokiharju who is eligible for the 2017 NHL Draft.

The WHL will host Games 1 and 2 of the 2016 CIBC Canada Russia Series this season. Game 1 goes Monday November 7th in Prince George before Game 2 follows on Tuesday November 8th in Edmonton.

While Brandon and Seattle return from their WHL Championship showdown as good bets to contend for the Ed Chynoweth Cup again this season, challengers in the Regina Pats, Victoria Royals and Kelowna Rockets among others should make for an interesting 2016-17 campaign in the Western Hockey League.