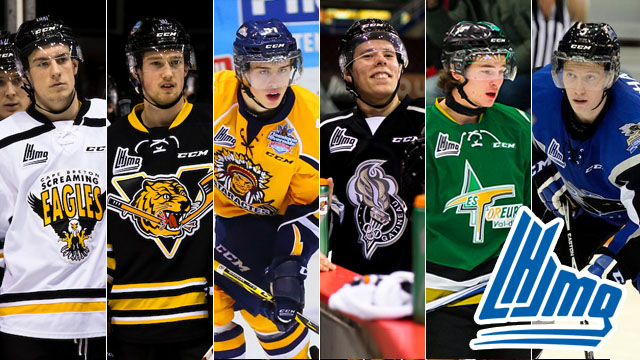 The Saint John Sea Dogs bring big-time talent from the Maritimes Division, but returning President Cup champion Rouyn-Noranda and finalist Shawinigan are winding up for another run as the 2016-17 QMJHL season gets underway tonight.

After a franchise record seven players were selected in the 2015 NHL Draft two years ago, the Saint John Sea Dogs are looking at 2016-17 as a big year, one where those players will form the core of what looks to be a big contender.

Saint John reached the QMJHL Semi-Finals after a thrilling seven game second round series victory over the division rival Cape Breton Screaming Eagles before being ousted in five games by the Shawinigan Cataractes.

The Sea Dogs will start the season as the second ranked team in the pre-season edition of the CHL Top 10 Rankings.

Star forward Daniel Sprong will miss significant time due to offseason shoulder surgery, meaning Ottawa Senators prospect Filip Chlapik will be called upon to pick up the slack along with overage forward Kameron Kielly.

The Halifax Mooseheads, though not expected to challenge for the division title, are a club to keep an eye on under new head coach Andre Tourigny. The Mooseheads will feature an exciting young forward group headlined by returning leading scorer Maxime Fortier, Finnish centreman Otto Somppi and big-time rookie additions in Nico Hischier, Benoit-Olivier Groulx and Jared McIsaac.

With the losses of Russian dynamos Evgeny Svechnikov (DET) and Maxim Lazarev, the Cape Breton Screaming Eagles await the possible return of Pierre-Luc Dubois (CBJ), who will be given every opportunity with the Columbus Blue Jackets out of the gate. Buffalo Sabres prospect Vasily Glotov joins the club up front as a 19-year-old and will be a player to keep tabs on.

The Moncton Wildcats try and place themselves in the thick of the Maritimes Division landscape led by San Jose Sharks prospect Manuel Wiederer. The Cats will spend the early part of the season trying to find a way to replace some of the offence led by back-to-back CHL scoring champ Conor Garland. Undersized twins Kevin and Kelly Klima could contribute to that cause.

The QMJHL’s East Division have a clear early-season favourite in the 2016 President Cup finalist Shawinigan Cataractes, a club knocking at the door with returning stars in Anthony Beauvillier (NYI) and Samuel Girard (NSH).

The Cataractes will lose Toronto Maple Leafs prospect Dmytro Timashov, but names in Alexis D’Aoust, Dennis Yan (TB) and Brandon Gignac (NJ) join Beauvillier up front to form one of the league’s most dangerous forward groups.

Shawinigan’s biggest area of uncertainty early this season comes in the crease as QMJHL all-time shutout king Philippe Cadorette has graduated, giving way to 18-year-old Mikhail Denisov and 2015 second round pick Zachary Bouthillier in the crease.

The Rimouski Oceanic are also looking to overcome the loss of a well-established goaltender, moving on from graduate Louis-Philip Guindon who helped them to a President Cup title in 2015.

As they sort things out in goal, the ‘Nics will lean on an experienced overage forward group led by 2015-16 leading scorer Antoine Dufort-Plante alongside Dylan Montcalm and Tyler Boland. Big power forward Samuel Laberge also returns to the lineup while Montreal Canadiens prospect Simon Bourque leads from the blue line.

“It was meant to be.” –@pascallaberge

The Victoriaville Tigres are an intriguing club, one that could make some noise in the East Division led by Philadelphia Flyers prospect Pascal Laberge whose big showing at the CHL Top Prospects Game helped but him on the radar. Laberge is accompanied by top 2017 NHL Draft prospect Maxime Comtois and potential overage returnee Alexandre Goulet who is attending camp with the Arizona Coyotes and could get a look in the AHL.

Returning 19-year-olds Olivier Tremblay and James Povall give the Tigres two options in the crease as they try and provide the club with the goaltending to challenge the likes of Shawinigan and Rimouski this season.

Carolina Hurricanes prospect Nicolas Roy and the Chicoutimi Sagueneens look to be on the rise following after they took big strides last season. Roy, who has Canadian National Junior Team aspirations, returns after scoring 48 goals last season and is joined by Vancouver Canucks prospect Dmitry Zhukenov in leading the attack. Nashville Predators prospect Frederic Allard leads the defence in front of overage veteran Julio Billia in the crease.

The reigning President Cup champion Rouyn-Noranda Huskies, who forced the London Knights to overtime in the Mastercard Memorial Cup final last spring will be defending their West Division crown and look to have a strong chance of doing so successfully.

“I improved a lot. I gained a lot of great experience.”https://t.co/vO7pA7eprc

The Huskies feature both Jean-Christophe Beaudin (COL) and Martins Dzierkals (TOR) up front along with key returnees in Gabriel Fontaine (NYR) and Alexandre Fortin who will step in to try and fill the void left by graduated captain Francis Perron. The blue line looks equally solid, with returnees in Jeremy Lauzon (BOS), Philippe Myers (PHI) as well as promising 1998-births in Jacob Neveu and Zachary Lauzon.

The Gatineau Olympiques look as if they’ll push the Huskies in the West, with Russian sniper Vitalii Abramov (CBJ) making his return alongside countryman Yakov Trenin (NSH) and Alex Dostie (ANA). Gatineau’s defence is anchored by Colorado Avalanche second round pick Nicolas Meloche who joined the club from Baie-Comeau midway through last season.

The Val-d’Or Foreurs suffered heavy scoring losses to graduation over the offseason, but 41-goal scorer Julien Gauthier, fresh off being selected by the Carolina Hurricanes this past summer, will return to lead the offence. Etienne Montpetit returns to the crease behind veteran defenders David Henley, Jason Bell and Olivier Galipeau.

With star goaltender Samuel Montembeault (FLA) potentially moving on, the Blainville-Boisbriand Armada will have to forge a new identity in the East this season, turning to key addition Jeremy Roy (SJ) on the blue line. Roy will have strong support from returning defenders T.J. Melancon and Pascal Corbeil. Top 2017 NHL Draft prospect Joel Teasdale will be one to keep an eye on up front while 19-year-old Alexandre Alain comes over from the Gatineau Olympiques, looking to play a prominent role offensively.

The CIBC CHL Canada Russia Series comes to the QMJHL for Games 5 and 6 on Tuesday November 15th in Chicoutimi and Thursday November 17th in Baie-Comeau.

The QMJHL will also host the 2017 CHL/NHL Top Prospects Game at Centre Videotron in Quebec City on Thursday January 26th.

With names like Dubois, Gauthier, Chabot, Beauvillier, Girard and Laberge within its ranks, the QMJHL boasts plenty of star power. Add promising young players in Comtois, Teasdale, Antoine Morand (Acadie-Bathurst) and Louis-Filip Cote (Quebec) to the mix and fans and scouts alike have good reason to stay tuned to the Q this season.