19 CHL players selected in first round of 2020 NHL Draft 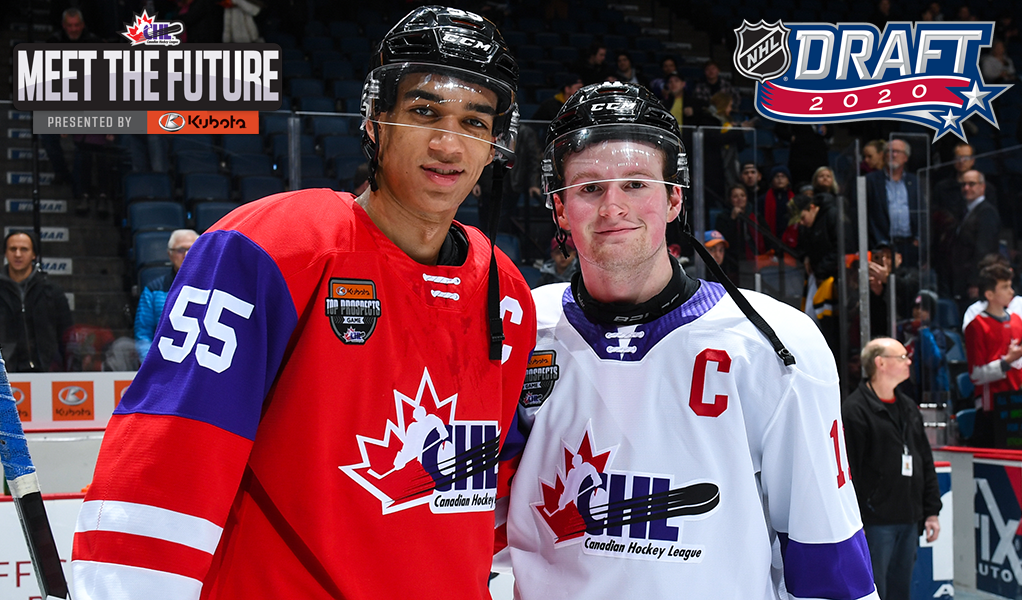 The Canadian Hockey League is proud to announce that 19 CHL players were chosen in the first round of the 2020 NHL Draft on Tuesday night representing over 61% of all selections and the league’s highest opening round total since 2014.

Two-time CHL Player of the Year Alexis Lafreniere of the Rimouski Oceanic led the way by going first overall to the New York Rangers followed by Quinton Byfield of the Sudbury Wolves who went second overall to the Los Angeles Kings.  This marks the first time the CHL has produced the top two picks since Nico Hischier of the Halifax Mooseheads and Nolan Patrick of the Brandon Wheat Kings went one-two in 2017.

Lafreniere was the first of a record 19 Canadian players chosen in the opening round and the country’s first top pick since Connor McDavid of the Erie Otters in 2015.  He’s also the third member of the Oceanic to be chosen first overall following Sidney Crosby (2005) and Vincent Lecavalier (1998), and the first Quebec-born player since Marc-Andre Fleury of the Cape Breton Screaming Eagles (2003).

“Throwing on a Rangers jersey is pretty amazing,” Lafreniere said. “Growing up you dream about being drafted in the NHL and being able to put on this New York jersey is unreal for me.”

Byfield made history of his own at number two becoming the highest Black player ever selected surpassing CHL alumni Evander Kane of the Vancouver Giants (2009) and Seth Jones of the Portland Winterhawks (2013) both chosen fourth overall in their respective years.  The 2019 CHL Rookie of the Year is also the highest member of the Wolves to hear his name edging Mike Foligno who went third overall in 1979.

“Being able to spend it with my family and people who supported me growing up was something really exciting,” Byfield said. “I was definitely anxious coming up to that and hearing my name called was definitely a big relief off my shoulders and I can’t wait to go to Los Angeles now.”

Six CHL players in total were chosen inside the top-10 for the first time since 2015.  The five that followed Lafreniere were all OHL talents which gives the regional league its best top-10 showing since 2010.  Erie’s top ranked defenceman Jamie Drysdale was chosen sixth overall by the Anaheim Ducks, followed by a pair of Ottawa 67’s including Jack Quinn at number seven to the Buffalo Sabres and CHL Top Scorer Marco Rossi at number eight to the Minnesota Wild making him just the fifth Austrian-born player selected in the first round.  CHL Scholastic Player of the Year Cole Perfetti also became the highest player ever to be selected from the Saginaw Spirit when he was taken tenth overall by the Winnipeg Jets.

The first WHL player off the board was Portland forward Seth Jarvis going 13th overall to the Carolina Hurricanes followed by the league’s top ranked prospect in defenceman Kaiden Guhle of the Prince Albert Raiders who went 16th to the Montreal Canadiens.  Guhle was the first of two members of the 2019 WHL champions selected on Tuesday night when joined by forward Ozzy Wiesblatt picked with the 31st and final selection of the first round by the San Jose Sharks.

Other teammates picked in the first round were Chicoutimi Sagueneens Dawson Mercer, who became just the seventh Newfoundlander to be chosen in the first round going 18th to the New Jersey Devils, and Hendrix Lapierre, picked 22nd by the Washington Capitals who traded up with Calgary to call his name.  Two Wheat Kings were also picked including defenceman Braden Schneider at 19th overall to the Rangers following a trade with the Flames, and forward Ridly Greig picked 28th overall by the Ottawa Senators.

Tyson Foerster, the breakout star of the 2020 Kubota CHL/NHL Top Prospects Game, was part of a run of seven straight CHL players following Lapierre in going 23rd overall to the Philadelphia Flyers making it three straight years a Barrie Colt has been chosen in the first round which represents the league’s longest active streak.  Connor Zary of the Kamloops Blazers was selected by the Flames who held on to the 24th overall pick, while Justin Barron became the first Mooseheads defenceman ever chosen in the first round going 25th to the Colorado Avalanche.  Jake Neighbours of the Edmonton Oil Kings then went 26th to the St. Louis Blues, and Jacob Perreault of the Sarnia Sting went 27th to the Ducks before the streak of seven ended with Greig.  Two picks later it was Mavrik Bourque of the Shawinigan Cataractes at 30 to the Dallas Stars.

From the three CHL leagues this was the second straight season in which the WHL counted seven picks, while the OHL also saw seven for the first time since 2018, and the five QMJHL players chosen is their highest since 2015.  By position, 15 of the CHL players chosen were forwards and four were defencemen.  Of the four CHL teams to develop multiple first round picks, the 67’s have done so on seven previous occasions since 1972 including most recently in 1997, while the Wheat Kings did it last in 2009, the Raiders last in 1995, and the Sagueneens last in 1981.  This season also marks the first time Chicoutimi has had a first round pick since 2005, the Wolves and Spirit since 2006, and the Blazers since 2007.  The 19 Canadian players selected includes four World Junior gold medalists in Lafreniere, Byfield, Drysdale, and Mercer, and is a total last reached in 2003 when there were only 30 first round picks.

CHL Players Selected in the First Round of the 2020 NHL Draft:

Click on a player name above to watch a video profile from the #MeetTheFuture series presented by Kubota Canada.  The 2020 Kubota CHL/NHL Top Prospects Game played January 16 in Hamilton was the 25th annual showcase of NHL Draft eligible talent and featured 17 of the 19 first round picks with Lapierre and Barron both invited but unable to compete due to injury.