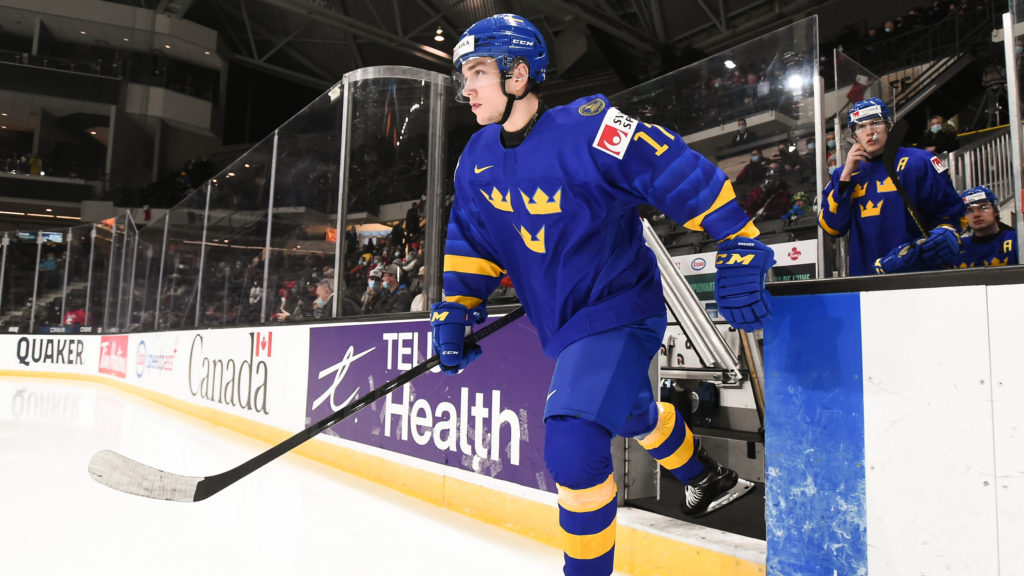 The 2022 World Juniors are finally here.

After December’s tournament was cancelled four days in, the competition starts anew this afternoon from Edmonton.

Canada is in Group A alongside Czechia, Finland, Latvia and Slovakia. Latvia will replace Russia who have been banned from international play because of its invasion of Ukraine. Group B features Austria, Germany, Sweden, Switzerland and the USA.

The Americans are the defending champions after they beat Canada 2-0 in the 2021 gold medal game. It was just their fifth gold medal at the tournament and first since 2017. Canada’s 18 gold medals are the most all-time.

The tournament will see 64 CHL players involved with at least one representative on every participating team. Forty-two CHL franchises are represented while 24 players are from the WHL, 21 from the QMJHL and 19 from the OHL.

Canada features a tournament high 23 CHL players but the quality on display will be visible across all 10 nations.

Everyone knows the name Connor Bedard. Yes, he’s the consensus top pick for the 2023 NHL Draft. He became the youngest player in WHL history to score 50 goals in a season when he tallied 51 last season with the Regina Pats. Furthermore, he notched 100 points in just 62 games and was named to the WHL’s East Division First All-Star Team.

But it was possibly his incredible four-goal performance in December that truly opened people’s eyes to his incredible talent as he dominated for Canada in an 11-2 win over Austria. At the time, Bedard became the youngest player ever to score four goals in the tournament. Unfortunately, due to the tournament’s cancellation, those statistics don’t officially count, but the memory certainly lives on.

Cormier is arguably the best defenceman in the tournament.

Just how good is the Charlottetown Islanders d-man? He has won back-to-back Emile Bouchard Trophy’s as the QMJHL Defencemen of the Year. He is a two-time QMJHL First All-Star Team selection.

In what looks more and more like a steal every year, the Vegas Golden Knights snagged Cormier with the 68th overall pick in the 2020 NHL Draft.

Demek enters the 2022 World Juniors on the back of a successful rookie season in the WHL.

In 55 games with the Oil Kings, Demek notched 54 points (20 goals) before he finished in a tie for third in postseason scoring with 17 points as he helped Edmonton win its third Ed Chynoweth Cup as WHL Champions.

Demek, who was selected by the Golden Knights in the fourth round in 2021, will be relied upon heavily to provide offence for the Slovaks.

A special season for Dufour was capped with a Memorial Cup title in June.

The New York Islanders prospect won the Michel Briere Trophy as QMJHL MVP in 2021-22 as he led the CHL with 56 goals in the regular season. He’d then add the Stafford Smythe Trophy to his collection after a dominant Memorial Cup where he led the Sea Dogs with eight points and was named to the tournament’s All-Star Team.

Dufour is one of nine players added to Canada’s roster who were not originally selected in December.

The Swede, who was the 21st overall pick in the 2021 NHL Draft by Boston, also tallied a WHL high 17 assists during the postseason.

Fresh off of an OHL Championship, Mysak is set to play in his third World Juniors.

Mysak had 64 points in the regular season with Hamilton while his 34 goals were tied for the second most on the team. Of his 34 goals, 15 came on the power play, the third most in the OHL.

He’d add 11 points in the postseason and scored twice in the Memorial Cup as the Bulldogs reached the final.

The Montreal Canadiens prospect will captain Czechia for the third straight time at the tournament.

Olausson will play in his second World Juniors as he looks to guide Sweden to its first gold medal since 2012.

His rookie OHL season was split between Barrie and Oshawa where he notched 49 points (26 goals) in 55 games.

Olausson, the 28th overall pick by Colorado in the 2021 NHL Draft, was the first Swede selected in the first round to play in the OHL since Adam Boqvist in 2018.

A dominant first OHL season saw Pastujov lead the Storm in scoring with 34 goals and 76 points.

The 66th overall pick in 2021 by the Ducks is one of two CHL players on the American squad (Andrew Oke/Saginaw).

Spacek’s splendid rookie season in the QMJHL was rewarded with the Raymond Lagace Trophy as the league’s defensive rookie of the year.

His 50 points led all rookie d-men, as did his 38 assists. The 19-year-old was one of nine defencemen to record at least 50 points last season.

A difference maker on the man advantage, Spacek’s 20 power play assists were tied for the second most in the QMJHL.

He was the first Kamloops skater to tally more than a 100 points in a season since Colin Smith in 2012-13 while his 45 goals were tied for the 27th most in a single campaign.

The 19-year-old also tallied the most goals (17) and points (31) in the WHL playoffs, was selected to the B.C. First All-Star Team and took home the Brad Hornung Trophy as the WHL’s Most Sportsmanlike Player.